Name: Emanuel Charles
Subject: Physical Education
Previous Jobs: waiting tables
Came to Blair in: 1991 as a student and 2004 as a teacher

At first glance, the guy leaning against the gym's wall, exchanging daps and a quick "What's up?" with the tall basketball players that walk by him, looks like a fellow student, ready to follow them on the court and "play some ball" with them. But in fact he's there to supervise the boys during open gym. The guy is Emanuel Charles, a second year Physical Education teacher at Blair. 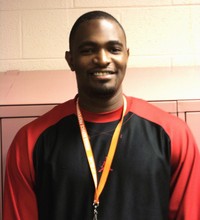 Don't think you can fool him because he's a newcomer, however; he's had experience with being a first-timer at Blair before. Charles first walked down Blair Boulevard as a freshman in 1991.

In those days, being a teacher had never crossed his mind. "No way did I want to be a teacher!" he laughs. Young Charles had other goals on his mind, like becoming a pro-athlete in one of the many sports he participated in during high school. "I played volleyball, football, basketball and ran track. Basketball was my main passion, though," he says, motioning to the court.

Even if Charles wouldn't have made it all the way to the NBA, he's certain he would have played college ball for the Maryland Terps if a drastic football injury during his junior year had not erased his chances. "I broke my foot playing football for Blair in '94. It was pretty serious. I had to have reconstructive surgery. There are still some screws and plates in there," he says.

Being an all around star athlete at Blair in the 90's meant Charles had his share of coaches. Do the names Changuris, Miller, Short, Hall, or Wilson sound familiar? Cynthia Changuris, Charles's current boss, was originally his volleyball coach until his injury. Malik Wilson and Wendell Hall were the basketball coaches when he was a starting power-forward on the team, and Dale Miller and Jimmy Short were his football coaches. Back in 2004, Charles came to Blair for his first day with relationships waiting to be rekindled and a legacy behind him.

Although he never initially planned on becoming a teacher, Charles is really happy that he indeed found his calling. "It's great when you love what you do," he says. Teaching Physical Education is, in his opinion, the most fun you can have being a teacher because you get to interact with the kids instead of "just standing up in front of a white board lecturing." Throughout the day, Charles does a lot of interacting. "I always join in no matter what sport it is. The kids play harder when I do because they want to beat me," he says smiling.

There are more and more basketball players on the court as 5th period goes by. They're long, athletic, driven and they all respect Mr. Charles. For a second, it's impossible to tell whether the year is 1995 or 2005...