The West Montgomery County Citizens Association (WMCCA) has a pending lawsuit against Montgomery County on behalf of Nick's Farm , an organic farm in Potomac, Md. The WMCCA claimed in the lawsuit filed Nov. 13 that the Board of Education (BOE), the landowner, violated the Open Meetings Act, which requires local public bodies to hold their meetings publicly, by withholding information about decisions regarding the 20-acre farm. Nick's Farm has inspired a movement against the use of the land as Montgomery Soccer Inc. (MSI) soccer fields. 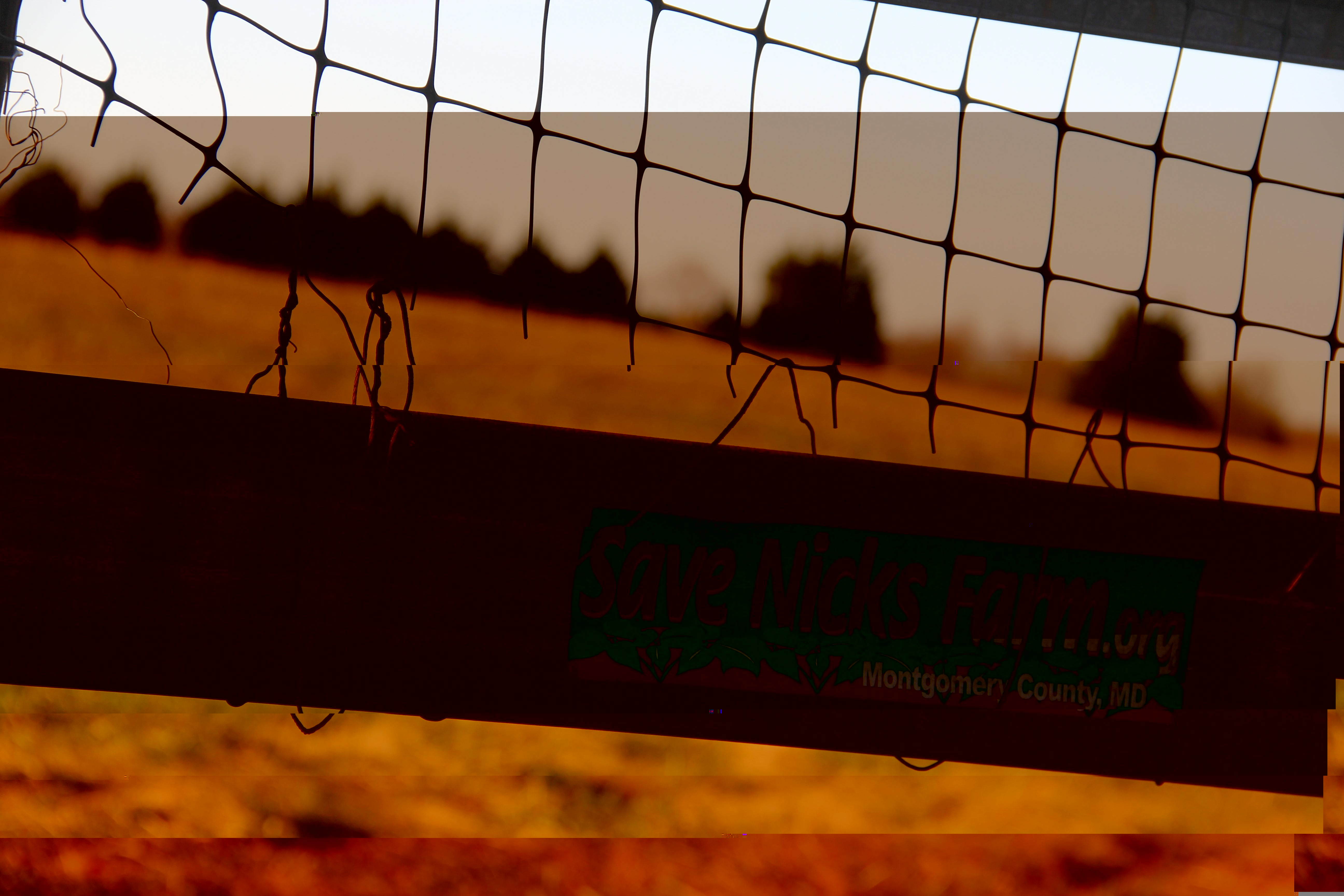 Photo: A "Save Nick's Farm" bumper sticker clings to the fence around Nick Maravell's Potomac farm.

Nick Maravell, the owner of Nick's Farm, has leased the land from the BOE since 1979. However in 2011, the BOE decided to lease it to Montgomery County, who in turns intends to lease it to MSI. According to Maravell's daughter Sophia Maravell, court cases and community support have allowed them to continue using the land. In January, she created Brickyard Educational Farm on the site, which currently consists of a garden and a flock of chickens.

Sophia hopes that as Brickyard expands, it will be able to provide a farm incubator program and other programs for Montgomery County students to learn about the dangers of genetically modified foods and chemical-free farming practices in general. "Brickyard is important for the health of our schoolchildren, to train the next generation of sustainable organic farmers, if we want to see organic farms survive in the future," Sophia said. She emphasized that Nick's Farm is not involved with the current lawsuit.

The WMCCA stated that the fight over the land has cost Montgomery County taxpayers thousands of dollars. The group claims on its website that "the Board of Education has been spending taxpayer money in excess of $200,000 in related legal fees on this 18-month long struggle for an open process."

The Brickyard Coalition is an umbrella group composed of different organizations and citizens, including the WMCCA, the Civic Association of River Falls (CARF) and the Brickyard Road Citizens' Association. Curt Uhre, a spokesman for the Brickyard Coalition, stated that the WMCCA offered to settle the lawsuit but the county declined. "We feel those dollars as taxpayers could be spent for much better purposes, but they refused to do that and we have no choice but to continue with legal action," Uhre said.

Blair chemistry teacher Elizabeth Levien is very passionate about the Nick's Farm movement, advocating the continued use of the land as an organic farm. "I was so surprised to learn about the existence of such an incredible place like Nick's Organic Farm here in Montgomery County and was even more shocked to learn that our county actually was considering bulldozing it to make our county's 502nd and 503rd soccer field," Levien said.

Despite the opposition to the use of the land as soccer fields, MSI will continue to advocate for the project. According to MSI's website, the organization "believes that the benefits of this project far exceed the concerns raised by opponents of the project, most of whom are nearby neighbors to the proposed project's site."

Maravell hopes that the lawsuits will end with a reconsideration of the land, resulting in the judge allowing Brickyard Educational Farm to stay. "The best outcome would be for this process to go back to the table and for possibilities and ideas for the land to be put on the table and to have an open public process so that Brickyard could actually be considered," Sophia Maravell said.

Levien would also like to see the farm remain on the land. "Ever since I volunteered on organic farms in Italy after college, I have been very passionate about growing my own food. I think it's really important that our community has access to healthy, local and, if possible, organic food," she said. She encourages any passionate students to spread the word about the movement and write letters to the superintendent, Joshua Starr, County Executive Ike Leggett, Board of Education President Shirley Brandman or members of the school board.