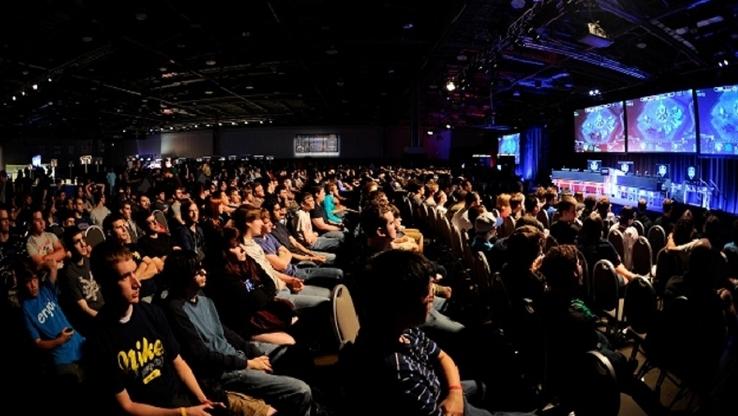 Photo: A crowd watches a live tournament at an MLG event in Columbus, Ohio

Photo: A crowd watches a live tournament at an MLG event in Columbus, Ohio

Gaming has been, for its brief lifespan, a fringe activity for which most people have no use except to blow off steam after a long day. But for some, it is a job. Professional gamers depend on advertising and sponsorship, so the move that gaming has made towards the mainstream has begun to benefit them greatly. This success has increased so much that top players such as Ilyes "Stephano" Satouri have a rumored income of over $200,000 for playing the real time strategy game Starcraft 2. Despite this huge success, major mainstream companies in the U.S. have, for the most part, stayed away from sponsoring professional gaming tournaments in which players from various teams compete in a bracket until the finals, which are held in front of a live audience. However, this is now changing, as CBS Interactive has announced that they are going to be in control of all advertisements for Major League Gaming (MLG), as well as considering broadcasting Starcraft 2 on TV, which would be a first for North America.

Having a large company like CBS becoming invested into professional gaming shows a trend of larger companies investing into the gaming market. The role that they play will be extremely important to MLG as well as their other partners because they will create greater public interest as well as have deeper pockets from which to draw in supporting events. CBS will primarily bring its advertisement sales team to the table with this deal, with which they will fill the advertisement space at tournaments for the video games using TV-like segments on live streams or product placement at an actual event. Having the larger companies that the CBS sales team will ultimately secure has the potential to be a great boon to MLG.

Funding from venture capitalists has kept the company alive thus far but has yet to turn a distinct profit despite experiments with different revenue models. Mixes of pay-per-view, advertisement segments and sponsorships have not worked, so they are hoping to draw upon others' experience. These larger companies will definitely bring more weight to the credibility of gaming events and have deeper pockets to invest in events. This could increase popularity and viewers, and even make it possible to broadcast without pay-per-view, which limits audiences.

The main benefit of a deal with a broadcasting company such as CBS, and the area with the largest potential for E-SPORTS, is broadcast television. Concerning having events on television "there's definitely going to be an opportunity for us to be looked at by the broadcast network that is CBS on the traditional media side" said CEO of MLG Sundance DiGiovanni in an interview with Forbes. One of the great separations between E-SPORTS and more mainstream sports has been their availability on TV, as they were streamed exclusively on the internet in the U.S. Moving to broadcast television makes advertising much more attractive, allowing these events to grow.

Ultimately, the CBS partnership is a huge step for the credibility and recognition of the popularity of E-SPORTS. Bringing larger companies with long histories and powerful connections will serve to increase viewership and allow E-SPORTS to grow in the U.S. just as they have done in other countries, but that future is still far off.