Officials in the Montgomery County Department of Transportation met with residents on Nov. 29 to discuss the proposed addition of 50 new bikeshare stations along the Metro's Red Line. The new stations would be focused in urban areas such as Silver Spring, Takoma Park, Wheaton, Forest Glen and Bethesda. 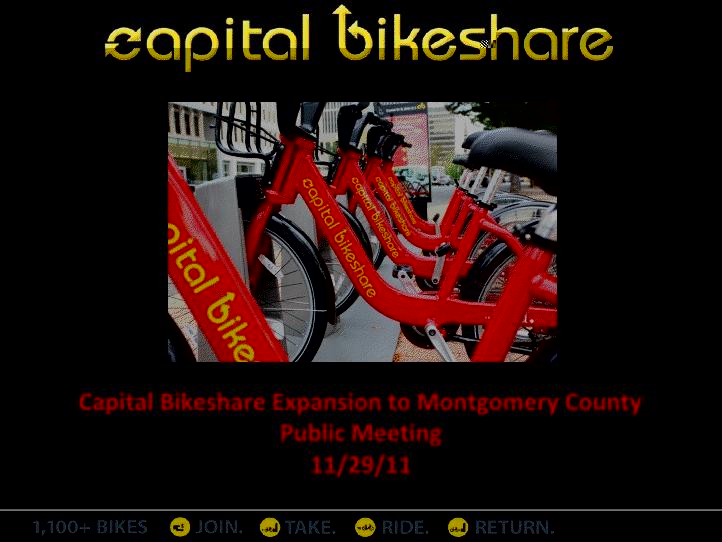 Photo: If the program goes into effect, County residents will have access to bikes like these in order to make their commutes easier.

Photo: If the program goes into effect, County residents will have access to bikes like these in order to make their commutes easier.

The two-year-old bikeshare program is run by Capital Bikeshare, which is based in D.C. and Arlington County and operated by Alta Bikeshare. John Lisle, Director of Communications for the District Department of Transportation (DDOT), said the program would simplify commuting in the Montgomery County area. "What we're trying to encourage people to do is called the 'last mile,' which has do with commutes, and it's the idea that if you get off the metro and you still have one mile to go to your house you'll use a bike," he said. "We're trying to get people out of their cars for those short trips."

These stations will be equipped with approximately 400 new bikes and could open as early as next winter if the project receives funding and approval. Funding could come from a Maryland Bikeshare Program grant, which the County is currently applying for. This grant would cover 80 percent of the project costs and would go towards fiscal year 2013.

Lisle said that the current bikeshare program allows new areas to add themselves, and he thinks Montgomery County is a good fit. "Anyone can join; they decide within their jurisdiction," he said. "[Montgomery County] is not as urban as the district, but it is still a high-density area, and there's also more congestion because of the high density, so I think it's a good match for the program and hopefully they'll join. I think it's great to have more of our neighbors joining the program."

The bike stations themselves, according to the project team, will be solar-powered and feature a kiosk and a map panel. These stations are only supposed to be 50 percent full for maximum function. Vans are used to collect the bikes and redistribute them to the appropriate stations. Costs range from the 11-dock station, which holds six bikes and is projected to cost $40,000 to install and approximately $15,000 to operate annually, to the 19-dock station, which holds 10 bikes and will cost $57,000 to install. This amounts to approximately $26,000 more per year.

Lisle added that, ideally, the program will give people access to a hassle-free and environmentally friendly mode of transportation. "Convenience is one of the benefits as well. You can take a bike instead of getting in the car and it's easy to go where you need to go, lock up the bike, turn it in and you're done," he said. "It's obviously green too – there's no carbon footprint from the bikes."