The Montgomery College Student Senate (MCSS) held the Community Conversation on Deferred Action for Childhood Arrivals (DACA) on Monday, Sept. 18. The event was held from 4-6 p.m. in the Cultural Arts Center at the Takoma Park/Silver Spring campus of Montgomery College.

DACA was an immigration policy issued by former president Barack Obama, repealed by the Trump administration on Sept. 5. According to Trump's announcement, DACA participants have one month to renew their status and Congress has six months to devise a replacement for DACA. 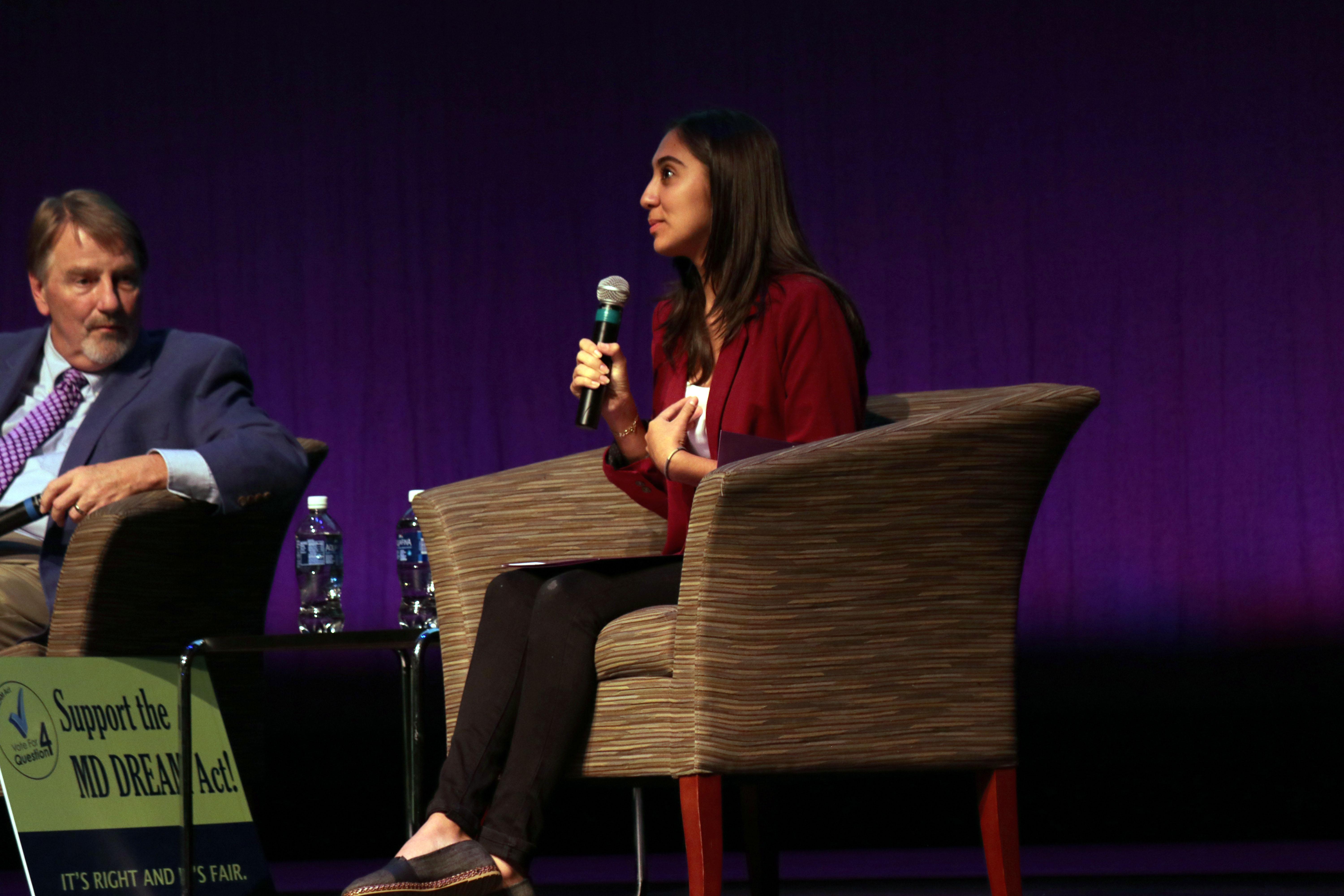 Photo: Kleily Castro shares the perspective of a DACA recipient at the Community Conversation on Deferred Action for Childhood Arrivals

Photo: Kleily Castro shares the perspective of a DACA recipient at the Community Conversation on Deferred Action for Childhood Arrivals

The Community Conversation began with a brief introduction explaining DACA, followed by a screening of the documentary "The Dream is Now" . A panel featuring DACA recipient Kleily Castro, immigration lawyer Don Mooers and Provost and Vice President of the Takoma Park/Silver Spring campus, Brad Stewart, led a discussion and answered questions about immigration after the screening.

According Student Senate treasurer Jazmyn Gant, the purpose of the Community Conversation was to educate undocumented students of their rights and to show support for those students. "Our main goal of this whole event was three things: educate, support, and advocate," Gant said.

Since the administration gave a small window for recipients to renew their DACA papers, MCSS wanted to act fast in order to inform the public. "The reason we had to do it on a Monday was because we were moving fast. We could have done it on a Wednesday and gotten more turnout, but we wanted to do it as fast as possible," Hubert Smith, Senator at Large, said.

MCSS Vice President and Chair of Senate Activities Board, Rashani Ward Williamson, inferred the reason for the low turnout. "Our marketing and advertising was very limited, and I think with more time and more preparation it could have been a way bigger crowd," she said.

The MCSS estimated around 300 students at Montgomery College benefit from DACA. In order to establish a supportive community, the MCSS invited both DACA recipients and non-recipients to the event. "A lot of people don't exactly understand what DACA is, that was shocking to me. People hear about it all the time, but aren't aware of what it is and how it affects lives," Castro said.

Loraine Hutchins, a Montgomery College professor, attended the event to support students and become better educated on DACA. "It's devastating because the people I know who are DACA Dreamers are some of the most beautiful people I've ever met. They are strong, caring and compassionate people," Hutchins said. 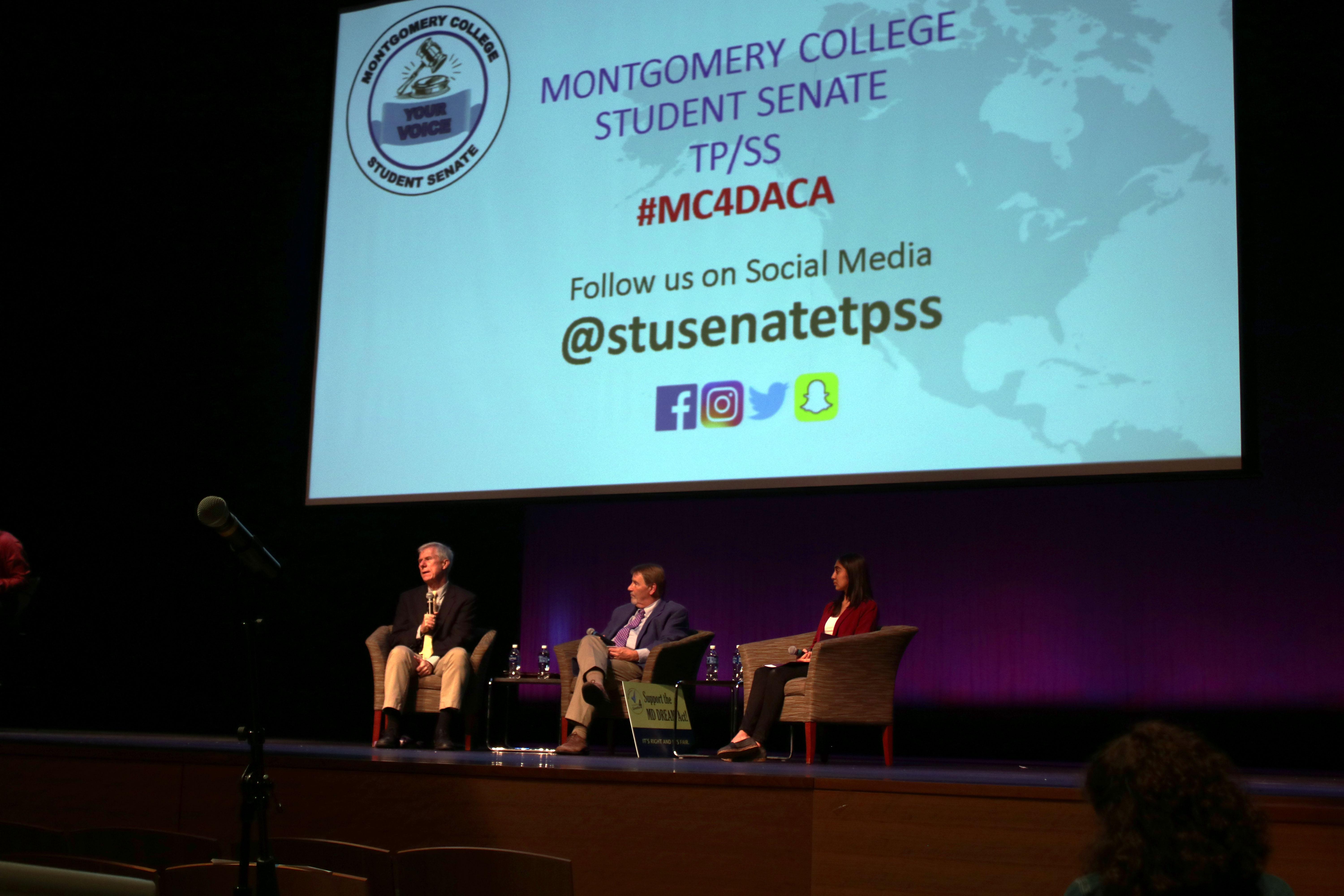 Photo: Members of the panel offer answers to questions from the community at the Community Conversation on Deferred Action for Childhood Arrivals

Photo: Members of the panel offer answers to questions from the community at the Community Conversation on Deferred Action for Childhood Arrivals

Additionally, members of the greater community outside of campus went to show support. MCSS Vice President and Chair of the Student Senate Activities Board, Rashani Ward Williamson, praised the Student Senate for opening the event to the entire community. "We did have some of our Takoma Park community that isn't affiliated with the college come to listen in. It shows that the Student Senate is not just focused on the campus, but the community as a whole," Williamson said.

Montgomery College has measures in place to protect undocumented immigrants. The Davidson Scholarship fund is being used solely for DACA students this year. In addition, Montgomery College is covering the $495 fee to renew DACA paperwork for all students.

The MCSS plans to keep fighting for their undocumented students. "We're already planning a letter drive where we will write letters to Congressmen and Senators and send them out," Smith said. Additionally, events have been planned at Montgomery College's Rockville and Germantown campuses.

Williamson hopes to have more events to show support, involving getting in contact with politicians. "I asked about bringing the people running for mid-election onto campus, just so students know who to vote for, and why they're voting for that person," she said.

Smith emphasized the need for events like this in order to strengthen the community as a whole. "If we continue to air out our concerns and invite people to talk about the problems, we'll have a community that is sensitive and receptive to information, " Smith said.