Music documentary is provocative and interesting

Rock stars: Something about their extravagant lifestyles and rebellious attitudes makes them fascinating to many. However, in the documentary "DIG!", there is another side of rock musicians shown, a human side, including their relationships and the highs and lows of their careers. 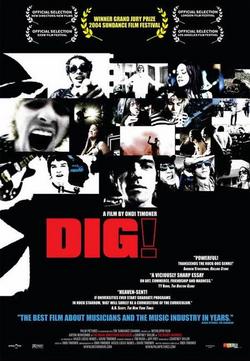 The film follows two bands, The Dandy Warhols and The Brian Jonestown Massacre, through the years 1995 to 2002. Over these seven years, "DIG!" details the work and the front men of both bands, Courtney Taylor of The Dandy Warhols and Anton Newcombe of The Brian Jonestown Massacre. "DIG!" shows how Taylor and Newcombe's friendship morphs into enmity over time.

"DIG!" tells the story of the two bands' relationship perfectly through a unique narration, which is a mix of commentary from band members, music critics, record executives and even family, friends and fans of the groups. The commentary presents varied perspectives that keep "DIG!" balanced. Taylor also occasionally provides a voice-over to bring his opinion to the documentary's topics.

Although the main focus of "DIG!" is the rapport between the groups, the film also documents many other absorbing and, at times, shocking historical facts of the bands. "DIG!" takes a deep look into the The Brian Jonestown Massacre's serious problems with drug addiction, the band mates' unstable relationships with each other and Newcombe's troubling childhood, which was riddled with arrests and family problems. With The Dandy Warhols, the film focuses a lot on the band's affiliation with their record company, Capital, and their own rise to commercial success.

"DIG!" isn't all about the dark side of musicians' lives. The film also shows many of the joyous aspects of making music.

Clips from recording sessions, concerts and parties show the creativity and exhilaration surrounding the bands' existence. Although some of these sometimes degenerate into violence, even the arguments are occasionally amusing. Other humorous footage includes the many shenanigans of Joel Gion of The Brian Jonestown Massacre and the hectic making of The Dandy Warhols' "Not If You Were The Last Junkie On Earth" music video.

Thanks to director and film editor Ondi Timoner's flawless effort, "DIG!" flows smoothly, incorporating everything seamlessly. Timoner blends function and fashion with artistic transitions and drawings, which are featured in the opening credits.

However, towards the end of the film there is too much emphasis on the concert brawls of The Brian Jonestown Massacre. Just about every scene seems to be a recount of yet another fight Newcombe started, making the close-to-finale segment of the film feel drawn out and redundant.

"DIG!" as a whole is an incredibly honest and fascinating look into the world of recording musicians. Dramatic, exciting and amusing, "DIG!" mirrors its own stars impeccably.

"DIG!" (110 minutes) is unrated and contains some drug use and references, language and brief nudity. It is now playing at the Landmark E Street Cinema.