Do you love your body? (Part III)

Editor's Note: Names have been changed to protect the privacy of individual students.

A teen's obsessions with appearance start at an early age. As children grow up, the television they watch, the magazines they read and the images they see all around them influence their ideals of beauty. When they consistently see a positive connotation held for some attributes and a negative connotation associated for others, these ideals become ingrained in them. When they reach adolescence, they feel obligated to look a certain way.

Many teens today acknowledge that body image influences how others perceive them. Mary, a soft-spoken junior, notes that body image plays a big factor in first impressions. "The way they look is the first thing you notice about someone, whether that's conscious or not," Mary states. "I've often found myself judging someone based on how they look. Knowing this affects how I think of my own body and how I perceive myself." Junior Jimmy McMillan expands on Mary's sentiment: "By definition, if people have a perfect body image of what people should look like, there's always a standard that people are going to be placed against."

This notion of an ideal body is broadcast through the media constantly. Junior Brian Morris, however, is one teenager who has not felt many of the pressures of social media. "I don't consume much of the media and it's not that present in my life," Morris notes. However, he admits that "in the little that I see, I see that the choice of actors in movies embody societal standards of beauty."

McMillan also believes that the media plays a major role in spreading standards of beauty. "It's the media's job; in order to have effective media strategy, you have to understand societal body image standards and use those to your advantage to produce attractive products," he says.

Mary has a more optimistic view of the progression of body ideals in media. "Many clothing lines have stopped airbrushing and photo-shopping their models, like Arie." (Arie is a marketed underwear line part of American Eagle Outfitters). "I think it's making people more comfortable with how they look, especially when they see that real models don't have these ideal bodies that they're photo-shopped to look like they have."

Perhaps the media is taking a positive step towards setting more realistic ideals for teenagers compared to the unreasonable ones valued currently. Morris states that "in recent years there's an almost feminine ideal for guys. Guys are expected to dress well and take care of themselves. It's shifted from unreasonable things like height and muscular definition, which is majorly hereditary, to things people can control like clothing choices."

America is becoming more and more aware of the standards of body image that its media, for the most part, perpetuates. Slowly, it's transitioning into a more accepting society. However, there's a strong correlation between teens that expose themselves to the media's conditioning and their opinion of their own body. Mary, who notices the influences all around her, feels that insecurities are part of today's society. "Everyone's insecure about something," Mary says. "There's constant comparison all around you."

Yaelle Goldschlag, a junior, sees body insecurities in her friends constantly, ones that they may not necessarily portray externally. "A lot of people talk about being fat, or being short, or having big thighs. But I know some of my friends who are always saying 'Wow that girl is so skinny' and talking about how jealous they are," Goldschlag says. "I think that at least, out loud, people comment more on other people's bodies rather than their own, but they're probably thinking more about how they look in comparison."

In an acute contrast to what Mary and Goldschlag stated about their friends, Morris, who doesn't expose himself to media as much, does not feel as much insecurity. "I don't consume as much media that's perpetuating these ideals. I haven't been conditioned to care as much," Morris states.

But Mary, Goldschlag and McMillan, along with countless other teens who consume much of the media, do care. They care because the media defines words such as pretty, hot and sexy for them, and they are left to desire and try to emulate them.

Actress Emma Watson reflects on these ideals: "I keep telling myself that I'm a human being…who's not made to look like a doll, and that who I am as a person is more important than whether at that moment I have a nice figure. It makes me sad to hear [people] constantly putting themselves down. We have these unbelievably high expectations of ourselves, when actually we're human beings and our bodies have a function." 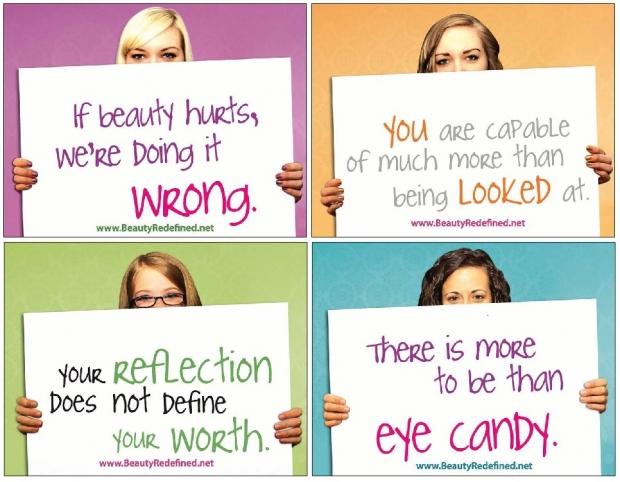 Photo: Body positivity is a new movement that emphasizes loving your body despite external judgments.

Photo: Body positivity is a new movement that emphasizes loving your body despite external judgments.

However, a recent shift in the media is visible, as celebrities have opened up about their own insecurities and their own stresses concerning body image. Pop star Demi Lovato recently admitted to having a severe eating disorder and has admitted herself into a rehabilitation center. Lovato feels that coming to terms with the pressure to have an 'ideal' body has enabled her to love her body. "I've learned to appreciate my body for what it is," she says. "It helps to remind myself how far I've come. I recently saw pictures from my first tour, and I spent that whole summer performing in the heat in a red leather jacket because I was ashamed to show my arms. And that was when I was 105 pounds! This tour, I've had the confidence to show my arms at every single concert."

These celebrities are taking affirmative stances by advocating for body positivity. Body positivity is a new movement that emphasizes loving your body despite external judgments. If successful, this impetus can lead to people feeling comfortable, not only with their bodies, but in their bodies. Nervous high-school girls, like Jessica, can finally look into the mirror and see more than just another flaw to fix. Diffident high-school boys like Jacob won't have to feel those insecurities about their build or their glasses. With all the negative connotations usually applied to the idea of body image here, it's finally a breath of fresh air to see a shard of hope for its future.