The students of Mrs. Gruwell's English class live in the midst of an undeclared war. Every day, gang violence tears apart their families and friendships. The last thing they need is a white woman who thinks she understands them. 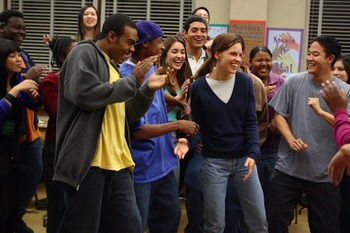 Photo: Hilary Swank yuks it up with her students in "Freedom Writers."

Photo: Hilary Swank yuks it up with her students in "Freedom Writers."

Though "Freedom Writers," based on a true story, squeezes a few streams of tears from audience members, it thrives on racial stereotyping and overuses heartfelt confessional moments. The message is poignant—the film discusses the impact of gang violence and the idea that integration is often undermined by self-segregation—but the film is clichéd and unrealistic.

Though Wilson High School in Long Beach, California, is technically integrated, kids never wander outside of racial boundaries—"Little Cambodia," "The Ghetto," "Wonderbreadland" or "South of the Border." When Erin Gruwell (Hilary Swank) comes to Wilson as a first year English teacher in 1994, she finds her class full of troubled teenagers and an administration still bitter over the open enrollment policy that caused their standardized test scores to plummet.

On the day that marks Erin's abrupt change from meek teacher to intense revolutionary, she discovers a caricature of a black student with oversized lips that another student drew. She confronts her students about their racist behaviors and is met with customary resentment. How could this white woman relate to our situation, their misunderstood teenage minds are thinking.

After the initial friction, Erin has incredible success communicating with her students and following through with the overly ambitious projects their propose. The students read "The Diary of Anne Frank," and as a follow-up assignment, write letters to the woman that sheltered her, who just so happened to be alive and well. The students tell Erin that they not only want to actually send their letters to her, but have her visit their class. To get the money to fly her across the Atlantic, the students put together a wildly successful fundraiser, and then have an apparently random dance party in the classroom. How the students managed to get the tents, cooking supplies and media attention when they can hardly afford books is one of the many mysteries of the film.

Throughout Erin's superhuman efforts to educate her students, she faces stiff resistance from her department head, her husband and her father. But as Erin alienates herself from family and coworkers, she realizes that her students are the people that matter most to her. To teach them acceptance, Erin organizes a weekend field trip to The Beit Hashoah Museum of Tolerance, legal only because it is not during school hours and so doesn't interrupt the testing schedule. Erin's ability to find a way around the school bureaucracy seems to defy the odds; that the story is based on reality is the only thing that keeps the circumstances of the movie credible.

The movie is littered with other situations that seem to be a far cry from reality, including Erin's cringe-worthy displays of whiteness or the students' overly dramatic confessions. In one case, Erin sets up rows of sparkling apple cider and proposes a "Toast for Change." With an eager grin plastered on her face, she asks the class, "Are you ready to get this par-tay goin' on?!" Even before audience members finish rolling their eyes, a student has come forward to make a heart-wrenching toast about the day his family was evicted. "Ms. Gruwell is the only person that made me think of hope," he concludes.

Because Erin's department head, a scathing Imelda Staunton, refuses to let Erin use school resources, Erin must take on two other jobs to pay for books, trips and supplies. In looking for an ally against Campbell's tyrannical decree, Erin finds little solace in coworker Brian Gelford (John Benjamin Hickey). "Stop your cheerleading, Erin," Gelford tells her. "You're ridiculous, and you're not qualified to make judgments about the teachers who have to survive this place." The more resistance Erin faces from her coworkers, though, the stronger her connection grows with her students.

One of the things Erin buys with the money from her other jobs is a composition notebook for everyone in the class. She tells them that they must make an entry each day, expressing whatever is on their mind. Erin sets aside a cabinet for storing the notebooks and explains that if the students want her to read their entries, they should put them inside at the end of the day.

A couple evenings later, Erin receives no visitors to the school's Parents' Night, but finds the cabinet full of notebooks. Each student reflects all too articulately on the violence they have witnessed or writes about a painful memory.

Many of the actors, though, weren't pretending. Of the array of young actors in "Freedom Writers," many were chosen during a talent search among high schools in poor Los Angeles neighborhoods, according to a recent New York Times article entitled "Hard Epilogue to 'Freedom Writers': A Violent Death." The same article reported that one of the actors from the film, Armand Jones, was actually killed in a shooting connected to gang activity. The real Erin Gruwell said that Jones's death made the message of the film even more relevant and painful. "It shows us that the story is not over," she said in the article. "There's still gang violence, there's still murder, there's still intolerance."

Marie Mencher. Marie is anxiously thrilled to be on the Silver Chips staff. She is having a sleeplessly great time covering stories with actual relevance, but nonetheless would like a little more time to do the other things she loves, like being assistant drum major of the … More »