Emma Watson, who was named the U.N. Women Goodwill Ambassador earlier this year, formally invited men to join the fight for gender equality at the launching of the #HeForShe campaign on Sept. 21. Watson's speech was impassioned and direct, addressing and tackling common misconceptions about gender equality. Watson spoke about the fallacies she observed in the connotation of the term 'feminism,' and condemned them. Watson asserted that "the more I have spoken about feminism the more I have realized that [it]…has too often become synonymous with man-hating. If there's one thing I know for certain, it is that this has to stop." Many contemporary gender equality movements are perceived as attacking men, treating them as rivals. Watson's point of view is progressive and pragmatic. Men encompass more than half of the world's population, and should take a stronger stance in the push for gender equality. 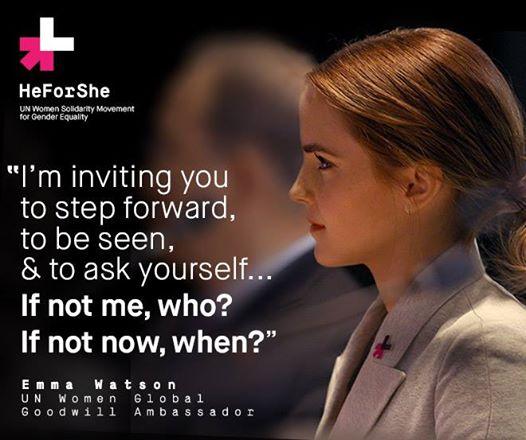 In her speech, Watson urged towards all men and boys to join the cause for gender equality: "Gender equality is your issue too," Watson stressed. Watson instantiated that by removing the stereotypes imprisoning men, societal stereotypes for women will change as a result. She emphasized that "We don't often talk about men being imprisoned by gender stereotypes, but…[they are, and once] they are free, things will change for women as a natural cause." This idea is the backbone behind the HeForShecampaign. The campaign will encourage men to be at the center of activism to end the persistent inequalities faced by women around the world. The campaign is multi-faceted, and combats social, economic and political inequalities faced by women by starting at the root of the problem: misogynistic societal ideals.

The campaign has now amassed a following of over 130,000 men and boys who have pledged to take action against gender discrimination. The pledge they took stated that "gender equality is not only a women's issue, it is a human rights issue that requires my participation. I commit to take action against all forms of violence and discrimination faced by women and girls." It is critical that men everywhere are aware of the gravity of gender inequality. This pledge is the first step towards integrating them in the fight against discrimination. However, a pledge alone is not enough. Actions speak louder than words. And along with a change in perception, there needs to be a movement towards implementing these ideals in society.

Watson also stated that the universal application of the campaign is that it's for everyone. "If we start defining us by what we're not and start defining us by what we are-we can be freer and that's what HeForShe is about. It's about freedom," said Watson. This statement is very powerful and pervasive, because it's showing that the campaign is not an attack on a certain gender not doing enough for the other, but instead an idea that we can come together and find freedom for all of us.

Watson received a standing ovation for her speech, as well as support from fans and Hollywood friends. Celebrities including Logan Lerman, Douglass Booth, Simon Pegg and Tom Hiddleston tweeted pictures of themselves holding cardboard or paper signs with the hashtag #HeForShe in support of Watson.

However, support is not the only thing the actress has received. The day after her speech, the website, 4chan targeted Watson with sexual threats such as leaking her nudes. What is even more sickening is the glee with which this threat was met by Reddit users, who hoped that in light of the threats, Watson would end her feminist campaigning. However, the threats turned out to be a hoax by Rantic Marketing in an attempt to shut down the website. Their actions only emphasize the need for gender equality and the need to stop perpetuating sexist ideals. Such ideals perpetuate the objectifying of a woman's body and the use of a woman's sexuality to discredit her.

Whether Watson's nudes are leaked is irrelevant at this point. Her campaign is powerful and pervasive and will (hopefully) accelerate the arrival of gender equality.