Excitement and obstacles in portable rollout

At the far end of Blair, past the SAC doors and the student courtyard, sit four brand new portables, a mass of beige and wood lazing in the afternoon sun. The portables, a result of Blair's expanding student population, are a new addition meant to help with the increasing Blazer population.

The new Blair building, which first opened for the 1998-1999 school year, was meant to hold only 2820 students, but currently holds about 3100 students and 307 staff members. According to Blair principal Renay Johnson, Blair's student population will continue to increase each year. "I've been told that every year we get 200 more students until we get up to 3600 students, and then it may stabilize a little bit," she says.

After Blair reached its capacity last year, MCPS assigned four new portables to Blair that would help alleviate the classroom shortage. "We got brand new portables; sometimes the county refurbishes them from different schools, but these were brand new, constructed on site and they put decking in the front," Johnson explains.

The recent increase in high school students is a result of an influx of students from elementary and middle schools nine years ago. Student enrollment has gone from 2900 students to 3100 students, and is expected to reach 3300 students by the 2018-19 school year. To help with the second wave of new students, Blair will receive four more portables next year.

In order to address the growing number of enrolled students, Blair has met with architects and has plans to be renovated and receive additions sometime in the near future. "We had a meeting last April with architects, and they showed us some plans of what it would look like to expand Blair so it would be 3600 students without portable classrooms, and it looked pretty amazing," Johnson says. 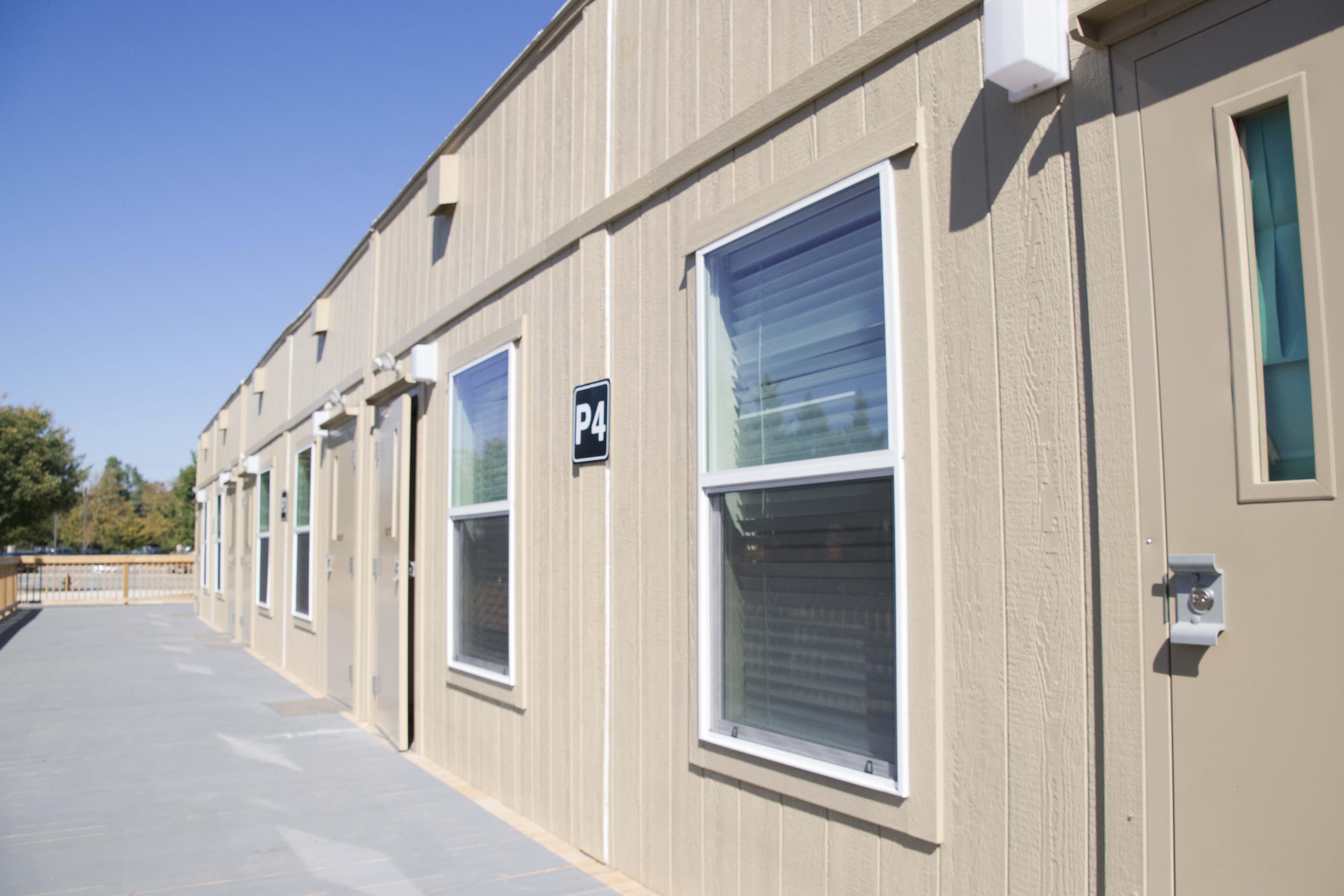 Another solution to Blair's increasing population has been to cut the sibling link program in the lottery system. Previously, if a student's sibling was in one of the magnet programs, that student would also get into Blair to make it easier on the family. Now, Blair needs as much space as possible, and no longer guarantees that a student will be accepted at Blair because their sibling is in an application program. "It's not automatically guaranteed, if your child is in an application program, it doesn't mean they can come to Blair. You can indicate that there's a sibling, but it may not be honored, which is hard on families," Johnson clarifies.

Despite a small mishap on the first day of school where a leak around the window of portable four which resulted in a temporary evacuation, the move to the outdoor classrooms has been relatively smooth sailing for the teachers.

Michael Zick, a social studies teacher who volunteered to move his classes outside and now teaches in portable two, is actually excited by the prospect of teaching in his portable. "I don't mind being out there at all. I'm generally pretty positive about it, we have control over our own air in there, that's pretty nice... It's kind of fun, now that the kids are used to the routine of how long it takes them to get out there, it's a cool little space," Zick explains.

The time it takes for students to get to the portables has definitely been an adjustment for teachers such as math teacher John Giles who teaches in portable four during periods one, three, seven, eight and nine. He finds that a lot of his students show up late to ninth period because the shortened passing period leaves little time for students to get all the way out to the parking lot on time, sometimes from the complete opposite end of the school. "It's a hike to get here so unless they're like lined up at the door ready to bolt the second the bell rings it is kind of hard for them to get here in five minutes, so they are kind of routinely late," Giles says.

Rahman Culver, who teaches Modern World History, had a different challenge to get accustomed to. He, unlike Zick and Giles, teaches most of his classes inside the buildings, rather, he teaches most of his classes inside the Blair school building and only one outside in portable two. "I generally teach in room 144, however, lucky for me, I have 6th period off right before I have to go out to the portable so there is time for me to get my things together," he explains.

The transition was made easier for Culver because the portables are prepared with materials to make sure he doesn't have too much to carry back and forth from the school.

"There is a chromebook cart that's fully stocked out there, there's a nice new promethean board that's fully functional, we get to control the air and heating ourselves, so I have pretty much everything I need in that space," Culver says.

Photo: The four portables are located in the parking lot, brought to Blair to help deal with the student overflow.

Photo: The four portables are located in the parking lot, brought to Blair to help deal with the student overflow.

Overall, despite some adjustments that had to be made, most of the teachers found the transition to the portables fairly painless, and now, only a couple weeks in, they are already completely comfortable in the new learning environment.

"At the end of the day," Zick says, "If the room you're in really changes how much I can teach or a kid can learn, then I'm not doing something right as the teacher. I should be able to teach anywhere."

The challenges that Blair security and maintenance teams face with the addition of the portables are more technical, such as figuring out how an already overworked custodial staff can cover more area and how to get students in and out of the building during class to go to the bathroom because there are no bathrooms out in the portables.

For the first couple weeks of school, the security assistant stationed in the 160s hallway had the added responsibility of opening the doors for students who were coming from the portables to go to the bathroom.

"Two doors were unlocked at the SAC and security would sit in the hallway at the end of the 160's near the SAC and monitor the movement and check passes for students coming in from the portables," Security Team Leader, Darryl Cooper, explains.

However, now a new system is in place where each portable will have key cards that allow students to unlock the SAC doors to go to the bathroom meaning that the SAC doors no longer have to remain unlocked all day.

"Each teacher that's in the portables will have two key cards they'll issue as passes with the pass so the students have to use that to get into the building," Cooper says.

Building services, a staff comprised of only 19 people for the entirety of Blair, was asked to cover the new portables as well as the entire school building and campus without the addition of any new staff. To maintain a school the size of Blair is already a lot, but anything outside of the building is added to the workload, which now includes the portables.

Before the portables arrived, Blair business manager James Funk had put in a request for additional building services staff. Even with the impending addition of four more portables, building services will have to take on the extra workload. "The county says that we're going to use the staff we have to maintain the portables. This is not the end, they're going to add more [portables] next year, and that'll make it even more work," Yakubu says.

The newly constructed portables bring to light more problems, from a stretched thin building services staff to an ever growing Blazer population that does not quite fit within school walls, but has also gained support from teachers. The benefits of a singular classroom inside a small building far outweigh the drawbacks of the portables to these teachers, but emphasize how little space there is left inside of Blair and how drastic measures must be taken in order to accommodate the entirety of the current and rising Blazer population.