In a country where gridiron greatness reigns in the sports market, fantasy football gives its users an outlet to live their pigskin fantasies. A game in which the fantasy owners' success is determined by weekly statistical performance of specific NFL players, the popular fantasy sport is a yearly venue of obsession for football fans everywhere.

The game has taken over the lives of millions of bored cubicle workers by storm. In fact, according to the Fantasy Sports Trade Association (FSTA), more than 27 million people participate in the fantasy sport, which generates an annual revenue from $800 million to $1 billion. 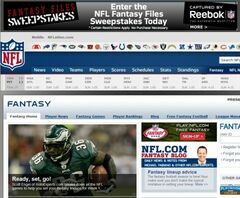 Photo: Fantasy football lures millions of fans every year to participate in the booming business. Photo courtesy of the National Football League.

Photo: Fantasy football lures millions of fans every year to participate in the booming business. Photo courtesy of the National Football League.

The increased usability and accessibility of fantasy football due to advanced technologies only helps the popularity of the hobby. Today's cellular devices carry the ability to access real-time NFL statistics, allowing fans to follow the league from the convenience of their phones. Smart phones such as the Apple iPhone offer streaming video clips of games and have available applications specifically for playing fantasy football. Social networking sites are now also in the mix. Facebook recently added its own fantasy football application, which already has 350,000 users, making it one of the more popular host sites.

Even educators have joined in on the fantasy football bandwagon. Realizing the mathematical value of the fantasy sport in terms of understanding statistics, a handful of schools across the nation have taken advantage of the educational potential of the game. Foothill High School in San Jose, California, a school plagued with low academic performance, integrated fantasy football into its curriculum, only to see surprising success. Another school with an underachieving mathematics program, Woodbine Elementary school in Southern New Jersey, turned to fantasy football to boost the students' interest and performance through the game. The same year, the mathematics proficiency level of the eighth graders rose from 9.9 percent to 54.1 percent.

Nonetheless, the game comes with its downsides. Businesses across the nation suffer as a result of the game's appeal to millions of office workers looking for ways to spend their time other than by working. Employees spend around 10 minutes managing their fantasy teams and around 34 minutes thinking about their teams daily, according to a 2006 study by Challenger, Gray & Christmas, Inc., outplacement consultants based in Chicago. This leads to an approximated $1.1 billion yearly lost from cuts in productivity due to fantasy football.

With the added popularity boost from technology and its integration in education, fantasy football is on a steady rise on the 'things to do' list for fans everywhere. Despite the tendency for some fantasy players to get a bit loose with their spending for their teams, fantasy football never really hurt anyone. It's a smart, fun way of complimenting the NFL and keeping track of all the gridiron action. Let's just hope playing fantasy football doesn't get in the way of actual physical activity.