Undocumented immigrants may be at risk

Takoma Park's sanctuary laws protecting the identities of undocumented criminals from the federal government will be overridden by a new federal policy, Safe Communities, which allows the Immigrations and Customs Enforcement (ICE) agency to gather data on undocumented immigrants from municipal police records.

An exact date for the implementation of Secure Communities has not yet been decided, but will occur early next year, said Montgomery County spokesperson Patrick Lacefield. 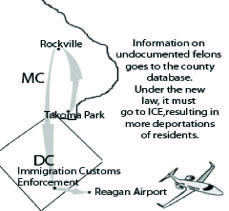 Photo:
When Secure Communities is implemented, ICE will have an easier time locating and deporting undocumented immigrants in Takoma Park, according to Lacefield. "Secure Communities would supersede our [current] policy by basically giving federal ICE access to all county arrest records, giving them the freedom to find undocumented criminals,” he said.

The law will also require Montgomery County law enforcement to report all information, including the residency statuses of criminals, to the ICE, according to Maryland state senator Jamie Raskin (D-20). "Under the federal Secure Communities policy, Montgomery County will be turning over information about immigration relating to anyone who comes into their custody, so if someone commits a crime in Takoma Park that lands them in jail in Rockville, their immigration status will be communicated to the Feds,” he said. If an undocumented person is discovered by the ICE, he or she will be deported, said Lacefield.

According to Lacefield, the ICE plans to enforce Secure Communities despite resistance from Montgomery County. "The idea was introduced last year, but the argument we made was that enforcing federal immigration law is not the job of the local police; it's the job of the federal government. But next year sometime, they are going to have more control,” he said.

Ricucci explained that the city will maintain its current practices for as long as possible. "We're a municipality, so we answer to the Takoma Park government. We'll continue to do what we've done before, because the Takoma Park sanctuary status goes back several decades,” he said.

Raskin felt that the proposed law was driven in part by public opinion. "There is a blatant sort of anxiety across the country about the immigration problem,” he said. "My understanding is that the Secure Communities program is a part of the move to crack down on undocumented immigrants.”

Freshman Guillermo Schwarz Lopez and senior Andrea Canales voiced their concerns that Secure Communities will have a negative impact on the Montgomery County community. "People come here to get better lives, not to get deported,” said Schwarz Lopez. Canales agreed, stressing that most immigrants aim for improved quality of life. "That's not fair. Most people are going away to start anew, and they shouldn't be bringing up their past,” she said.