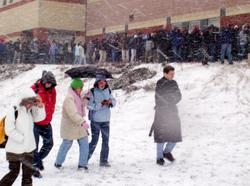 A fire alarm sounded at approximately 11:35 am Wednesday, Jan. 19 during the sixth period exam, resulting in the fourth unplanned evacuation this year. Students were given an additional 30 minutes to complete their exams.

The alarm in portable 5 was pulled, according to Building Service Manager Quentin Middleton. "It was one of your fellow students trying to get out of exams,” he alleged.

At the time, it was snowing outside Blair, and according to The Weather Channel, approximately 20 degrees. The wind chill was 3 degrees, and a snow advisory had been issued for the Silver Spring area until 4:30 pm.

Seema Kacker. Seema is a senior in the magnet this year, and is thrilled to be a part of the Online senior staff. She also plays tennis. More »