"Fired Up" goes down in flames

"Two guys. 300 girls. You know what happens." That's the sad premise of director Will Gluck's "Fired Up," a teen comedy that tries too hard to be another "Wedding Crashers." Whereas "Wedding Crashers" was actually funny, "Fired Up" only offers lame jokes and clichés - already seen, already done. 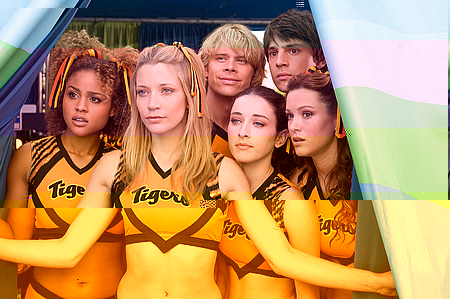 Nick Brady (Eric Christian Olsen) and Shawn (Nicholas D'Agosto) are two football players at Gerald R. Ford High School, who have only one thing on their minds other than football: girls. So it's no surprise that when the womanizers find out about Fired Up, a summer cheerleading competition, they snake their way onto their school's cheer team in hopes of hooking up with a plethora of new girls over the summer.

Unlike "Wedding Crashers," "Fired Up" has a plot racked with too much predictability and too many recycled storylines. After staying at the camp, the boys unrealistically transform from players to sensitive men. Shawn even falls madly in love with the Tigers' captain Carly (Sarah Roemer), the only girl immune to his charms because of her wit and personality rather than her usability. Clichés galore - it's obvious what will become of their relationship in the end.

With "Fired Up," it is difficult to say which is worse - the trite plot or the hopelessly corny jokes. The attempts at humor go downhill throughout the film, as they are repeated en mass. When the overly enthusiastic Coach Keith (John Michael Higgins) hears the words, "The Fountain of Troy," the most dangerous cheer move, he goes berserk. After the joke is mentioned over three times, the coach's craziness - funny at first - loses steam quickly. Other gags during the course of the movie are also plagued by repetition, especially the constant references to the summer camp's abbreviated name, "FU."

Despite unpromising wit, rare slivers of comedic hope are hidden in "Fired Up." The Nick-Shawn pair can't be beat when Coach Keith forces the boys to practice their cheer routine at night, even though they are buck-naked. Hope is also introduced in the forms of the entertaining Brewster (Adhir Kalyan), Nick and Shawn's gay roommate at cheer camp and Poppy (Juliette Goglia), Shawn's little sister. Overly flamboyant, Brewster brings vivacity to the otherwise drab movie by being a neat freak and a dramatic worrywart. Poppy, in contrast, is bitingly sarcastic and humorous in her brutal honesty and desperate efforts to get Shawn's money.

Although Kalyan and Goglia provide laughs, the overall acting in "Fired Up" doesn't give audiences much to cheer about. Kalyan and Goglia both have minor roles in "Fired Up" and are ironically are the strongest actors in the film. They portray their highly idiosyncratic characters spiritedly, providing fun even when stars D'Agosto and Olsen lose their shine. Although both are mediocre actors, D'Agosto and Olsen still come in with a tied second for their performances, as they convey a sense of camaraderie and loyalty that almost touches the heart. Although the two lack the emotion and maturity of Owen Wilson and Vince Vaughn, their onscreen chemistry - when they share rare moments of hilarity and sensitivity - reaffirms that one day, they might become the next wedding crashers.

With not much humor, acting or plot, "Fired Up" is another typical and meaningless high school movie. The stale storyline lacks the cleverness or cattiness of fellow cheerleading movie "Bring It On," and lacks the over-the-top humor of "American Pie." Even though "Fired Up" is somewhat fun, it cannot equal any of the movies it tries to be. Instead of soaring, the film falls flat on its face and burns out.

"Fired Up" (90 minutes) is rated PG-13 for crude and sexual content throughout, partial nudity, language and some teen partying. Now playing in theaters everywhere.