Local haunts that really do go bump in the night

One of the ongoing perks of living just outside the nation's capital is being constantly surrounded by a range of historical landmarks. But, in the spirit of Halloween and all things ghoulish and ghastly, "historical" has become synonymous with "haunted." Although hard to distinguish amid the modern roads and power lines today, old communities such a Rockville, Sandy Spring and Silver Spring boast some of the most dated and most notoriously haunted places in the area. According to Shannon O'Rourke of the Montgomery County Historical Society (MCHS), "everything around here's supposed to be haunted."

Haunted houses even the Addams' would envy 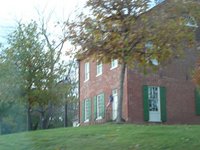 The Beall-Dawson House, a museum currently maintainted by the MCHS, once housed the Bealls, a wealthy Montgomery County Family. A modest brick house, the Beall-Dawson House has reported only supernatural happenings of a friendly nature. According to the MCHS's 1988 publication, "Ghost Stories of Montgomery County," odd goings-ons mostly consisted of inexplicable bumps in the house's upper levels or burglar alarm triggers responded to by local police, only to yield no evidence of a break-in. But, volunteers, who are often in and out of the house, have also reported strange occurrences. Rae Koch was dipping candles in the home's kitchen when she noticed movement out of the corner of her eye. Observing more closely, she saw a black man laying bricks at the floor of the carriage entrance, dressed in 18th century style clothing.

Another legend circulating about the Beall-Dawson house centers on a doll house given to a young girl on her second birthday. After her untimely death a few years later, the doll house was taken out every year in her memory. Strangely, the furniture in the house would always be in a different room, scaring the bejeezus out the Society members. After selling the doll house's furniture, volunteers have reported wailing sounds around the empty doll house.

For more information on both of these historical houses, consult the Montgomery County Historical Society at their web site.

Not every city can claim the bragging rights of being home to the scariest movie ever made. The site of the 1973 film "The Exorcist," where the true story the film is supposedly based on, is now a popular attraction for tourists and natives alike. Although no specific hauntings have been reported, the eerily steep 97 steps at the end of M Street are enough to give anyone the goose bumps.

A legend alluring enough to catch the fancy of three young filmmakers, the legend of the Blair Witch was brought to national attention through the film "The Blair Witch Project," a compilation of recovered film that had been shot by the three teens. The legend began in 1785, when a group of children accused Elly Kedward of luring them into her home and trying to draw their blood. Kedward was found guilty of witchcraft, banished from the village and presumed dead after a harsh winter. For the next hundred years, the Burkittsville area experienced several unexplainable disappearances of children, further perpetuating the Blair Witch legend. Seeing as the legend and the film are studio fabrications, no real supernatural incidences have been reported, but the studio definitely deserves commendation for its effort that continues to haunt in rentals and syndication.

Vacations gone awry
Because of the proximity to Washington, D.C., many old buildings had their starts as hotels, and then were later purchased for other exploits. 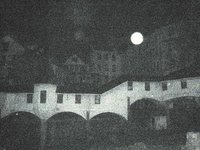 Originally built in 1877 as the Forest Glen Inn, the National Park Seminary was supposed to be the reality of the developers' dream of turning the area into a resort hotel for Washingtonians during the muggy summer months. Unfortunately, they never realized their dreams, and after another failed business venture of turning the property into a casino, it was finally sold to John and Vesta Cassedy, who had dreams of opening a girls' finishing school. The National Park Seminary opened on Sept. 27, 1894 with 48 students and eventually became the premier finishing school for upper-class girls. Aimed at expanding the horizons of these young girls, the Cassedys built various exotic structures including a castle, a pagoda, an Italian villa, along with a smattering of sorority houses.

Following the Depression years which took enrollment to a low of only 30 students, the school's new president, Roy Tasco Davis, recognized that the school would not survive as a social training ground for the wealthy and changed the school's focus to more practical skills, and the school's name to the National Park College to reflect this. During WWII, the Army invoked the War Powers Act and used the property as a convalescence center for wounded and shell-shocked soldiers, and was also a treatment area psychological patients. The eclectic property is now suffering from a serious case of neglect, and supernatural reports include flickering lights and the persistent sound of girls' chatter and a bouncing ball.

For more information on the Seminary's history and plans for its future, visit their web site. 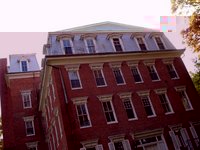 Opened in 1886 as a suburban resort hotel, Chestnut Lodge was later opened as a sanitarium in 1910 by Dr. Ernest Bullard. Dedicated to the "care and treatment of nervous and mental diseases," Chestnut Lodge became internationally renowned as a pioneer in developing intensive treatments for serious mental illnesses. Notorious for experimentation in psychiatric treatments not limited to electro-shock therapy and receiving the subjects of CIA LSD experimentation, Chestnut Lodge was the destination for the most mentally destitute "patients beyond all hope." The sanitarium remained open until 2001, and has since been abandoned. Looking almost like a snapshot out of the Silence of the Lambs, neighbors have reported screams and unusual activity within the building since its closing.

Note: Silver Chips Online does not condone trespassing, and recommends taking precautions for those set in investigating the supernatural.