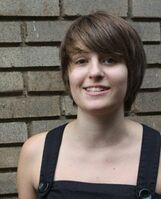 Photo: Class of 2013 President Irene Ravitz hopes to achieve the goals of the freshmen class. Picture courtesy of Irene Ravitz.

Photo: Class of 2013 President Irene Ravitz hopes to achieve the goals of the freshmen class. Picture courtesy of Irene Ravitz.

Ravitz was thrilled to be elected freshman class president and considers the position a way to connect with the school community. "This is a great opportunity, since I used to go to a private school where there was no class president," she said. "It just seems like a fun experience in a big school, and a way to get to know people and help them out."

She attributed her win to an honest speech delivered in the auditorium during first block on Tuesday, when all freshman candidates had the opportunity to speak to the class of 2013. "I don't judge people by appearance, sexual preference or religion," she said in her speech on Tuesday.

Ma displayed similar enthusiasm for his new role as freshman vice president. He indicated his willingness to cooperate with Ravitz and participate in the Student Government Association (SGA) to better represent the freshmen. "I want to sit down with Irene and go to SGA meetings," Ma said. "I will support the freshmen and do my best to achieve their goals."

SGA Parliamentarian and senior Lauren Krohmer, who is in charge of all Blair elections, conveyed the value of freshmen officers in SGA. "It's a way to get freshmen more involved and to organize events to bring them together," she said. The elected officers are in charge of communicating the needs of the freshmen class to the SGA and planning class fundraising opportunities, according to Krohmer.

Unlike last year's all-male freshmen officers, Ma was the only male elected for the class of 2013 and the only male on the ballot, according to Krohmer. "It's good to see that a boy was elected as both genders are represented," she said. "SGA is always looking for diversity in representation."

Potential candidates began the electoral process in early September. These students were required to produce a petition with 30 of their peers' signatures, as well as the signatures of Principal Darryl Williams, a ninth grade counselor and a teacher of their choice. Potential candidates were also expected to attend a meeting on campaign rules, according to Krohmer.