Getting down and dirty

Secluded in its own little niche just off of the 210s hallway, it's unlikely that many Blazers have ever actually been inside the greenhouse. But for those who yearn to roll up their sleeves and get dirty or to discover the green thumb they never knew they had, this small, glass-paneled classroom is a haven.

Throughout their four years at Blair, students have a few opportunities to explore the greenhouse. AP Biology classes use it for some projects and it can also be used, with permission from horticulture teacher Elizabeth Levien, for independent projects. The key to really getting to know the greenhouse, however, is taking horticulture or becoming a member of the green club. 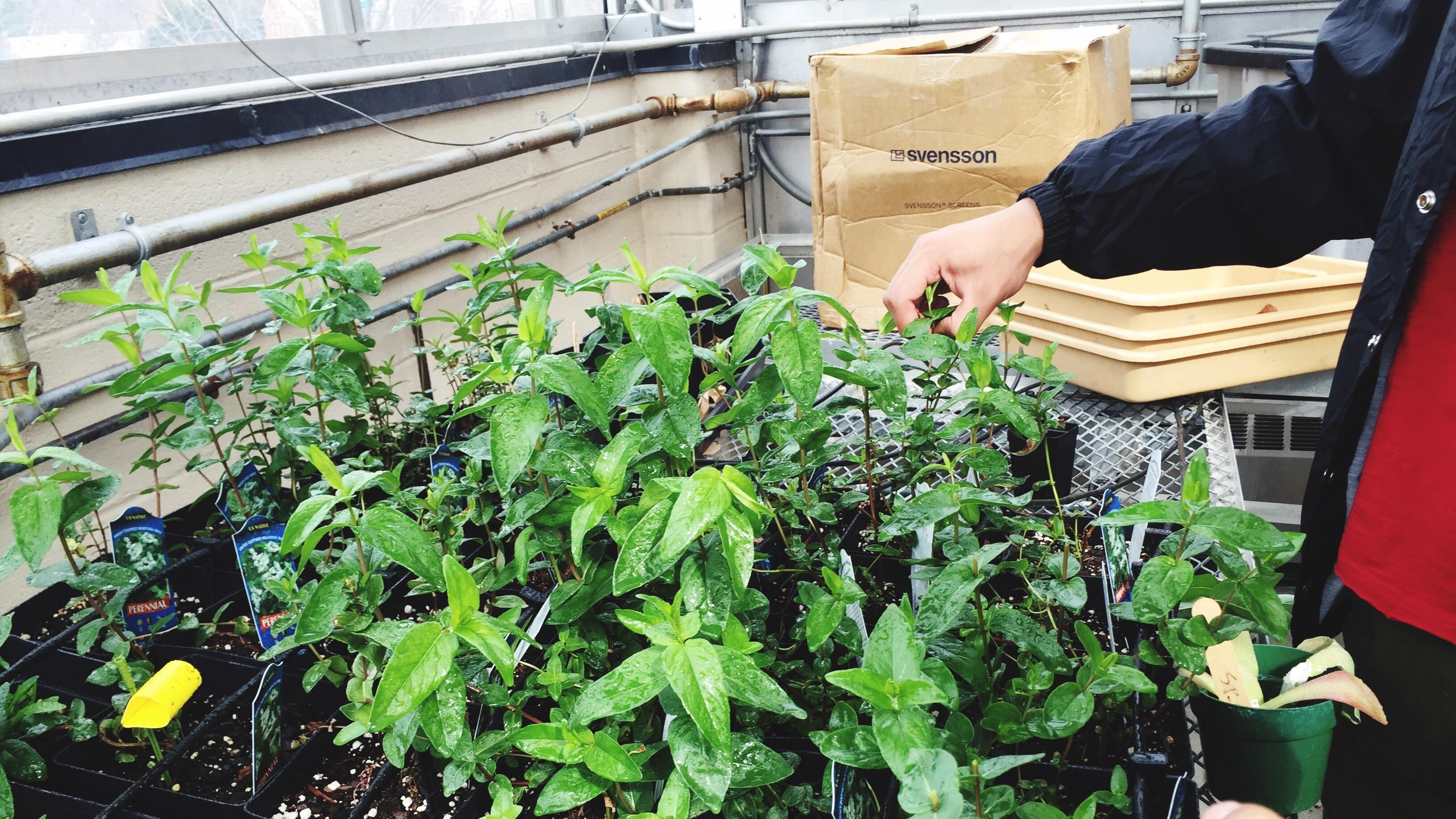 Photo: Students can explore the world of horticulture in the greenhouse.

Photo: Students can explore the world of horticulture in the greenhouse. Photo courtesy of Leah Phillips.

Passionate about gardening, Levien wants students to see growing plants not as a job, but as a lifelong hobby. "There're so many benefits to growing as a hobby," she says. Working in the greenhouse can provide interested Blazers with lifelong skills applicable beyond the greenhouse, such as making healthy decisions about food. "There are a lot of relevant messages that get picked up in addition to the horticulture skills," Levien explains.

Senior horticulture student Isaac Bonilla agrees that gardening helps hone a variety of skills. "I learn organizational skills, such as helping to figure out where things should go and how to have things look nice, but also having the garden be sensible and organized," he says.

The greenhouse, however, isn't just full of flowers and leafy greens. Horticulture students have the opportunity to grow just about any plant they want, as long as they can find the seeds in one of Levien's many catalogues. For Levien, it's important that her students be invested in what they're doing. "I feel strongly that if kids have ownership of what we're growing and they're more interested then they'll take it more seriously," she says. Students this year are endeavoring to grow onions and all manner of flowers. "We've started growing some onions, which is really fun. We also are about to start growing a whole bunch of different flowers like roses and lilies, and we're planning on having topiaries," Bonilla says.

For junior horticulture student Jordan McDougall, as well, growing plants is more than just classwork. "It's nice to watch your plant grow and thrive, it's like your little baby," McDougall says with a smile.

Horticulture, however, isn't just about growing plants. Students also learn how to cook with what they grow and make healthy eating choices. "The idea is that you're not eating processed foods. You're taking ownership of the food that you're putting in your body so you know where it comes from," Levien says. For Bonilla, taking the class has expanded his knowledge of nutrition. "There's maybe a few weeks in class we spend talking about how we get certain nutrients from certain plants, and how we can help grow those plants to make our diets better," he explains. The first semester exam is to create a cookbook that uses every part of a plant. According to McDougall, the class has cooked and eaten what they've grown in foods like cookies, pesto pasta and salad.

Taking horticulture can also be an opportunity to relax from the stress of more traditionally structured classes, while still learning. Students taking horticulture can go outside or go to the greenhouse to do their work, instead of being pent up inside all day. "It feels healthy. It's like taking a break from all that AP ugliness," explains McDougall.

Levien is passionate about the subject she teaches, which is part of what keeps the students so engaged. "I love getting to see kids get over the ick factor. I feel like we evolve to get dirty and the more science learns, the more we know how important the microbiome is," she says.

Blazers are now growing herbs, succulents (which are "fleshy" plants like aloe), veggies and soon, flowers in the greenhouse. And students who work in the greenhouse might even be able to take some plants home. "If they're interested and they're going to take care of the plant I'm open to them taking stuff home," Levien surmises.

Regardless of whether they want to learn more about plants, eat food they grow themselves or just be able to go outside, taking horticulture is a great way for Blazers to get involved with the greenhouse. So take a risk and take the class. The worst that can come of it is a few dirty fingernails.