Blair sneaks past Churchill in overtime, 1-0

Blair's varsity girls' soccer team (14-1) battled through high winds and near-freezing temperatures to beat Winston Churchill (6-6-1) 1-0 in overtime, advancing to the regional semi-finals. The Lady Blazers, coming off a bye, dominated the entire game but were unable to find the net in regulation. Blair finally broke the tie on a sudden death goal when senior captain Annie Worden poked in a bouncing ball through a crowd of Bulldogs late into overtime. 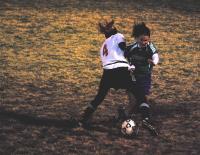 A big factor in the game was the gusting wind and frigid temperature. Head coach Robert Gibb said that the wind made the Blazers' favored style of play difficult. "The wind negates skill and made it really difficult to play our game," Gibb said. "When we got to overtime, I was like, 'Yeah, just what I want on a freezing night.'" The National Weather Service reported the temperature to be around 36 degrees Fahrenheit and the wind to be blowing west at 26 miles per hour with gusts up to 46 mph. Worden stressed the impact of the wind on the game. "It was like the wind was an extra player," Worden said. "It was an odd game, but a great win."

Senior captain Anna Rassman commended her team for the victory. "We played with a lot of heart," Rassman said. "Plus, running against the wind is so exhausting." The win sends Blair into the third round of the playoffs where they will defend their home turf once again on Thursday, against Quince Orchard.

The first half was scoreless as the Blazers and the Bulldogs engaged in a tight struggle for ball control. Blair defense was able to keep the ball on the sides and made sure that Churchill did not often get within scoring range. Nonetheless, the Lady Blazer's offense did not pick up momentum until the second half, when they were playing with the wind.

Although Blair stayed on the attack and kept the ball downfield, the team was unable to put a shot past the Churchill defense. Gibb noted that during the second half, Churchill increased personnel on defense and kept the extra people deep into their own territory. "[The defense] wouldn't come out," Gibb said. "The girls kept on having to get through what seemed like ten defenders."

At the start of overtime, Gibb stressed the importance of winning the coin toss in a game easily affected by wind direction. "Whoever won the coin toss would ultimately have the advantage," Gibb said. However, Churchill won the coin toss for the start of the ten-minute overtime period and chose to play with the wind at their backs, forcing Blair to play against the elements. But Blair started strong, keeping the ball downfield and attacking at the Churchill offense. Finally, with less than two minutes left in overtime, Worden scored off of a cross from Rassman.

The Lady Blazer's regional semi-final match is at home on Thursday, Oct. 30 at 7 p.m. against Quince Orchard.