The first 20 minutes of the game featured back and forth possession changes, with the Blair back line holding strong and the midfield creating chances to score - one of which featured captain Kelly Mayo streaking down the sidelines to send a cross into the box and another off of quick passing between Mayo and junior captain Joelle Nwulu.

B-CC scored off of a screamer from 30 yards out that just flew over goalkeeper Madeline Burke's fingertips. Despite this setback, the game was still close, as midfielder Amanda Feinberg retaliated with a shot on goal off of a corner that was scooped up by the B-CC goalkeeper. Key saves by Burke kept Blair in the game to close out the half down only 1-0 against one of the best teams, if not the best team, in the county. 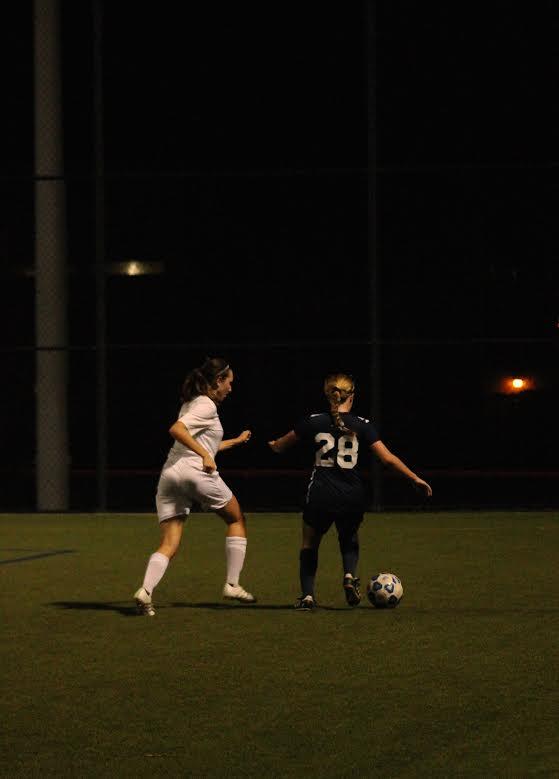 The Blazers started off the second half the way they did the first half. Possession traded back and forth until the 60th minute, when the Blazers had several defensive lapses. The Blazers made their way deep into Barons territory when they lost the ball and the Barons lost a quick counterattack which led to a breakaway goal.

The Blazer defense had trouble working together in those ten minutes. "The defense wasn't shifting and so when they flooded in, we were leaving a bunch of them uncovered with holes in our defense," said junior defender Kinjal Ruecker. "We really just messed up in terms of communication.”

The Blazers kept fighting after the goals, however. Instead of just resigning themselves to a loss, they pressured the Barons intensely, which paid off in the 81st minute when freshman Sneha Ojha lobbed a shot just over the outstretched fingers of B-CC's goalie from 30 yards out.

The Blazers didn't let up. Four minutes later were awarded a free kick from just outside the box in the 85th minute, which Nwulu curled over the wall to make the score 4-2. The offensive surge came too late to do much more than make a dent in the goal deficit.

Though they lost, the Blazers stayed with a very good team and were upbeat after the game. "As much as I hate to use the term, this was a moral victory for us," Coach Robert Gibb said. Nwulu agreed with him. "I'm very proud of my team and how hard we worked," she said. "It was a really good effort on everybody's part, but we need to work on playing with these better teams."

The Blazers face the one team B-CC lost to, the Whitman Vikings, next, but Nwulu is hopeful. "We are definitely going up and we just need to continue doing so," she said.

The Girls' soccer team takes on Whitman next Monday at Blair