Girls' tennis kicked off its 2007 campaign with an easy win, defeating Einstein 7-0 in the season opener. Though some Blazers were still adjusting to their new positions after a reordering by coach David Ngbea, straightforward shots and basic skills were sufficient against the Division III Einstein team. Singles players were especially dominant, dropping a total of only four games. 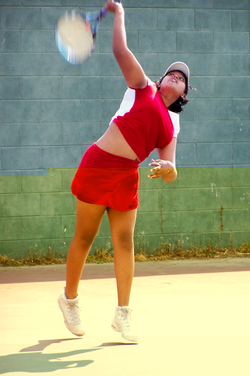 "I didn't do anything special," she said. Kannan would often hit strong volleys and wait for Lukacs to hit into the net or hit out of bounds. In addition, Kannan turned many of her services into service winners by exploiting Lukacs's inconsistency.

Freshman Shilpa Kannan at second singles was triumphant as well, winning the first set 6-1 in 25 minutes and finishing the game with a 6-1 win, while senior co-captains Bonnie Ding, at third singles, and Priyanka Gokhale, at fourth singles, won their games 6-0, 6-1 and 6-1, 6-0 respectively. At third doubles, senior co-captain Amy Li and freshman Ann Choi were the last to finish but won as well, 6-3, 6-1.

Blazers had similar experiences across the board with Einstein players. At first doubles, senior co-captain Jasleen Salwan and sophomore Deepa Chellappa won both sets 6-0 by making simple shots and then waiting for their opponents to falter. At second doubles, sophomores Elissa Shiau and Tiffany Chang won 6-1, 6-2.

As this was their first game of the season, both teams had to play against their nerves as well as their opponents. "People were kind of jittery and scared," coach Ngbea said. In addition, doubles players had to adapt to their new partners. Despite these challenges, Blazers "were consistent," according to Einstein coach Kelly Hale.

Despite the easy Blair victory, Ngbea was adamant that the team still has a lot to work on. "They were not moving and were very static," he said. Ngbea identified volleys and being more aggressive as areas of improvement as well.

The girls' tennis team plays their next home game on Monday, Sept. 10 against Walter Johnson at 3:30 p.m.