Girls varsity soccer dominates in Battle of the Boulevard

In a high scoring game against Northwood, the Blazers (3-2-0) won their first divisional matchup, demolishing the Gladiators 10 to 0. Blair's quick forwards and midfielders came out strong in the first half, controlling possession of the ball and scoring 5 goals. Northwoods inability to maintain possession and put pressure on Blair's defense allowed the Blazers to control the pace of the game and distribute the ball unchallenged. The Blazers strong play in all aspects of the game resulted in a definitive victory. 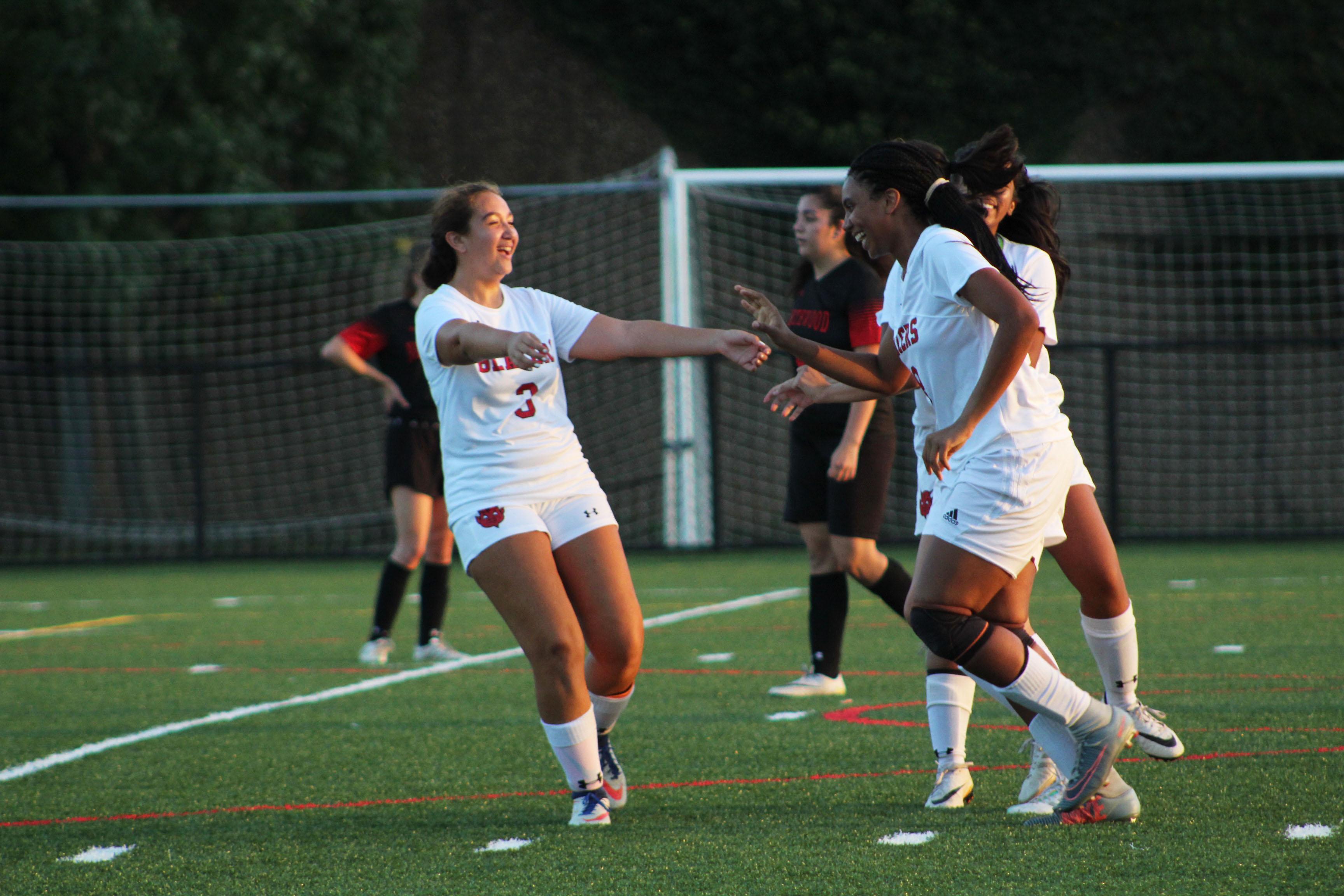 Photo: Blazers celebrate after a second half goal.

Photo: Blazers celebrate after a second half goal.

The Blazers came out firing, with two shots on goal within the first five minutes. Blair's starting center-midfielder, sophomore Rachel Day, stole the ball from Northwoods unorganized midfield and sent a through ball to striker and junior captain Maddy Merrill. Merrill dribbled the ball into the 18 yard box and managed to get a shot off, but it deflected off a defender, resulting in the first Blair corner. Northwoods defense cleared the ball and launched a counterattack,easily dismantled by the Blazer's defense.

In the 14th minute, Merrill launched a through ball to senior center-forward and captain Nina Jefferies, who took a shot just outside the 18 and blasted the ball into the top right corner of the net for Blair's first goal of the game. After a Northwood kick-off, the Blazers quickly regained possession and won a corner. The ball, crossed in by Merrill, slid through the Gladiators defense to sophomore Dede Greenfield, who passed the ball into the bottom right corner. Greenfield scored another goal by outmaneuvering two defenders and beating the keeper. Blair scored twice more before the end of the first half. Northwood was unable to mount an offensive drive successfully, leaving Blair keeper Bernadette Hargrove inactive.

Northwood fought back hard in the beginning of the second half. The Gladiators midfielders worked the ball through Blair's defensive line and managed to get a shot off on goal, which Blair keeper Zoe Abram scooped up and quickly distributed to her right-back. Blair launched a counter-attack and won a corner off a Northwood deflection. In the 49th minute, Merrill stripped the ball from the Gladiator's center-back and fired off a quick shot into the top right corner to score the 6th goal of the game. The Blazers scored an additional 3 goals directly after in a timespan of 10 minutes.

In the last 20 minutes of the game, Blair transitioned its focus from scoring to keeping possession. Merrill and Jefferies both switched positions from striker to center-mid and Coach Robert Gibb substituted out the usual starters to allow for other players to get time on the field. At this point in the game, Northwoods defense and midfield began to fall apart as Blair increased their possession of the ball. The Blazers coming off the bench continued to control the pace of the match and dominate possession. In the last 10 minutes of the game, Coach Gibb subbed in Blair keeper Hargrove as a forward. In the final 5 minutes, Hargrove received a cross from Greenfield and volleyed the ball into the net, scoring the last of Blair's ten goals.

Blair had over 24 shots on goal while Northwood had 1. Coach Gibb commented that he was proud of the girls performance. "It's our first divisional game and we're glad we could get off to a good start. Its nice that all the girls got playing time and it was good to see 80 minutes of quality soccer." Gibb said.

Despite the decisive victory, many of members of team admitted that they could have done certain things more efficiently. "We need to pass more quickly and improve accuracy if we want to stay competitive against better schools," Merrill said.

The Blazers will have the chance to build on this victory when they face the Springbrook Blue Devils at Springbrook, this Saturday the 23rd at 2 PM.