Blazers win their division for the third year in a row

On Oct. 1, Blair's girls' varsity soccer team beat Sherwood 5-0 to win the division title for the third consecutive year. The Blazers finished the regular season with a record of 8-4-2, putting them in third place in the county.

Four years ago, the Blazers were in a different division with Whitman, Bethesda-Chevy Chase (BCC), Walter Johnson and Churchill. The league realignment put Blair in a division with Sherwood, Northwood, Paint Branch and Springbrook. Since this change, Blair has won its division every year, with the division title boiling down to their final game against Sherwood.

Senior team captain Maddy Merrill is used to winning the division title and has higher aspirations for the team this year. "We really want to go far in the playoffs and hopefully make it to the regional final like we did two years ago," Merrill said. 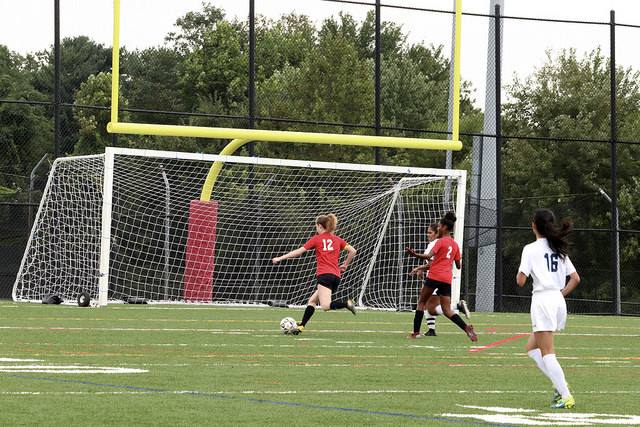 Photo: Senior Maddy Merrill takes a shot on an open goal against Springbrook in a 8-0 Blair win.

Photo: Senior Maddy Merrill takes a shot on an open goal against Springbrook in a 8-0 Blair win.

Coach Robert Gibb felt like the team played their best game of the season against Sherwood and will need to keep up the momentum in the playoffs. "It was probably our most complete game of the season. The team was focused and we felt ready to play them. If we continue to play like we did then we can go pretty far this season," Gibb said.

The Blazers had their ups and downs throughout the season, starting off with a winning streak and then taking some tough losses down the road. Their win against Sherwood was definitely a positive part of their season, as it was one of their best wins as a team. They played well throughout the whole game and were able to keep the pressure on Sherwoods' defense, allowing them to win 5-0. They finished the season losing the last two games, getting blown out by Churchill (6-0) on senior night and losing to Richard Montgomery in overtime (3-2). These two loses, while tough, does not affect their playoff positioning.

Merrill felt that the losses the team took throughout the season were important in identifying improvements on ball control and consistency that need to be made before playoffs and said the team is working together to make those adjustments. "The loss to Richard Montgomery showed us that we still have to improve. Now after a few setbacks we're rebuilding our confidence and making sure to be supportive of one another," Merrill said.

Since the Blazers won the title, they will have a bye in the first round of the playoffs and then will get the home field advantage against Sherwood in the next round on Oct. 30.