In their first home game of the season, the girls' varsity volleyball team (1-1) defeated the Wheaton Knights (0-2) in three sets, with a final score of 25-12, 25-9, 25-20. Forceful serves and powerful attacks shaped the Lady Blazers' offensive strategy and contributed to their sound victory. 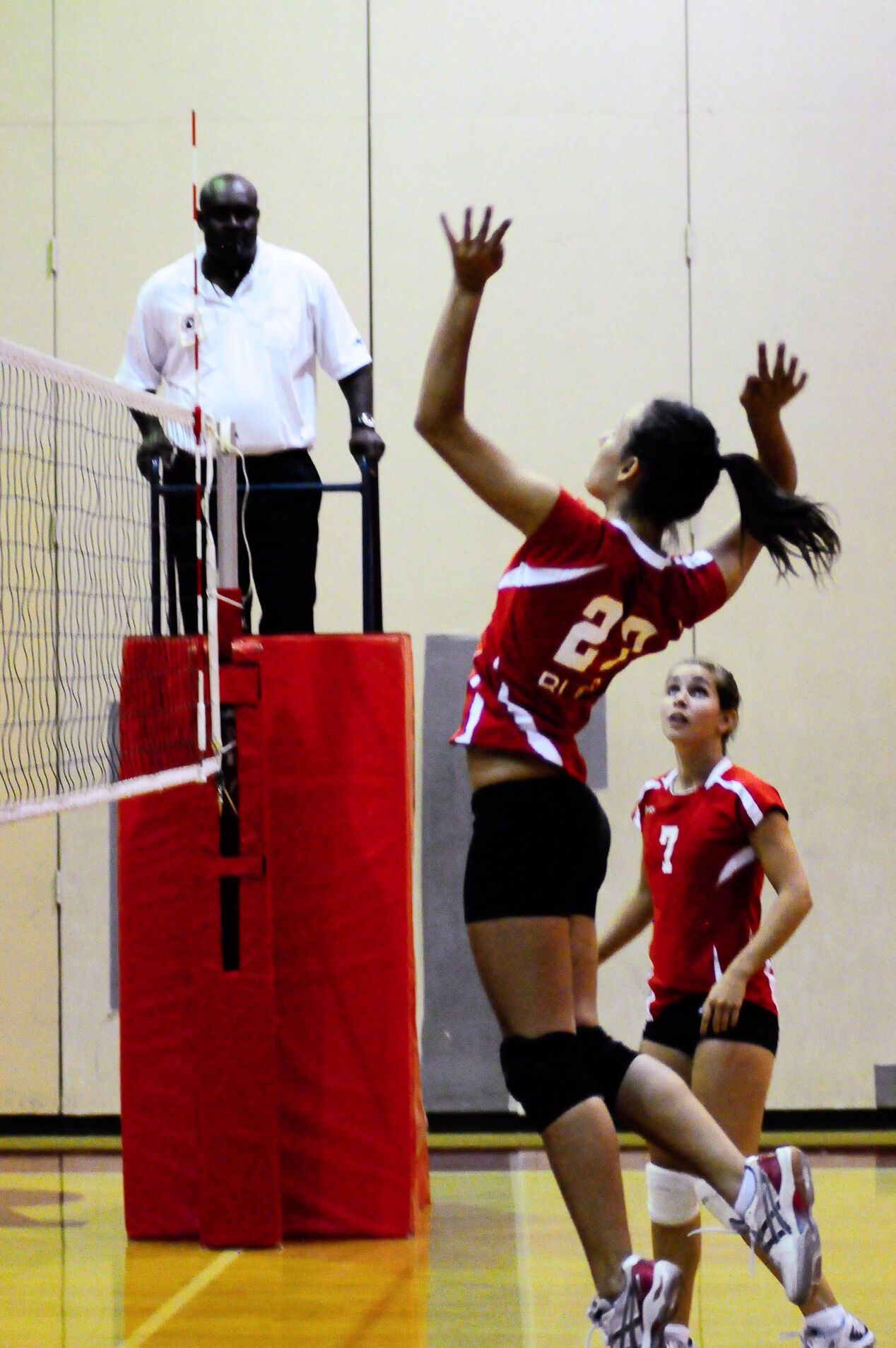 Photo: Senior Anna Ferrario prepares to hit the ball on to Wheaton's side.

Photo: Senior Anna Ferrario prepares to hit the ball on to Wheaton's side.

Sophomore captain and setter Kathlyn Skolnik started off the game with powerful jump serves resulting in nine aces. Wheaton lacked power in their serves and hits, costing them several points in the first two sets. The Knights' inability to dig Skolnik's aces contributed to Blair's wide margin of victory at the end of the first set.

The Blazers showed the Knights no sympathy in the second set. Junior captain and outside hitter Nika Lilley led the offensive and contributed seven kills to Blair's final score. Head coach Christopher Klein was proud of the team's court awareness, in addition to their hitting and serving. "I changed things up quite a bit tonight and everyone knew where they were supposed to be," he said.

Blair kept up its momentum with four kills and five aces from freshman outside hitter Dominique Pope. Sophomore right back and outside hitter Elizabeth Liu experienced a brief hitting streak during the second set, putting Blair further in the lead. When the Knights managed to get three touches and send the ball over the net, junior libero Libby Wei returned the ball with sky-high bumps to the setter. Wheaton scored only nine points in the second set before senior middle hitter Anna Ferrario forced the Knights off the court with a commanding spike. 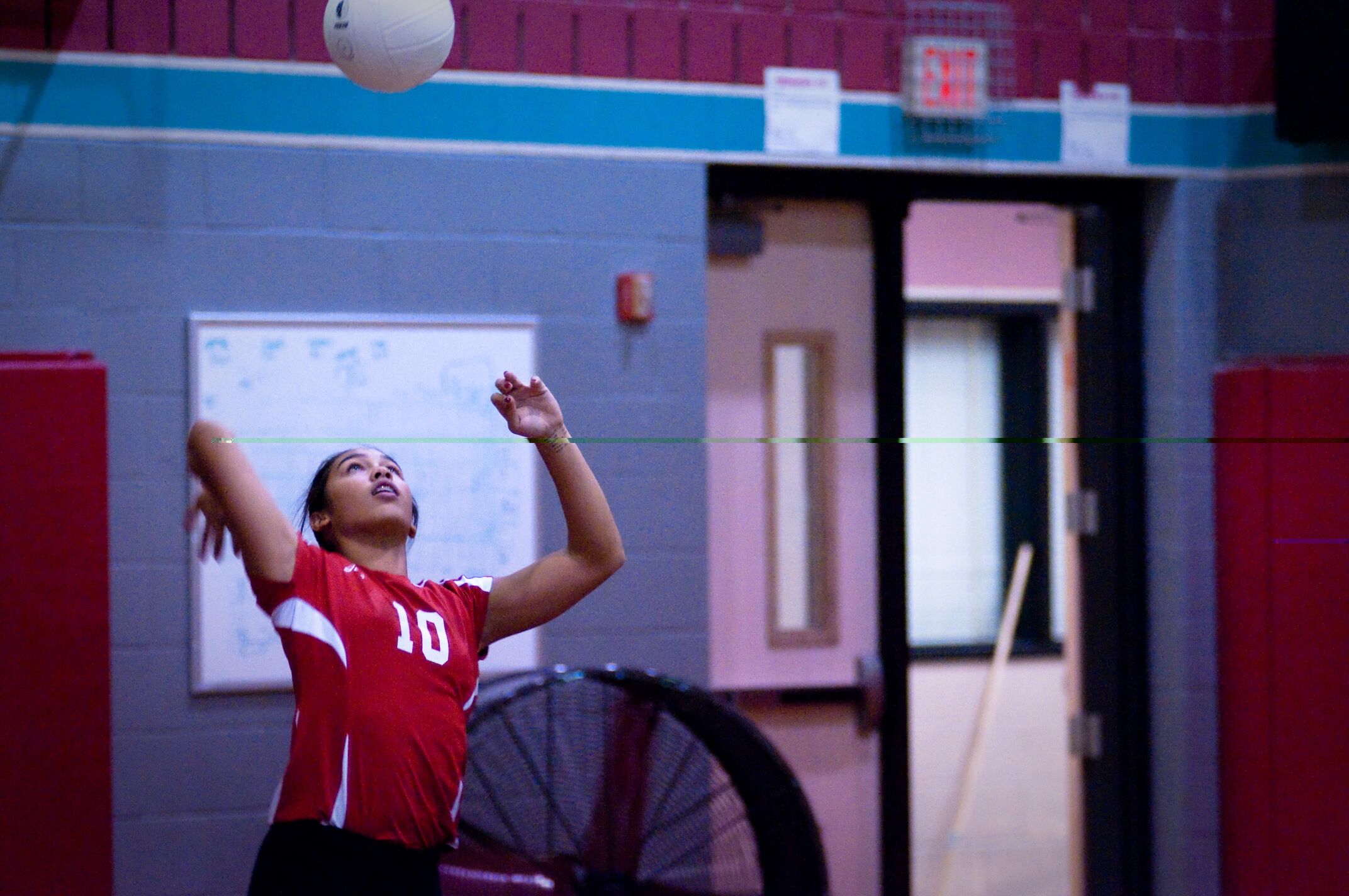 Photo: Freshman Dominique Pope serves the ball over to the Knights.

Photo: Freshman Dominique Pope serves the ball over to the Knights.

Though the Blazers effortlessly dominated the first two sets of the game, Wheaton kept fans on their toes toward the end of the third set. As Blair got closer to earning the 25 points needed to win, the Knights kept the rallies going by resorting to safe underhand serves. According to Skolnik, weariness grew in the Blair players toward the end of the third set, causing them to make trivial defensive errors. "We got tired and fell back," Skolnik said. "Next time, we'll finish wrapping it up."

Although Wheaton managed to lessen the margin of Blair's victory to 25-20 in the third set, they never managed to pull ahead. According to Wheaton head coach Alex Theoharis, Wheaton did not have the skills to match those of Blair. "[Blair's] a strong team," Theoharis said. "They had strengths where we had weaknesses."

Rather than an offensive play from Blair, a penalty from the Knights in the third set involving a girl stepping under the net gave Blair their winning point.

Although Blair won this game, Klein believes the team needs more practice with staying energetic. "We need to run faster and have more aggressive offense," he said. Lilley agreed that the team's passing skills have room for improvement.

Varsity girls' volleyball will play their next home game Monday, Sept. 13 against Northwood at 3:30 pm.