In 1965, the war in Vietnam was raging, hippie fashion was in, and the price of a gallon of gas was 31 cents. 1965 also happens to be the most recent year that Blair football won a title. Fast forward to 2011, and Blair's football glory days seem to be fading from memory, as years of losing records put a damper on the football season. 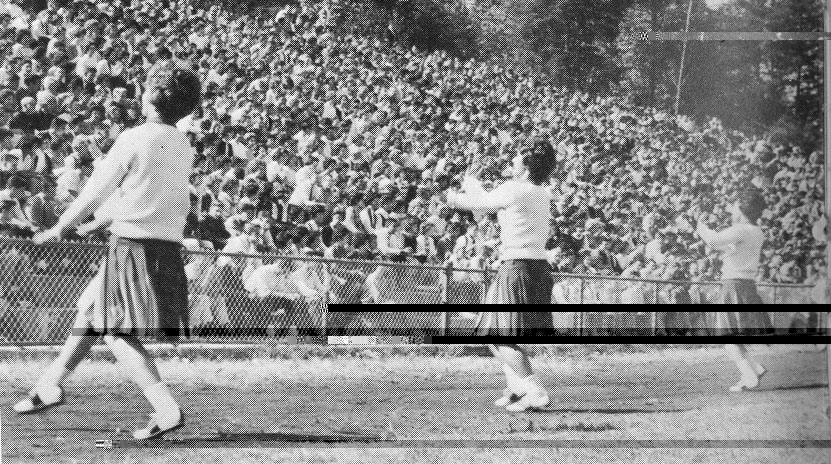 Photo: In previous decades, fans packed the stands at every game.

Photo: In previous decades, fans packed the stands at every game. Photo courtesy of Courtesy of Silverlogue.

Blair football has become a regional joke in some senses, but it hasn't always been this way. It's important for Blair students to look back to all that our predecessors accomplished, and take a look forward to see what new crops of Blair athletes can bring.

In the 1950s and 60s, Blair was an absolute football force in the region. During a fifteen year period, the team amassed six county wins and had two undefeated seasons. The team was a popular discussion topic among students, and sports were king in the school. It was not uncommon for the old Blair stands to be completely filled during home football games, with attendances of over ten thousand people; not just students, but also parents, members of the community and media personnel. Football wasn't only a high school sport; it was a community event.

Mark Levine, president of the Blair Alumni Association, recalls seeing the class of 1958 graduate Bob Windsor play in football games. Windsor later went on to play in the NFL. Levine remembers Windsor as a formidable player. "He'd just slaughter people," Levine said. Windsor had a successful career as an NFL player, playing for the San Francisco 49ers and New England Patriots. He started playing football as a sophomore at Blair, but quickly rose through the ranks to take on leadership positions. His best memories of playing at Blair involved a game in which the Blazers destroyed Walter Johnson. Windsor scored a total of four touchdowns during the game, and had seven interceptions. 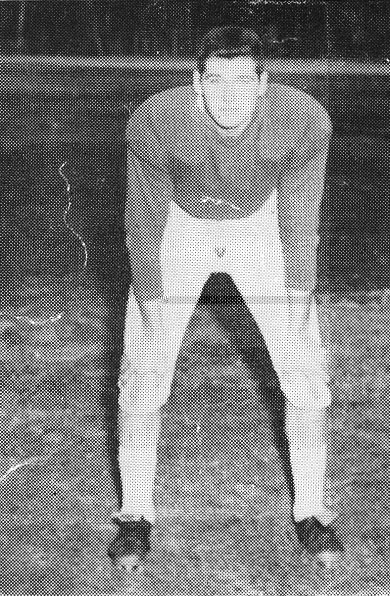 1958 graduate Tommy Brown is considered by many to be one of the best athletes to graduate from Blair - he played baseball for the Washington Senators in the early 60s, and then switched over in 1964 to play football for the Green Bay Packers.

During high school, Brown played football, basketball and baseball, which was not uncommon at the time. And while he says that he preferred baseball over the other two sports, Brown still has fond memories of the football team and continues to keep in touch with teammates.

According to Brown, the athletic culture was more visible back then than it is today. Brown recollects playing neighborhood pickup games frequently when he was a kid. Starting anything from a young age has its advantages, and Brown believes that the informal games when he was younger allowed him to get better at a variety of sports. "It was the thing we did," he said. "We played every day when we were growing up in the summertime."

Brown thinks that this crucial part of his childhood is missing in today's world of speeding technology. He believes that distractions that keep kids inside, like computers, game systems, and high-tech TVs, produce less motivated players. And even though the start of the technology wave was present in the 70s, current security guard and class of 1975 graduate Cedric Boatman still says that he went outside way more than kids do nowadays. "Back then it was fun," he said. "We didn't have Nintendos and cellphones; we had TV and radio and that's it." He stressed that because nothing was portable, people would leave to go hang out with their friends not with a cell-phone, but with a ball. "People went out…the socializing was through some kind of sport," he said.

In addition to added distractions and a change in social norms, the shift in regional demographics has made Blair football less successful over the years. Back in the day, the Silver Spring and Bethesda areas were the buzz of the county and the wealth was concentrated in those areas. Over the years, a lot of the money has moved upcounty, and along with it have moved competitive boys and girls clubs and other athletic teams. In competitive sports like soccer, football and basketball, there is a huge advantage in starting play from a young age, and many of these advantages are available upcounty rather than downcounty.

Health teacher and class of 1980 Blair alum John MacDonald has been able to personally witness some of this change. "The dynamics of the county have changed," he said. "If you are an athlete, you have to go upcounty for leagues." He also stressed that many of these athletes also go upcounty for high school in order to take advantage of more competitive programs.

For example, some up county schools like Quince Orchard even have recruiting programs and feeder schools, which allow them to develop their athletes from a young age. According to senior and varsity football co-captain Peter Gondor Quince Orchard is consistently one of the toughest teams in the area, and part of this due to the volume of talent and resources that they have available.

Blair is the largest school in the Montgomery County Public School System at 2,790 students, and yet the number of people who show up for football tryouts is the same at schools a third of our size. According to Gondor, it's hard to work with the number of people who actually show up to practice. Gondor regrets that more people don't try out for the team, "People are just lazy," he said. "Or they don't want to play because they think the team sucks."

Despite not having the ideal manpower, Head Football Coach and class of 1977 graduate Jeffery Seals thinks that Blair has some strong dedicated athletes who could make it big. "They have potential," he said. "But a lot of it is luck of the draw."

Seals doesn't believe that the current standing of Blair football will get in the way of a prospective NFL bid, and in the past, it hasn't. Visanthe Shiancoe, the current Minnesota Vikings tight-end, played at Blair in the late 90s and saw few victories as a Blazer. One year, they lost every game except for one - but Shiancoe stressed that he still had fun playing for Blair. "I just liked football itself, it wasn't about winning at that point," he said.

Even though he came from a weak high school team, Shiancoe still made it big. He is a well known player among football fans, and he did not allow the Blair standings to get in the way of his becoming a professional football player.

One of Shiancoe's best moments of playing football at Blair could not have happened if the Blair football team consistently won games. After a streak of losses, the Blair team finally won a game, and Shiancoe and his teammates entered school the following day to find the walls covered in posters congratulating the team and speculating that "Blair is finally going to start winning." Shiancoe said, "It felt great. We had the school behind us."

According to senior captain David Chow, the team could benefit from more school-wide support. Chow believes that people shouldn't just focus on the team's record, but should appreciate instead the amount of work and commitment that goes into training. "It's really annoying because I put so much work in and people don't seem to care," he said. "There's this negative image of Blair football that we suck, but maybe we suck because we don't get enough support."

Much has changed since the 1960s. We aren't called the Blairites anymore, and our mascot is no longer Pokey the Teddy Bear (look it up, it's real). And, while we aren't the big football school of the 50s anymore, Blair excels at plenty of other athletics - in addition to academics of course.

This past spring, three of our sports teams made it into high levels of playoff competition. Boys' volleyball won counties and was uncontested at States, the Gymnastics team won the State Championship and the girls' softball team made it into the state semifinals. So far this fall, none of the teams are doing too hot but we can look forward to strong winter and spring sports.

Be on the lookout for that perfect football record (it did happen in 1955 and 1965) but until then, let's support our football team - and other sports teams - through the thick and thin.