Every friendship is full of stories, sentiments and unforgettable moments shared together. "Sideways," the latest triumph by director and writer Alexander Payne ("About Schmidt"), deals with the complex subject of relationships in a way that is moving, intelligent and hilarious all at once. 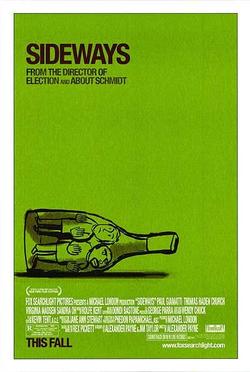 Miles (Paul Giamatti, "American Splendor") and Jack (Thomas Haden Church) are two friends who are experiencing midlife crises. Miles is a middle-school teacher, a lonely divorcee, an aspiring writer and an enthusiastic recreational wine connoisseur. Alas, as of recently, Miles finds himself turning into an alcoholic. He also can't get his novel published. Jack's situation is just as unfortunate: He is a sex-obsessed, washed-up soap-opera actor about to get married but now is having strong second thoughts.

Overcome with their woes, Miles and Jack decide to embark on a week-long road trip through California to help sort out their problems before Jack's wedding. Both Miles and Jack have different agendas for the vacation. Miles sees the trip as an opportunity to share his love of wine by taking Jack to wine-tasting festivals while Jack is determined to find some romantic fling action for himself and Miles, believing that would cheer up his morose friend.

Together Miles and Jack manage to accomplish their goals to a much deeper degree than they planned. Through Jack, Miles gets close to the bright and caring Maya (Virginia Madsen), and Jack heats things up with the vivacious and spunky Stephanie (Sandra Oh). Through Miles, the duo strengthens their bond through both serious and comical situations they get themselves into on the road, in their motel room and at wine festivals.

The magnificent screenplay of "Sideways," written by Payne and Jim Taylor and based upon the novel "Sideways" by Rex Pickett, connects various themes, such as disdain for life and finding the will to persevere. The screenplay's superb mix of excellent characters, thoughtful dialogue and a seamlessly developed plot make "Sideways" a remarkably funny and dramatic movie.

"Sideways" has a diverse spectrum of humor, and each scene involving comedy differs greatly but is always greatly amusing. In one scene, Miles and Jack can be seen raising a ruckus, chasing an old man through a golf course for interfering with their game. In other shots, the two oddly paired comrades' contrasting personalities bring the laughs. Some of the best comedy in the film pops up at the wine tastings the duo attend; the critical Miles will go on long-winded rants comparing the taste of a specific wine to being as dreadful as "licking the back of a bus" or eating tar. His tirade is followed by the much more optimistic Jack replying, "I don't know, man, tastes pretty good to me."

The dramatic portions are just as effectively scripted as the humorous portions of "Sideways." The film uses dialogue in one scene to create a profound metaphorical connection between wine and the very cycle of life and the rare pinot grapes Miles loves so dearly to his very own fragile and dependent existence. Furthermore, as the movie progresses, both Jack and Miles begin to look deeper within themselves in a way that is unconventionally moving.

The acting deserves just as much recognition as the screenplay. Giamatti's portrayal of Miles is soulful, making the character mesmerizing. Jack is the perfect foil to Miles' pessimistic disposition; his presence on screen never fails to lighten up any given scene. Adolescent audiences need not fear being unable to relate to the middle-aged characters of "Sideways," the entire cast gives performances that make each character impossible to not sympathize with.

Rich, tasteful, deep, strong, rare and memorable, "Sideways" is a fine wine of a movie.

"Sideways" (123 minutes) is rated R for language, some strong sexual content and nudity. It is now playing at the Landmark Bethesda Row Cinema and Landmark E Street Cinema and opens Jan. 28 at the Majestic 20.