North Korea has long been painted as a country of oppression, with inhabitants coerced into submission by the domination of its totalitarian government. However, in stark contrast to this negative characterization, photos of a summer camp called the Songdowon International Children's Camp have emerged. The camp is commissioned by the government and attended by 300 campers from around the world. The pictures depict some of the different activities that campers can enjoy: spending time on the beach, dancing, singing, arts and crafts. The children appear happy and carefree; the camp appears state-of-the-art. However, the camp is just a false pretense of positivity for the government, instead of a genuine attempt by the government to create a nurturing community for children over the summer. 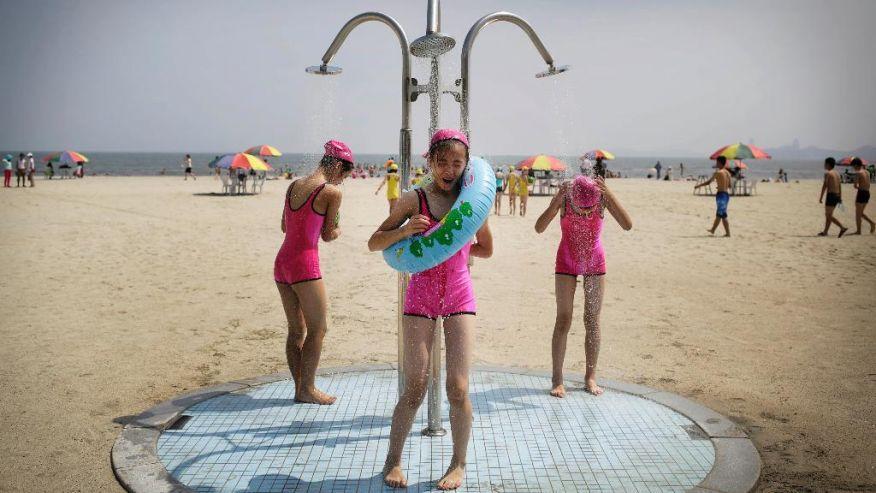 Photo: Campers take a cool shower after a day at the beach.

Photo: Campers take a cool shower after a day at the beach.

A closer look at the evidence tells the truth. The pictures presented from the camp online are all taken from a set of under twenty, and were disclosed by the North Korean government. No other pictures of the experience taken or brought home by campers were spoken of or revealed. This lack of corroboration casts a suspicious light upon the actual purpose of the pictures; the camp appears to be a ploy to suggest that North Korea is embracing relations with other nations as well as implementing more empathetic regimes, when in real-world politics, it makes no such effort. The indication that the camp is merely a political tool has its roots in the camp's founding, over 40 years ago.

The camp started in the 1960s, when it was established to foster ties between North Korea and other communist nations. As North Korea withdrew from worldly matters over the years, the camp soon became an opportunity for children to learn more about the isolated nation.

Indeed, though it underwent a renovation last year, which involved offering more activities to the children and allowing more international students to attend, it's still an attempt to politically socialize the children. Giant burnished bronze statues of Kim Il-sung and Kim Jong-il tower over campers in an open courtyard. As part of festivities, campers learn songs in deference to Korea's political leaders. It would appear that this political influence is a mellow form of subjugation by North Korean standards.

Politics in the camp aside, it is important to consider the brutal irony of this "fun" summer camp compared to the plight of the rest of the nation. Millions of North Korean citizens suffer from malnourishment and inadequate health services. Due to malnutrition and poor sanitation, a third of children under the age of five show signs of stunting and diarrhea is a leading cause of death for children. So, while the rest of the nation lacks the provision of basic health services, international children can experience the air-conditioned dorms and succulent food provided for them by the government at exceptionally low rates.

Another irony in North Korea is the seeming counterpart of these happy summer camps, the adverse labor camps. These camps are meant for supposed 'criminals,' but are instead filled with innocent civilians, whose stories of these camps shake the international community. Shocking survivor stories from a mother who had to kill her own newborn and an old man who had to eat dirt and grass to survive uphold the gruesome picture painted of the government.

However, despite this compelling evidence against the supposed magnanimity of North Korea through this summer camp, some still argue that the camp signifies an attempt by the government to turn things around. Such blind optimism can only be founded by an ignorance of the past and the present. North Korea has been in the past, and remains to be under a cruel totalitarian regime. By turning a blind eye to the predicaments of its own people, and instead opening a luxurious summer camp, the government does not exhibit any attempt at compassion or humanity. The camp is merely a political tool, and should be another reminder not to believe the tailored lies intermittently set forth by the country's venal government.