How the term “OK Boomer” is massively misunderstood

Older generations have been mocking younger generations for years. Fast forward to 2019 and young people have clapped back with the term “OK Boomer.”

Older generations have been mocking younger generations for years. We’ve all heard our grandparents complain, “kids these days” or “when I was your age…” Back then, kids never had a ready response. Fast forward to 2019 and young people have clapped back with the term “OK Boomer.” The joke hasn’t been taken lightly. Boomers have characterized the term as discriminatory, specifically, it has been described as “ageist.” To describe the term as ageist belittles the experience of people who face actual systemic oppression. And honestly Boomers, it’s just a meme.

In case anyone forgot, let's define a few things. “Boomer” is short for “Baby Boomer” which is a label for people born right after World War II. There was a huge spike in birth rates after the war because, well, the men came back. The meme “OK Boomer” originated from a video of an unidentified older man, claiming that "millennials and Generation Z have the Peter Pan syndrome, they don't ever want to grow up.” The term is used to call out older generations’ ignorance when it comes to current issues, such as climate change and LGBTQ issues.

In addition, the term “OK Boomer” is a response to the ways Boomers treat younger generations. Boomers frequently make comments that suggest that they are wiser and more knowledgeable than younger generations. For Millennials and Gen Zers, “OK Boomer” is their objection to being patronized. It’s a way of fighting back from the older generation’s dismissive and mocking comments. The term reflects how things have changed, and how older people are being held accountable for their failure to appreciate that.

Instead of appreciating the meme as a joke, Boomers have become defensive and pulled the “respect your elders” card. They claim that the term is ageist and offensive, so much so that it has been banned from some work environments. According to the National Law Review,  the Age Dicrimination in Employment Act makes age a protected category. Under this Act, comments like “OK Boomer” can be interpreted as discriminatory and derogatory. It is worth noting that this Act does not cover people under the age of 40, suggesting that age related comments directed towards younger people are not similarly protected .

Millennials have been contending with jokes aimed at them from the moment they were deemed “Millennials.” Whether it's a comment about being spoiled or living off of avocado toast, Millennials heard it all. They take a different approach by making Boomer criticism into jokes and memes. 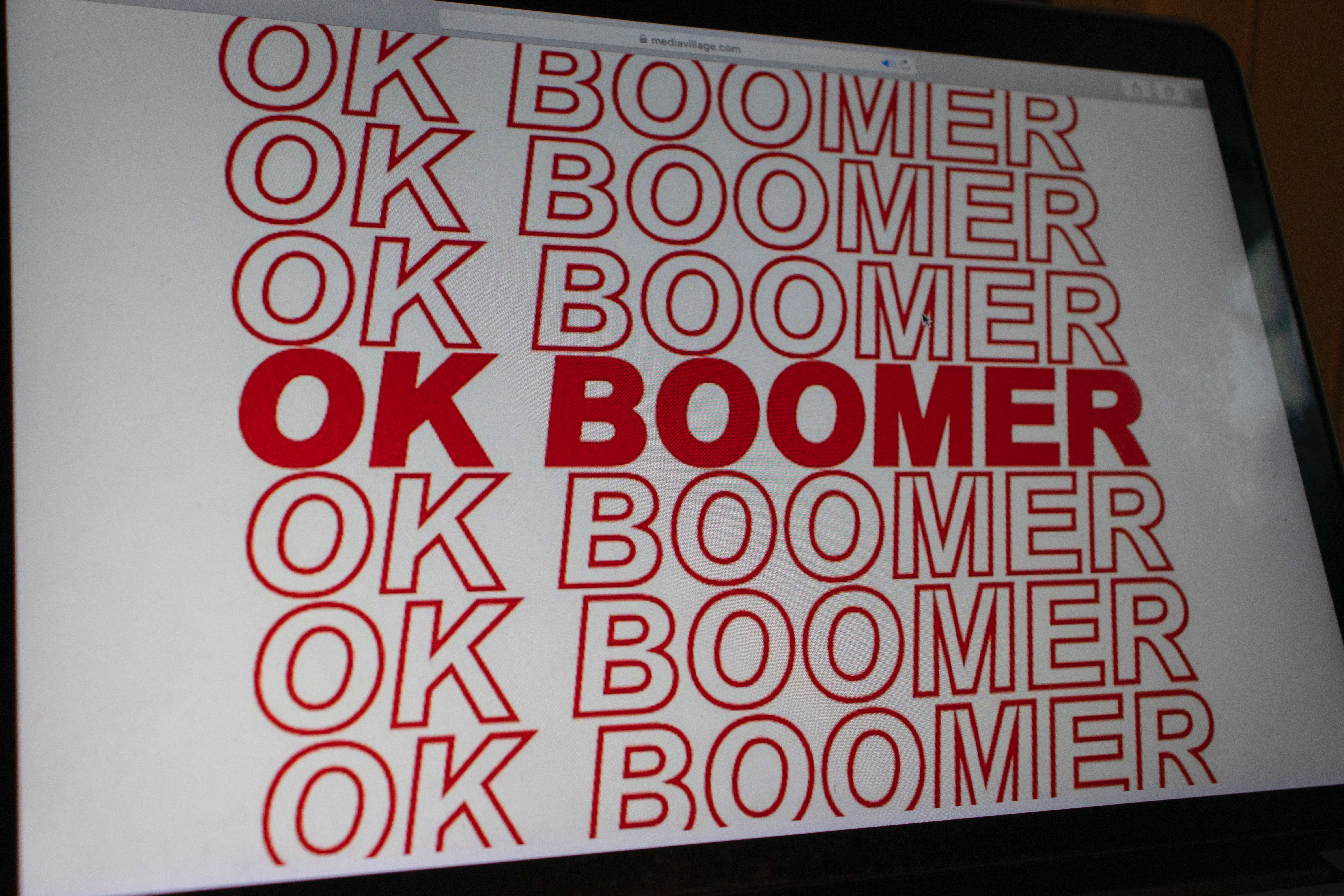 Photo: It's what the kids call a “meme” (courtesy of Sydney Hastings-Wilkins).

Photo: It's what the kids call a “meme” (courtesy of Sydney Hastings-Wilkins).

In Millennials efforts to respond to Boomer ignorance, they have been characterized as ageist. The notion of ageism, like sexism and racism, implies an oppressor and their ability to interfere with someone's well being. Young people do not have the capacity to oppress older people because they are not positioned to actively oppress Boomers. “OK, Millennials. But we’re the people that actually have the money,” says senior vice president of AARP Myrna Blyth according to MarketWatch. Note that this is the single instance in which Boomers take Millennials seriously. The power dynamic will always be in Boomer’s favor.

Boomers, younger generations aren’t trying to oppress you. After all, they are actually very progressive in that department. They are trying to defend themselves and call out ignorance when they see it. Instead of feeling disrespected, take “Ok Boomer” as a wake up call. Understand that younger generations are painfully aware of social justice issues and environmental issues. Boomers, who were a big part of the social justice movements of the 60s, should recognize the campaign for equality millennials are advocating for. It’s time to move on from the generational gap and realize that everyone is fighting for the same cause.