"Into the Woods" cast smaller than other musicals'

This year's spring musical, "Into the Woods," will have a considerably smaller cast than usual, and many students who usually participate in the school plays will not be able to. Although the original cast for "Into the Woods" is very small, director Kelly O'Connor added a few roles to create an ensemble. Over 80 students auditioned for the musical and 44 made the cast. 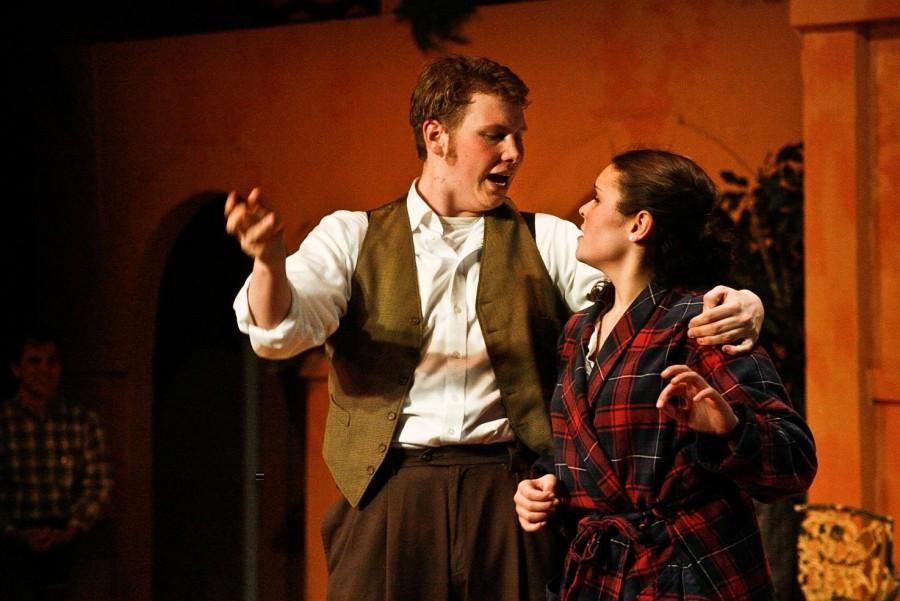 Taming of the Shrew

Photo: Seniors Peter McNally and Maya Davis starred in "The Taming of the Shrew and the Tamer Tamed," which had a large cast to compensate for the upcoming musical's small ensemble.

Photo: Seniors Peter McNally and Maya Davis starred in "The Taming of the Shrew and the Tamer Tamed," which had a large cast to compensate for the upcoming musical's small ensemble. Photo courtesy of Emma Howells.

According to junior Alex Michell, who is taking part in "Into the Woods" and has participated in past Blair productions, there is a limited amount of quality musicals with large casts. "[There] aren't that many good musicals that have a big ensemble; sometimes you just have to chose the smaller one," he said.

Since there are no background characters in the spring musical, every actor will play a significant role. "'Into the Woods' is a great play with a lot of really strong roles. Every [actor] gets a big scene, even small roles are memorable," O'Connor said.

Michell acknowledged that there are not many plays with appropriately sized casts for Blair to put on. "[We] did [a] show with a huge ensemble last year and that was great, but there are limited [good musicals] with an ensemble as big as "Les Miserables."

Into the Woods cast

Photo: The "Into the Woods" has a much smaller cast than typical Blair plays.

Photo: The "Into the Woods" has a much smaller cast than typical Blair plays. Photo courtesy of Emma Howells.

In addition, according to O'Connor, more girls generally audition for the musicals than boys. Because of this, the amount of suitable performances for Blair is limited. "Some shows I can never produce here because there is too small a cast [and there are] not many girl parts," she said.

Junior Dana Cook, who is taking part in "Into the Woods" and has participated in past Blair productions, highlighted the benefits of the show having understudy roles. "Because there are understudies it kind of makes up for the fact that there is a small cast. There is a double, what would be one part is now two," Cook said.

O'Connor enjoys her job, but she realized that rejection is the hardest part. Next year, she hopes to make up for the fact that not all of those who wished to partake in this spring musical were able to. "Next year it will not be a show that is as exclusive as ["Into the Woods,"] she said.

Cook believes that there are benefits of being part of both a large and small cast. "Having a big cast is way more diverse; there [are] lots of different groups of people [while] in a smaller cast the experience will be more intimate," he said.

O'Connor is looking forward to this year's musical and enjoys working in such a supportive environment at Blair. "It is going to be a great show. I love doing shows at Blair, " she said.