It's a tough game

On Sept. 20, Denver Broncos' Wide Receiver Kenny McKinley was found dead in his Colorado home from an apparent suicide. McKinley was a second-year pro placed on the team's injured reserve list. And his tragic case, unfortunately, is not the first of its kind. Athletes on all levels face innumerable pressures and expectations the second they put on their jersey, but we must remember that, even though they may be our heroes, these people are only human. 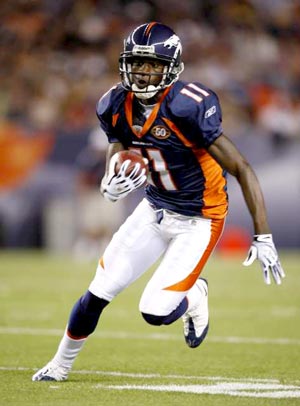 McKinley appeared depressed after the knee surgery that left him sidelined and even mentioned suicide to friends, according to Arapahoe, Colorado County Sheriff's report. The report stated that McKinley wasn't sure what he would do without football. Close friends noticed that McKinley missed being on the field and seeing all of his teammates but it never appeared that he might harm himself. Whatever the case, McKinley died of a gunshot wound to the head with the National Football League (NFL) blaring from his television.

The tragedy of McKinley highlights the burdens placed on athletes to perform at a top level for every second of every game. Factors such as the status of the team and its owners, the ceaseless media attention, million-dollar salaries and pressure to perform have all added to the emotional toll that athletes carry. "Stress-related illnesses are extremely common in professional sports, and they are becoming more so as the pressures on athletes increase. The expectations are enormous and sometimes people cannot handle it," Dr. Barry Cripps, Chairman of the Sports and Exercise Division of the British Psychological Society, said in an article in The Independent Newspaper.

Last May professional golfer Erica Blasberg was found dead in her Nevada home, also from an apparent suicide. Blasberg's agent said her bags were packed for an Alabama golf tournament when she was found. Blasberg was a former junior golf standout, an All-American in 2002 and 2003 and was the 2003 NCAA Freshman of the Year. She ranked as high as 44 in the one event she played this season. Blasberg had mentioned to her father that she was having trouble dealing with all of the pressures of the sport, always having to do her best and was never completely happy. Red flags had been raised in Blasberg's case, but sadly it was all too late.

For adolescents, sports can also be extremely demanding. Even in Montgomery County Public Schools (MCPS), most teams practice five to six days a week for at least two hours a day. Student athletes face demands from coaches, peers, teammates, parents and, on top of it all, themselves. The great pressures of school also add to this growing pile. Student athletes work hard every day, practicing for that next homerun, touchdown or goal, because of their love of the game and desire to do better.

But sometimes this pressure can be a good thing. Good stress, formally known as "Eustress", is defined as "a good type of stress that stems from the challenge of a pleasant activity…(it) pumps you up, providing a healthy spark for any task you undertake,” according to a study done by the Northern Illinois College of Education. Eustress can help athletes and everyone else for that matter, perform at their very best and get work done. Playing sports is also stress-reliever for many. Joining sports teams can help people stay active, increase their self-esteem and teamwork skills. "I can't stress the importance of working hard enough, work on all aspects of your game. If you do that and you have the ability, you'll come through," Frank Lampard, English footballer, once stated on the subject.

Sports are part of American culture, our nation's pastime and future, and it is the players and coaches who need to be credited. They work hard, through the countless pressures we place upon them, to play the game they love. Sometimes the pressures are overwhelming, and like Kenny McKinley, some fall to them. Both Major League Baseball and the National Football League have programs aimed at helping athletes with stress management and this writer would implore all sports programs to do the same. Athletes are people, and, even though we watch them in High Definition, they are only human.