Falling asleep in class: not the most embarrassing thing you can do in your high school career, but it's not the classiest thing either. It's also not surprising, considering how much we stress over tests, quizzes, extracurriculars and homework. It's a wonder Blazers can manage to keep their eyes open during class when we consider a "good" night consisting of five hours of sleep. But, weary Blazers, as we all know, sleep is becoming as obsolete as AOL with the advent of drinks like Red Bull and 5 Hour Energy. So when you're up until a million o'clock working on that English paper, a few of these quick fixes might be handy for an energy explosion. Photo:
if you want four hours of sleepiness and an hour of nervous mania. Extreme 5-Hour Energy doesn't kick in until the last hour - not the best aid for concentration in seventh period and it doesn't make you alert or focused. Quite the opposite, you may experience an accelerated heart rate combined with listlessness.

It's effective for keeping you up, but it also guarantees that your night will be filled with way too many jitters and paranoia. Studying for a math test? Good luck trying to get though a problem in one sitting. Extreme 5-Hour Energy will make staying still for longer than 10 minutes physically impossible, not to mention you'll be worrying about things that don't even exist.

In the end, the only thing Extreme 5-Hour Energy will do for you (if you drink enough of it) is get you admitted to an asylum, or at least to a psychiatric hospital for observation.

A crash course in Spike

Due to the epic effects of Extreme 5-Hour Energy, neither of us were looking forward to trying Spike for the first time. The ferocious fizz combined with the over sweet bubble-gum flavor did little to quell our misgivings about the drink. Predictably, a waterfall of energy fell over us a few minutes after drinking Spike, and for all of first period we were literally shaking with energy.

Unlike 5-Hour energy, Spike does not induce heart palpitations and nervous paranoia. Spike can, however, cause a mild to moderate energy crash, but these crashes tend to lessen in intensity the more acclimated you are to the drink. So when you need a quick fix for a night of cramming or after a serious slumber party, Spike might be the right fix for you, just make sure you start slow and let your body adjust.

The power to fly

They said that Red Bull gives you wings, but in reality it's better at giving you a massive headache. The can says it's supposed to taste like "Cola", making Red Bull the first energy beverage that sounds reasonably flavored. Once you take a swig though, you realize it's less Cola and more...col-ugh. 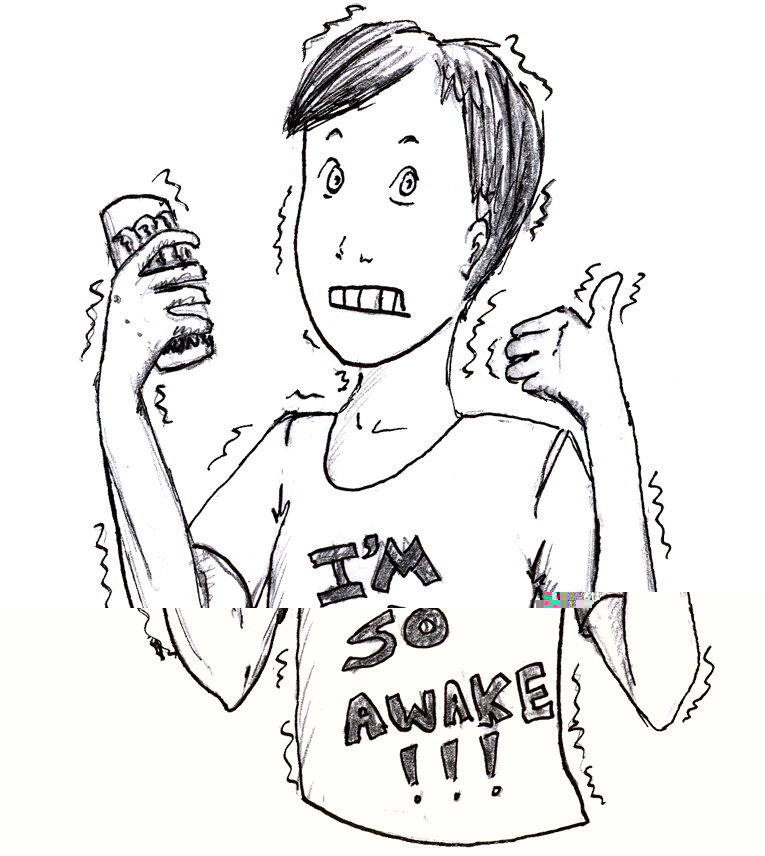 Photo:
Flavoring issues aside, it's a decent pick-me-up if you need a brief energy fix. Though it's not the best companion for an all-nighter, Red Bull will give you just enough of a buzz to help you power through the last couple hours of your busy day.

Something to keep in mind though, Livestrong and Johns Hopkins University reported that a major side effect of drinking Red Bull included irritability. We learned this first hand because when we downed the 'Bull together, we definitely butted heads more than usual.

So now that you know which drinks will help with all-night study sessions and which ones should be avoided, there are a few more things to think about before gulping down an energy elixir. Keep in mind that most energy drinks contain chemically enhanced ingredients that could cause you to be overstimulated depending on your individual reaction which sometimes means you could feel irritable, anxious or sensitive to noise.

Healthier alternatives like coffee, espresso beans or green tea can give you similar energy without the extra chemicals and harmful side effects. Spike has 25,000 per cent of the daily amount of Vitamin B that you need in a day, so you'll be drinking all the Vitamin B you need...for a month. Overdosing on Vitamin B can cause reactions as severe as fainting, nerve/brain damage, jaundice and migraines. Needless to say, sticking with the average cup of joe may give you a less intense energy high, but in the long run it's a lot safer.

Be sure to consume energy drinks responsibly. Follow the recommended dosage and do not try energy drinks if you take any type of medication or have a preexisting heart condition.