The art of Kung Fu is a serious study that takes discipline and effort. Organized crime gangs are intimidating, violent and ruthless groups who have the ability to throw entire cities into chaos. Now what happens when these two subjects come together? Why, you get "Kung Fu Hustle," the funniest film of 2005 so far. 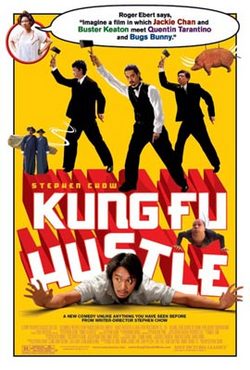 Photo:
As one can imagine, "Kung Fu Hustle" is anything but a typical comedy. Written by, directed by and starring Stephen Chow, the film is even more hilarious, over-the-top and delightfully odd than his last film, "Shaolin Soccer." In order to surpass his past work, Chow uses everything from physical comedy to character gags to make "Kung Fu Hustle" one kicking flick.

Set in China during the 1940s, "Kung Fu Hustle" tells the story of the wired, wannabe bad-boy Sing (Chow), his clueless sidekick (Chi Chung Lam) and their unlikely quest to become members of the dominating "Axe Gang." Assigned by the gang's leader, Brother Sum (Kwok Kuen Chan), to deem themselves worthy of the gang by killing one random person, the duo sets out on completing the task, only to fail numerous times with humorous outcomes. Meanwhile, the "Axe Gang" tries to take over "Pigsty Alley," an impoverished small town, only to be continuously opposed by a formidable pair of an outrageous landlady (Qiu Yuen) and her pushover husband (Wah Yuen). From here, "Kung Fu Hustle" chronicles the hilarious antics that the gang, Sing and his buddy experience in attempting to overcome their dilemmas.

It isn't just the silliness of the story that makes "Kung Fu Hustle" such a riotous laugh fest. The film's characters all have their own humorous traits and actions that provide comedy as the plotline progresses. Also, "Kung Fu Hustle" is full of enough well-timed moments of slapstick, martial-arts spoofs and zany cartoon behavior to make sides split in audiences everywhere.

Just as the humor of "Kung Fu Hustle" makes it a jovial engagement, so its stylishly choreographed fight scenes make the film engaging in other ways. Woo-ping Yuen, who has served as action choreographer for films such as "Kill Bill" and "Crouching Tiger, Hidden Dragon," creates remarkably complex martial-arts scenes that stun as much as they entertain. The fight scenes also contribute to the one-of-a-kind blend of comedy in "Kung Fu Hustle" as well. Some of the film's humorous fight scenes include Sing smashing his enemies' toes to the ground to achieve victory, the landlady of "Pigsty Alley" strategically screaming to defeat her foes and even a man transforming himself into a toad (by using a very special Kung Fu technique, of course).

As comically enrapturing as "Kung Fu Hustle" is, it is not the film to go to if you're seeking depth in your cinematic experience. "Kung Fu Hustle" is a lighthearted thrill ride that succeeds in offering what it is solely responsible for: non-stop guffawing, rather than thought.

Offering an explosively dynamic blend of comedy and action, "Kung Fu Hustle" is a film that's up for the challenge of delivering a really strong and on-target hit to your funny bone.

"Kung Fu Hustle" (95 minutes) is rated R for sequences of strong stylized action and violence. It is in Cantonese and Mandarin with English subtitles and is now playing in theatres everywhere.