Early on, the Lady Blazers fell victim to Clarksburg's decisive passing and strong offense. It took three quarters for Blair to close their defensive holes and more effectively drive the ball down the court to score. At the end of the third quarter, junior guard Adrienne Jackson sparked Blazer aggressiveness with a beautiful 3-pointer. From that point on, the Blazers were on fire, scoring one point after another. 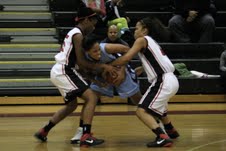 Photo: Lady Blazers fight for posession of the ball during their game against Clarksburg.

Photo: Lady Blazers fight for posession of the ball during their game against Clarksburg.

Head Coach Erin Conley believes that Jackson's 3-pointer in the third quarter helped shift the game in Blair's favor. "It was a change of momentum that we needed," she said.

Blair carried Jackson's intensity into the fourth quarter and fought to retain a one-point lead, 45-44. Clarksburg stepped up their game as well. Both teams were so evenly matched that it seemed the game would end in a tie. But eventually, Blazer offensive strength chipped away at Clarksburg's stonewall defense.

Strong passing kept the ball in Blazer possession, but the Coyotes' skills were evenly matched. The teams ran back and forth on the court until junior guard Morgan Chase rebounded the ball three minutes before the buzzer. The stalemate was broken with Chase scoring and the Blazers finished strong.

Junior point guard Myla Sapp and junior forward Johanna Lopez led the team in scoring and were an essential part of the offense throughout the game. The juniors continually drove the ball down the court with fervor and remained prepared to make the next play. Following their lead, a variety of players scored and powered through Coyote defense.

According to Chase, defensive power also heightened the team's intensity during the game. "When defense stepped up offense did too, this upped the intensity and shows that we work well as a team," she said.

Frequent fouls plagued both teams as a result of Blair's player-to-player defense.

Nonetheless, Conley is proud of the team on starting the season with a win. "I'm most proud of the level on involvement in the game, the scoring from various people and adjusting our plays based on the game," she said. "From here, we're going to work on half-court offense, balance of attacks, layups and shooting. But it's always nice to start the season off with a win."

Myla Sapp is a Staff Writer for Silver Chips Online

The girls' varsity basketball team will play their next home game on Friday, Dec. 10 against Kennedy at 7 p.m.