Petitions for legalizing Lunar New Year being made

Even though the first full moon of the new lunar year was locked behind slate clouds as the snow sifted down in swirls, the Chinese community celebrated the Lantern Festival, the last day in the traditional 15-day celebration of the Lunar New Year, on Feb. 24 by eating dumplings and parading paper lanterns.

The festivities began on Lunar New Year's, which fell on Wednesday, Feb. 9 this year, marking the first new moon in the Chinese year of the Rooster. Lunar New Year's and the 15 days after it, often called the Spring Festival, make up a major holiday in the Chinese culture. The Montgomery County Asian community ushered in this Lunar New Year with cultural concerts at Wootton High School on Jan. 1, the Rockville Civic Center on Jan. 23 and Kentland Church on Feb. 9, providing an opportunity for the community to share ethnic arts, as well as gather support in its petition for the Lunar New Year to become an official county holiday.

Petitioning for a new county holiday

"Lunar New Year's is the most important holiday in Chinese culture,” says Blair's Chinese Club secretary, junior Austin Fang. "Also, there are a lot of people who celebrate [this holiday] in [Montgomery] County.”

Fang admits that he wouldn't mind a day off to celebrate the holiday with his family. "Well, [Chinese New Year's] should be treated the same as Jan. 1, with a day off so we can fully appreciate this time of new beginnings, new resolutions and new goals,” he says, "and I want some time off so I'll be able to spend the day with my family, too.”

Junior Jeff Cao believes that it's only fair to the Chinese community to legalize the holiday. "Jews have Rosh Hashanah off. Asians are as significant a part of the county's population, just like Jews, so why can't we have Chinese New Year's off, too?” he demands.

Non-Asian Blazers, such as freshman Elissa Fischel, would also support an official day off in honor of Lunar New Year's. "I think it would be cool to get a random day off, as long as it doesn't add time on to the end of the year," she decides. "Plus, people who celebrate the Chinese New Year would probably enjoy having the day off to spend time with their families.”

Petitions for legalizing the Lunar New Year were being signed at the concerts, which showcased a glittering spectrum of Asian performance art, including wushu (Chinese martial arts), Chinese Opera, guzheng (Chinese harp) and ethnic dances. Performers varied in age, but whether they were white-haired or rosy-cheeked, flittering across the stage or brandishing shiny blades, everyone was determined to do their best in representing the glory of the Chinese culture. According to the director of the Washington Guzheng Society, Bing Xia, the performers "are all very glad for these chances to show off our culture to our families and our friends, who might not have seen it before. We're especially glad to be doing something nice on an important holiday like the [Lunar] New Year.”

The history of Lunar New Year 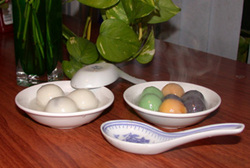 Photo: Multi-colored and multi-flavored yuanxiao taste best steaming hot right out of the pot. Yuanxiao is such an important part of the Spring Festival that the Lantern Festival is also called the Yuanxiao Fest.

Photo: Multi-colored and multi-flavored yuanxiao taste best steaming hot right out of the pot. Yuanxiao is such an important part of the Spring Festival that the Lantern Festival is also called the Yuanxiao Fest.

In China, workers have a paid two-week vacation off for the Lunar New Year celebration, beginning the day before the first new moon. The 15 days between New Year's and the Lantern Festival are one big party after another for many Chinese families, filled with visiting friends and relatives, eating delicious ethnic food and giving presents.

The entire festival is celebrated with paper lanterns of all shapes and sizes, made of colored rice paper and wicker frames. The lanterns are to be lit every night for the entire festival. On the night of the Lantern Festival, children parade their paper lanterns around the neighborhood before finally blowing out the candles, symbolically ending the festivities. People also participate in lighting firecrackers, eating yuanxiao, or round, sticky rice dumplings, and riddle-guessing.

However, for many children, the most important tradition is receiving "red envelopes,” money wrapped in red paper from elders. "What do I look forward to about Chinese New Year's? Well, I look forward to getting the money,” Fang says. "I get a lot of money each year because I have a lot of relatives here in Maryland, and I get about $25 per uncle or aunt.”

Fang and Cao each received around $100 in red-envelope money this Lunar New Year's. In more lucrative years, Cao gets up to $200. Other Asian Blazers have been known to get up to $500 in red envelopes.

This money comes at time of the year when pocket money is in the direst need of replenishment, according to Fang. "[Red envelopes] are really nice because Chinese New Year's, comes right after Christmas and New Year's when you've spent all your money buying gifts for friends,” he explains. 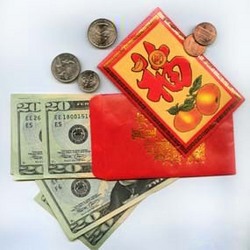 Photo: The two red envelopes are printed with words of greeting and good wishes. The one in front has the character for fortune, Fu, printed in gold on it; the envelope behind wishes the receiver luck in getting far in life ("wan li chang chen").

Photo: The two red envelopes are printed with words of greeting and good wishes. The one in front has the character for fortune, Fu, printed in gold on it; the envelope behind wishes the receiver luck in getting far in life ("wan li chang chen").

Each Lunar New Year begins a year featuring a Chinese zodiac animal. The Chinese zodiac is based on the legend of a grand race that the Emperor of Heaven held for all the animals. The twelve animals that finished the race first were each given the honor of being the symbol of a year, based on the order in which they crossed the finishing line. The clever Rat, who won because he rode on the back of the Ox, jumped off the Ox at the last moment to win the race. Therefore, the Rat begins the 12-year cycle of the Chinese zodiac. He is followed by the Ox, the Tiger, the Rabbit, the Dragon, the Snake, the Horse, the Goat, the Monkey, the Rooster, the Dog and, finally, the Pig. Each zodiac animal has a "personality” that it imparts onto those born in its year. The year 2005 falls on the year of the Rooster, who is hardworking, competent and stylish but a little boastful, according to Chinatoday.com.

Lunar New Year outside of China

The Vietnamese celebrate Tet Nguyen Dan (the Vietnamese Lunar New Year), or Tet, which shares the Chinese zodiac system. Tet is a celebration of renewal within oneself as well as an occasion for the Vietnamese to honor their ancestors and families. All cleaning supplies are to be hidden away until after the second day of the new year, after which a spiritualized cleaning ritual takes place. People sweep the dust from the door of the rooms toward the center, then leave the dirt in the corners until the fourth day of the new year, according to Vietnamtourism.com, which also describes other Tet traditions.

Sophomore Loan Tran, who is Vietnamese, celebrates Tet by "eating spring rolls.” Her father Americanizes the celebrations by making special barbeque chicken on the holiday, but mostly, her family enjoys pho (Vietnamese beef noodles), Banh Tet (a special type of soy cake) and Banh Chung (rice and meat wrapped in banana leaves), which she describes as "pretty different but pretty yummy.”

Even though Tran is also a Catholic who actively participates in Catholic festivities, she believes that her faith doesn't interfere with the traditional celebrations of her culture. She and her family observed Ash Wednesday and Lunar New Year's on the same day. "The two cultures don't clash. I think it really doesn't matter what else you are or that you might not live in the traditional ways of your culture, you can still celebrate a Tet and other traditional cultural holidays,” Tran maintains. "[These traditional holidays] are important to me because they make sure that I remember my culture.”

The Year, parallels and firecrackers

Legend has it that the Year, or Nian, was a fearful monster who had a craving for humans on the first new moon of each year. The Year, with the moonless sky, would go around to each house to pick out its dinner. But the Year had a great phobia for fire and for the color red, a color that combats evil. Therefore, to keep the Year from entering houses, the Chinese bolted doors on New Year's Eve and pasted red paper onto the doors. They lit firecrackers to make noises and sparks to scare the Year far, far away. Over the centuries, firecrackers have became a necessity for Spring Festival celebrations, and the red paper seals have evolved into parallels, or lengths of red paper with two lines of poetry written on them in calligraphy. The Vietnamese, who also partake in this tradition, call this the Cau Doi.

The report of the Three Kitchen Gods

On the last day of each lunar year, the Vietnamese offer gifts to the Tao Quan, or the Three Kitchen Gods, because on that day, supposedly, the Gods, who lived in every kitchen, would go make a year-end report to Ngoc Hoang (the Jade Emperor). The Three Kitchen Gods were mortals who represented Vietnamese ideals of love and marriage and were immortalized after their tragic deaths. According to the Vietnam Style web site, the story of the Tao Quan demonstrates the importance that the Vietnamese place on the desire to protect and please those they love.