March 14, or 3/14, celebrates the Archimedes constant, better known as the notorious pi, by sporting the first three digits with its month and year. As for its other lesser-known digits, at 1:59:26 p.m. today, loud choruses of the irrational number may be heard throughout excited math classrooms. Of course, there are other ways to commemorate pi without memorizing hundreds of its infinite decimals. One way, perhaps the favorite way, is to eat pie. Pie is significant not only because it sounds like the Greek letter pi, but also because it physically embodies the notable constant that represents the ratio between the circumference and the diameter of a perfect circle. But please, no thinking about math is required; only chewing and savoring is absolutely necessary when eating this delightful lemon meringue pie. And, of course, don't forget to swallow. 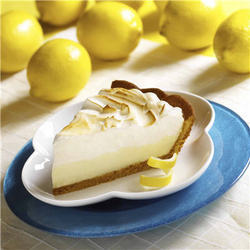 Makes 8 servings
Kitchenware:
-1 medium sized saucepan
-A large bowl for mixing
-Electric mixer
-Nine inch pie pan
-Spatulas and wooden spoons for mixing
Ingredients:
-One pre-made nine inch pie crust
-7 tablespoons cornstarch
-1 tablespoon flour
-1 3/4 cups granulated sugar
-2 cups water, boiling
-4 egg yolks, beaten
-Grated rind of two lemons
-1 tablespoon butter
-1/4 teaspoon salt
-1/2 cup unstrained lemon juice
-5 egg whites
-1/2 teaspoon of cream of tarter
-1/2 cup of granulated sugar
Preparation:
1. Begin by heating the oven to 350 degrees.
2. As the oven heats, put the raw pie crust into the pie pan, making sure to poke holes in the bottom for steam to escape from.
3. When the oven is heated, cook the crust for ten minutes or until it is a golden brown.
4. Boil the water. While the water is boiling, mix together the cornstarch, sugar and flour.
5. Add the water to the powder mixture, mixing until all lumps are gone.
6. Return the mixture to the saucepan and continue to heat.
7. While the water-flour mixture is heating, beat the eggs. Gradually add the eggs to the heating mixture.
8. Once stirred, add the lemon rind, butter, salt and lemon juice.
9. Cook the ingredients for five to ten minutes, until thick. Pour the mixture into the prepared pie crust.
10. Separate the egg whites from the yolks, throwing away the yolks.
11. Add the cream of tarter and, using the electric mixer, beat the egg whites until they become thick and peaked.
12. Once the whites are mixed, after around ten to fifteen minutes, slowly add the sugar, one tablespoon at a time, until the meringue is thick and creates peaks.
13. Cover the pie crust with the lemon filling with the meringue, sealing the pie and smoothing meringue.
14. Cook the pie for five to ten minutes at 400 degrees or until the tips of the meringue are brown.
15. Allow to cook completely before enjoying. For an extra touch, arrange strips of pie crust on the top in the shape of Pi.

Julie Zhu. Despite her innocent appearance, Julie Zhu is a demon at heart. She enjoys fire breathing, serial commas, (,!) and eating the remains of art staffers. Warning: Don't be surprised if you see her busting a move in the 260s hallway. More »