Making it as a male cheerleader

Men as the minority

Lurking in the back row of the formation are three striking characters wearing shorts instead of skirts. But looking past the glaring discrepancy in dress code, one notices a bigger difference between back row occupants and the rest of the team: they are male. 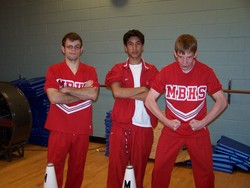 Photo: James Gillette, Anton Do and Casey Wallis are the three male cheerleaders this season.

Photo: James Gillette, Anton Do and Casey Wallis are the three male cheerleaders this season.

In a culture where males are often ridiculed for crossing gender boundaries, three male cheerleaders, senior James Gillette, sophomore Anton Do and sophomore Casey Wallis, are taking a risk at Blair for a variety of reasons. Do wanted to master back-flips, Wallis wanted to stay in shape and Gillette did not say no when approached.

Gillette, Do and Wallis are not the first male cheerleaders on Blair's squad. According to co-coach Roxanne Fus, boys helped the team place third in the 1995-1996 school year Montgomery County Cheerleading Competition. Senior James Gillette was also on the team last year, but only participated during basketball season after being injured in a car accident. This year, not only is he fully recovered, but he is no longer alone since Do and Wallis joined the team.

Between four and seven percent of the 3.25 million college cheerleaders in the US are male, making Gillette, Do and Wallis in the clear minority, according to a 2002 article published by Observer Sport Monthly. 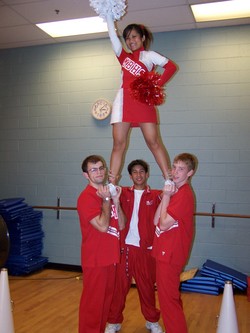 Photo: The male cheerleader's strength helps the cheerleaders perform more complicated stunts. Here they demonstrate an example of a basic one deck stunt.

Photo: The male cheerleader's strength helps the cheerleaders perform more complicated stunts. Here they demonstrate an example of a basic one deck stunt.

Wallis recalls being "very uncomfortable" and acutely aware of his gender when trying out for the team. "Being in a room with over 60 girls [as] one of the only guys and [having] to do the things the girls do and feel un-masculine" was an awkward situation for Wallis.

Going head-to-head with the girls

Once practices starts, the girls are all about business. "We're pretty much nothing once we enter the dance room. We're just tools," Wallis says.

The boys are cooperative team-players when it comes to cheering. "They will do whatever we ask of them," says Fus. "They are great."

Although the boys do not need to dance or know all the moves, they have to learn the cheers. According to team member sophomore Morgan Nixon, the boys are not the best at cheering. She complains that they "clap off beat."

Do, however, is confident and feels he can match the girls step for step. "I can do whatever they can do, or better," says Do. Gillette disagrees; there are some things he simply refuses to do.

"I'll always have a problem doing splits," says Gillette. "[You're] never gonna catch me popping my [butt] like they do. It's just not gonna happen."

Sometimes the boys use megaphones and cheer with the girls, but for the most part they do stunting. This includes acrobatic moves such as back-flips, which co-coach Fillman McLean is teaching Do and Wallis, tossing girls and holding a flier.

McLean, who has been cheering since the age of ten, says that the strength required for some routines has forced cheerleading to evolve beyond "just a girl sport." The boys' muscles have been a welcome addition to the squad, though Fus contests that some of the girls can hold up a teammate just as well as the boys.

Suiting up comes with stereotypes

At the beginning of last season, after five years of coaching the cheerleading squad, Fus encountered herself faced with a challenge: a male cheerleader. Although Gillette, the newest member of the squad at the time, joined because of a joke by wrestling team managers, he quickly became a dedicated team member.

At first, Fus was concerned that Gillette would face harassment and catcalls. Her anxieties proved unnecessary, since most Blazers were open-minded about Gillette's participation. "I'm really proud of the Blair community, I was worried about my guys," reflects Fus. She says that if insults are being uttered, "at least people aren't shouting [them]."

Gillette, on the other hand, is less certain that the civility he is afforded is due to acceptance. "I wrestle and I'm a big guy, so [no one] says it to my face," Gillette says.

Do and Wallis, on the other hand, say that they have been taunted. "People make fun of you all the time," says Wallis.

Blair Resource Counselor Marcia Johnson feels that taunting will not necessarily affect the boys. "I think if it's something they really want to do, they'll be fine with it, though it depends on the person," Johnson notes.

Regardless of any teasing, all three of the boys say they do not take any negative comments to heart. They have the encouragement of family and friends, most of whom tease the guys in jest. "My parents thought it was a really good idea because it got me out of the house," laughs Wallis.

All three of the boys claim that the most common misconception about male cheerleaders is that they are all homosexual. At one football game, a male cheerleader on the opposing team's squad even hit on Gillette. Teammate and senior co-captain of the squad Jen Nguyen affirms that the stereotype is a common one. Nguyen notices that people often ask her, "What are they, gay?"

(Not a) gender bender

Despite the stigma associated with male cheerleaders, having guys on the team has not upset team chemistry.

The cheerleaders often have bonding activities, such as sleepovers, which Fus knows will not be a problem because of adult supervision. However, having a multi-gender squad has raised minor problems. "I just had to speak to the guys and tell them that they couldn't stand around in their boxer shorts," explains Fus.

"Everybody is really comfortable with everybody else," Fus states.

Do might be comfortable with the girls, but he does not necessarily understand them. "I know just as much about girls as before I joined. Which is not much," Do muses.

Wallis does not worry about understanding the girls. He gets along well with his female teammates and attests to their mutual camaraderie. He says they are "fun to be with and fun to hang around." He adds, "even after practice we'll still chill."

Nixon is similarly appreciative of the guys. She attests that Gillette, Do and Wallis are "always around to entertain us." Perhaps the guys' biggest fans are their female counterparts, who enjoy having the guys with them. "They really add to the squad because they bring not only their strength but also their humor and a good attitude," says senior co-captain JoAnne Rogers.