Maryland earns a "B+" for education

Education Week gave the Maryland public school system a "B+" grade for its overall 2009-2010 policy and performance on Jan. 11. The grade was the highest in the country, compared to the national average score of a "C," according to an Education Week press release.

Education Week is a leading U.S. newspaper concentrating on K-12 education. Maryland's grade comes from the 2011 edition of Education Week's "Quality Counts," an annual report card that assesses the school systems of every state across the nation. The grades are based on an in depth analysis of the six categories of chance for success, K-12 achievement, transitions and alignment, school finance, standards accounts and accessibility, and teaching, according to Editorial Projects in Education Staff Research Associate Kacy Sellers. 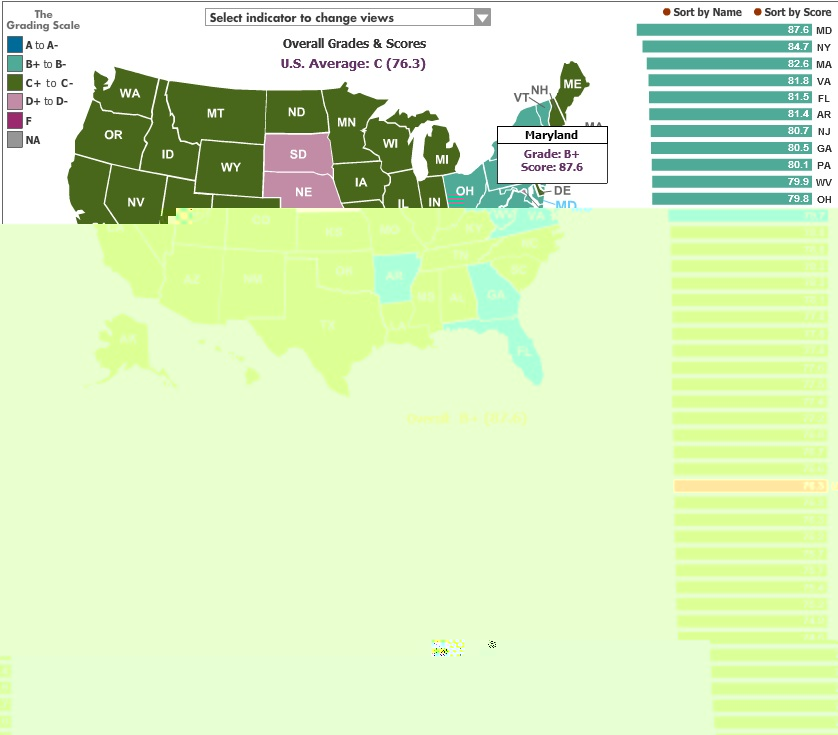 Photo:
Maryland's "Quality Counts" rating serves as a positive indicator of the high standards set for both students and teachers statewide, according to the Maryland State Department of Education (MSDE) Media Relations Director William Reinhard. "[The rating] shows fairly consistent excellence across the state; we have good school systems in every corner of Maryland and I think a lot of it stems from outstanding teachers and outstanding students," Reinhard said.

Maryland's' "A" in the transitions and alignment category in particular influenced its high rating, according to Editorial Projects Senior Research Associate Sterling Lloyd. "Maryland had the highest grade in our 'transitions and alignment' policy section. It got credit for the 13/14 policies that we track, so that really boosted its grade," Lloyd said.

Maryland education officials are going to continue working towards closing the achievement gap between socioeconomic classes to improve the quality of education for students. "[We want to improve] in closing the achievement gap between certain student subgroups and it's something we've been working on. Certainly Maryland has a ways to go, but so does every other state," Reinhard said.

In order for the nation's education rating to go up, states need to work on providing extra support to teachers and cracking down on the policies that are already in place, according to Lloyd. "The first thing is that states have to consider a broad and aggressive policy agenda that will focus on teaching and learning, and provide educators with the support that they need," he said.