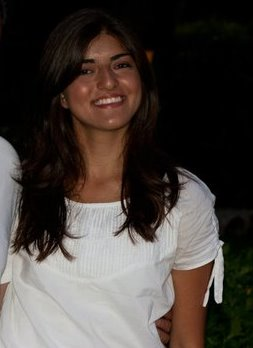 Name: Melodi Anahtar
Position: Editor-in-Chief
Graduation Year: 2012
Melodi Anahtar loves anything having to do with science, music or TV. Her favorite vacation spot is the Dominican Republic and her favorite city is Boston (go Red Sox). She can usually be found wasting time in her room, either watching "Grey's Anatomy" or reading "Wired".

LMFAO: Not sorry for party rocking

LMFAO - the neon-clad uncle-nephew duo behind "Party Rock" and "Sexy and I Know It" - brought its ridiculous fun to Fairfax, VA, on June 25, with a crew of back up dancers, inflatable toys and over-the-top theatrics. With one club beat blending into the next, the music wasn't all that memorable, but the two certainly knew how to put on a show and made for a entertaining night.

snoWatch: Three feet of snow is on its way

Yes, the Snow Gods are finally smiling upon us. And with this magnificant news, snoWatch is officially back.

A senior Blazer was stabbed in the parking lot of Northwood High School at 9:06 p.m. on Tuesday, after attending the Northwood v. Kennedy High School boys' basketball game. She is currently recuperating from the attack.

Several AP curriculums to be redesigned

College Board will implement curriculum revisions for several of its Advanced Placement (AP) classes over the next three years.

It's an unseasonably cold spring night as the girls' lacrosse team takes the field for its home opener. Junior center Rachel Smith slashes to the net and scores within the first two minutes of the opening whistle, giving the Blazers the momentum en route to their first win of the season.

Girls' lacrosse gets stung by Hornets

The girls' varsity lacrosse team (4-7) suffered a tough loss at the hands of the nearly undefeated Damascus Hornets (10-2) with a final score of 15-2.

Superhero movies are characterized by their nonstop action, out of this world graphics, classic plots and overarching moral lessons. "Thor" has all of these, and is even in 3-D, but it is still missing something.

The ladies' varsity lacrosse team (3-6) secured a solid victory over the Magruder Colonels (1-6), resulting in a triumphant senior night.

The girls' varsity lacrosse team (2-5) lost to the Richard Montgomery (RM) Rockets (4-3) by a close score of 17-14. Despite the fact that the Blazers were able to get a four point lead in the second half, they were unable to maintain it due to a momentum shift in RM's play.

McKenney Hills Elementary to open in 2012

McKenney Hills Elementary School in Silver Spring will open in August 2012 and construction is currently underway. The school is supposed to lessen the overcrowding at Oakland Terrace and other elementary schools in the area.

Maryland State Superintendent of Schools to retire in June

Maryland State Superintendent of Schools Nancy Grasmick, 72, announced her retirement on March 30 after serving in the position for nearly 20 years. Her last day as superintendent will be June 30, according to Maryland State Department of Education (MSDE) Media Relations Director William Reinhard. The Maryland Board of Education is responsible for appointing her replacement but has not selected anyone yet.

April Playlist: Music to play on a rainy day

Everyone knows that April showers bring May flowers, but let's face it. The constant rain is a drag because anything worth doing is outside the confines of our houses. After all, you can only spend so much time on Facebook before you feel like a complete creep.

After a consistently tight game, the girls' varsity lacrosse team (2-2) was able to beat the Springbrook Blue Devils (1-3) by one goal for a final score of 8-7.

The varsity girls' lacrosse team (1-1) defeated the Kennedy Cavaliers (0-2) by a score of 19-4 in their home opener on Thursday.

For junior Becky Vanarsdall, curling is more than a game – it is a commitment. Vanarsdall most recently participated in the U.S. Curling Junior National Championships in Fairbanks, Alaska from Jan. 29 - Feb. 5.

The Montgomery County Council is deciding whether to replace Pepco due to unreliable service that the company has provided for the past few years.

Every year, the Grammy Awards takes place to entertain millions of music fans across the country. From unexpected wins to questionable performances, this year's Grammys was a night to remember.

A movie that just goes with it

It was only a matter of time before Jennifer Aniston and Adam Sandler starred in the same movie. Yet their inevitable collaboration has produced merely a standard romantic comedy.

The Blair varsity poms squad came in second place at the Division III competition held at Northwest on Saturday.

Each time I've visited the counseling office this week, it has been filled with students sitting outside of their counselors' office with a pink schedule change slip in hand.

The film has decent actors, a superhero plot, special effects and it is in 3-D. Yet, it is missing a crucial component.

Maryland earns a "B+" for education

Education Week gave the Maryland public school system a "B+" grade for its overall 2009-2010 policy and performance on Jan. 11.

The unofficial guide to "Guid-ism"

Tonight may be better than Christmas. Tonight, the critically acclaimed, sacred media darling that is "Jersey Shore” returns to airwaves after months of agonizing waiting.

The green light to write

Imagine writing a book that tops the New York Times Best Seller list and receiving a flood of emails from raving fans. Imagine having to juggle sold-out book tours with television interviews.

On Dec. 17, President Obama signed a bill to extend the current polices of the Washington Metro Area Transit Authority (Metro) SmartBenefits program through 2011.

For the past few decades in Montgomery County, there has been a ban on buying alcohol on Sundays.

A need for a referee

Just a few months ago, the Fédération Internationale de Football Association (FIFA) World Cup was all that anybody could talk about. The spirit of unity that came with the tournament was fleeting; the minute the World Cup ended, the competition to become the next host country started heating up.

On Oct. 19, MCPS was named a finalist for the Eli and Edythe Broad Prize for Urban Education.

Stop-and-go on the Boulevard

Every day, the end of fifth period lunch signals the start of yet another terrifying trek down Blair Boulevard.

"Wall Street: Money Never Sleeps" may not be getting the same response as the 1987 original, but fine acting and skillfully composed shots make the movie worth seeing.

Blair's music department is dealing with a lack of funding this year after Montgomery County Public Schools (MCPS) made several budget cuts.

SCO's personal pop culture pundits are here to break down the new shows with the most buzz. Get your remotes ready. Get your couch potato sweat pants set. Go!

Vapiano, the reinvention of Italiano

One of Bethesda's newest additions, Vapiano, is guaranteed to get noticed. Its fresh feel, "green" design, reasonably priced food and innovative concept have made the franchise's first Maryland location a hit.

Costco to come to Wheaton Mall

County spokesperson Patrick Lacefield announced in July that a Costco warehouse will open at the Westfield Wheaton Mall.

In late 1983 Apple released a commercial where it attacked the "Big Brother" government, an idea sensationalized by the novel 1984.

"The Other Guys" combines the traditional buddy-cop theme, a fair share of action, an underdog story and a corporate America setting into one summer hit that is first and foremost a comedy.

LMFAO performs at the Patriot Center in Fairfax.

After a solid performance, Blair's poms placed second at the day's competition and earned a trophy for their performance.

Blair's poms squad was full of energy from the get-go, jumping and dancing to their music.

A crowd began to form at the rink as the Blair hockey team warmed up and the celebration got underway.

Norma Rahim poses with a guitar used in the Guitar 1 and 2 classes.

The Ravioli Ricota E Spinaci is a ravioli with spinach, ricotta filling, and tomato sauce. $10.95

The Bruschetta is a great appetizer that is made of roasted Ciabatta bread, tomatoes, garlic, basil and olive oil. $3.95

The murals above the stations are featured at each restaurant and provide some form of entertainment to customers waiting in line to get their food.