The green light to write

Blazers dream of becoming writers and publishing their work

Imagine writing a book that tops the New York Times Best Seller list and receiving a flood of emails from raving fans. Imagine having to juggle sold-out book tours with television interviews. Now snap back to reality and stare at the empty computer screen, which bears only the title of this future literary masterpiece and a name underneath.

For future writers, this dream world is just that - a dream. Getting published is a difficult, multistep process. Cheryl Klein, Senior Editor at Arthur A. Levine Books, notes that even if a piece of work gets picked up, the publishing process is tedious. "Depending on the quality of the manuscript and the state [of the manuscript], it can take three months to a year," she says. Much more time passes for production before the book is actually published, and even if one were to opt for self-publishing, the prices would be steep. Nevertheless, some Blazers are trying gain writing experience now in order to become prominent authors later. 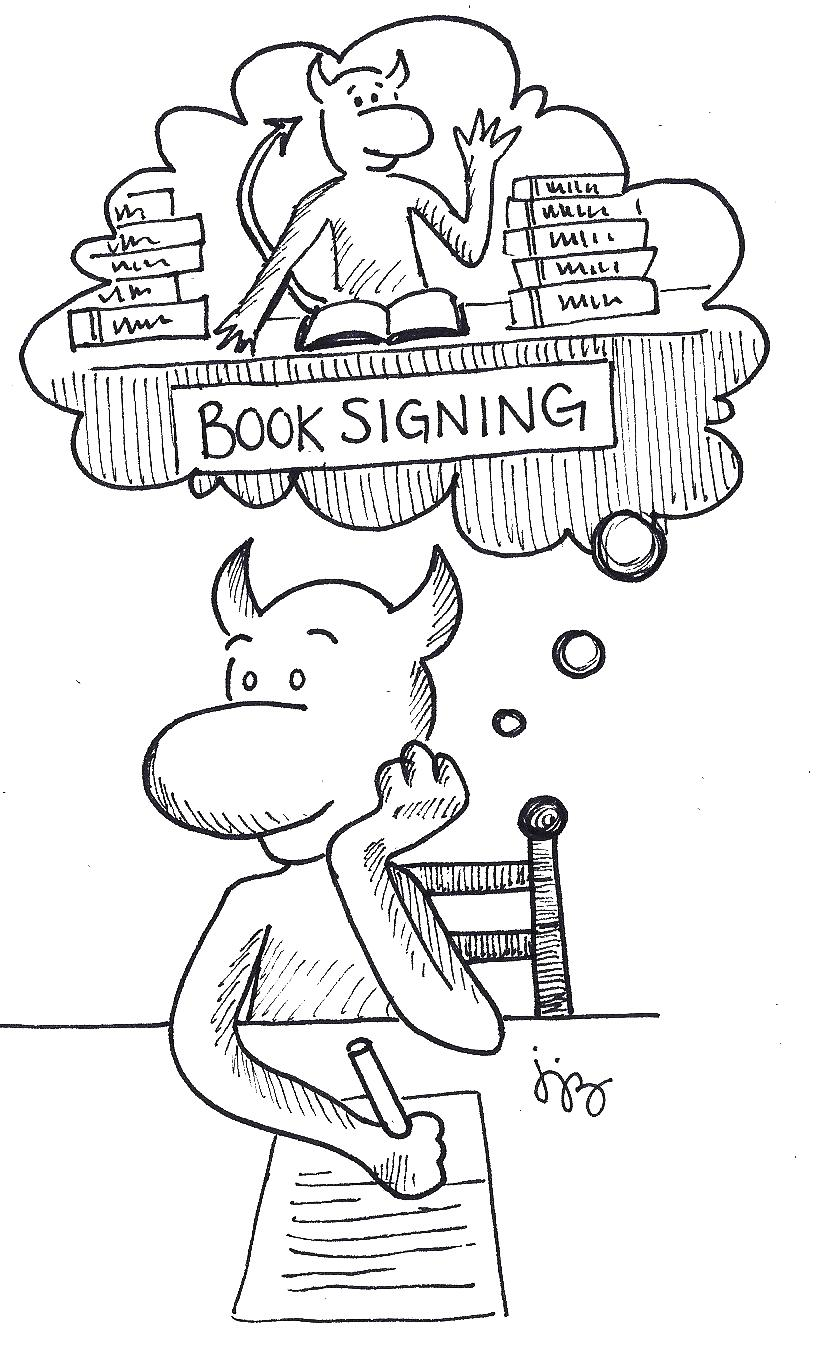 Photo: Many writers dream of one day publishing their stories and becoming masters of their craft.

Photo: Many writers dream of one day publishing their stories and becoming masters of their craft. Photo courtesy of Janet Zhu.

Some writers at Blair, like senior Talia Mason, have already been published. In her sophomore year after her Advanced Placement (AP) National, State and Local Government teacher Lansing Freeman told his classes about a poetry competition, Mason decided to enter one of her pieces. She submitted a poem online and found out that it had been selected to be published in "Something Deeper Happened," a book that was given to President Obama for his birthday and is currently available on Amazon.com.

The experience jump-started Mason's future literary endeavors. "I definitely think that being published has helped me. I never had the confidence before to write about what I was feeling, and now I know that I can actively pursue writing in a more formal setting," Mason says.

But competitions are not the only way into the publishing arena; many different writing classes are offered at Blair. Some students enrolled in these classes, like senior Olivia Kibbe as well as Mason, know which genre they want to write about in the future. Others, like senior Hannah Felperin and sophomore Rachel Mussenden, know that they enjoy writing, but are not quite sure if they are ready to limit themselves as writers.

Mussenden is interested in writing poetry and novels, and has started writing many stories that she has yet to finish. As a sophomore, she has already looked into self-publishing some of her poetry, but is still unsure whether she wants to pursue writing as a full time career. "I would want to become an author on the side of something, most likely teaching. I'd probably want to teach high school or college," Mussenden says. 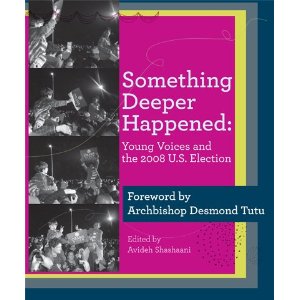 Photo: "Something Deeper Happened" is a book that features a poem by Blazer Talia Mason and was given to President Obama for his birthday.

Photo: "Something Deeper Happened" is a book that features a poem by Blazer Talia Mason and was given to President Obama for his birthday. Photo courtesy of Amazon.com.

While Mason shares this feeling of uncertainty about becoming an author, she feels comfortable knowing that writing will be a constant in her life, even if it is simply a hobby. "The future is certainly looming above me as a senior in high school, but my plans in terms of my writing and my progress are pretty abstract, and I like it that way!" Mason says.

Kibbe, however, seems determined to become an author. She knows that she may not be able to start off her career right away with independent work. "I'd actually much rather start out publishing novels, but I've realized that it probably isn't realistic," she says. But she is open to forms of "gateway writing" that will help her get her feet off the ground. "I am not opposed to writing for TV or movies," she says.

Getting a head start

Ultimately, Kibbe intends to publish her own material. She is currently working on a novel and has set a goal to finish it by the end of the year. In addition, she has already started looking for agents, and even found one in her genre of fiction while looking at a list of available agents in Writer's Digest. "I looked through the list and made notes of several agents that seemed to be looking for things that I currently write, and, more importantly, would be writing in the future,” Kibbe says.

Kibbe is also looking to major in English with a concentration on creative writing in college. Klein does not believe that it is essential to go to creative classes, but does agree that they are helpful because they help aspiring authors get in the habit of writing. "[Classes are] good because they offer discipline and force you to actually write, and they offer a place to get feedback on work," she says.

Having life experience is also an important part of becoming a good writer, according to Klein. "Interesting people write interesting books," she says. But while life experience can help contribute to intriguing work, young authors will get the recognition they deserve if they are skilled, according to Kerri Schlottman, the director of external relations at the Young Alliance for Young Arists & Writers. "Writers at any age are taken seriously if they're very talented," Schlottman says.

In writing, like in every line of work, there are challenges that are especially difficult to overcome. In writing, these obstacles are motivation and criticism, and both are tough for writers of all ages, according to Klein and Schlottman.

Photo: Student produced magazines, such as this past issue of Blair's Silver Quill, allow students to get their poetry, creative stories and photography published at a local level.

Photo: Student produced magazines, such as this past issue of Blair's Silver Quill, allow students to get their poetry, creative stories and photography published at a local level. Photo courtesy of SilverQuill .

Felperin, for example, knows that she does not want to start writing if she feels uninspired. "I don't want to force myself to write," she says. But regardless of mentality, writing a novel takes a lot of hard work, editing and self-pushing. Though, it becomes easier after a head start. "The real motivation comes once you have three or four pages written and you're no longer staring at a blank page," Schlottman says.

While writing, criticism is still very much in the back of author's minds. There is both a positive and negative side to critique, and both are equally important factors to creating quality material; "You never want someone to not like something you do," Mussenden says. But these determined Blazers release that the negative responses are not enough to deter them from trying. "For every person who absolutely loves your book, there's going to be somebody that hates it," Kibbe says.

Consequently, to help generate positive responses, authors always turn to others to read, edit and critique. Before submitting a contest entry for Writer's Digest Popular Fiction Awards this year, Kibbe had two teachers proofread her work. But Mason thinks that she can never truly finish editing her poems. "I've been re-editing pieces I wrote freshman year, and I feel as though that's the way I will always be with my writing," Mason says.

A different way for young writers to get feedback without turning to their teachers or friends is by finding a critique group, which is a group of other writers who will read the book and tell its strengths and weaknesses. "An open dialogue about what works and doesn't work in your manuscript can be an extremely rewarding process to making your novel the absolute best it can be," Schlottman says.

For Blair's future literary scholars there is a long road ahead, but it is important to remember that even now, they have a story to tell.