Maryland State Superintendent of Schools to retire in June

Maryland State Superintendent of Schools Nancy Grasmick announced her retirement on March 30 after serving in the position for nearly 20 years. Her last day as superintendent will be June 30, according to Maryland State Department of Education (MSDE) Media Relations Director William Reinhard. The Maryland Board of Education is responsible for appointing her replacement but has not selected anyone yet. 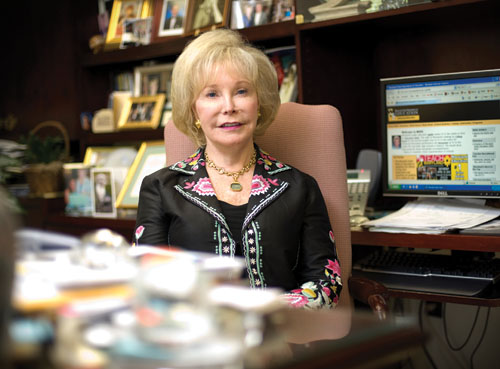 Photo: Nancy Grasmick has acted as the state's superintendent since 1991.

Photo: Nancy Grasmick has acted as the state's superintendent since 1991. Photo courtesy of Honolulu magazine .

Grasmick, 72, has been the superintendent of Maryland schools since September 1991 and holds the title as the longest-serving appointed chief in the nation, according to a press release by the MSDE. After many years in office, Grasmick felt it was time to step down, according to Reinhard. "After 20 years on the job, she thought it'd be a good time to pass the torch on to somebody else," he said. "She wanted to go now, she certainly deserves it."

Grasmick is proud of the progress that has been made in the state's education and found her job rewarding. "In general, Maryland education has become recognized as the nation's leader in public education," she said. "I believe that our state's strong policies and the support they have engendered made that happen.”

One of Grasmick's top priorities was raising test scores across the state and improving Maryland's national ranking, according to Maryland State Senate President Thomas Miller. "She has emphasized test scores. There's an actual road map of how well [Maryland] students have achieved nationally," he said. In addition, Grasmick created the "Blue Ribbon Program," which recognizes schools that show improvement and achievement, according to Miller.

This national success was evident this past year by Education Week, which recognized the state's education system as the best in the nation and cited Maryland students' Advanced Placement (AP) performance as superior to the rest of the country. Last summer the U.S. Department of Education granted Maryland $250 million for the "Race to the Top" program, which provides money to schools and helps give them qualified teachers and principals.

Miller believes that throughout her term, Grasmick was not only able to improve Maryland's national recognition through her devotion to educational programs and test scores, but was also an important source of motivation for local education workers. "[Her term has] obviously [affected] our national rankings, but more than that she's instilled the pride and confidence in not just the classroom teachers but the superintendents at the county level, so they know that they have a supporter in Annapolis," Miller said.

Grasmick also spearheaded childhood development programs and acted as a source of inspiration for educators throughout other states. "When we started looking at kindergarten readiness 10 years ago, it was considered radical," she said. "That's no longer true, as more states are following our lead."

Grasmick plans to continue to work on education after her retirement. "While my interests are varied, they all involve helping children succeed," she said. "I don't plan on leaving the field."