Maybe you did not know it but apparently poaching is a big problem in Maryland. If you were to purchase a fishing license you would receive a Maryland fisherman guide which has an entire panel dedicated to catching poachers, people who fish without a license. According to the pamphlet, "poaching deprives the public of opportunity to use and enjoy Maryland's natural resources." The Catch a Poacher Program even provides an 800 number so people can report any possible poaching. The program also provides cash awards to anyone with information leading to the arrest of a poacher. 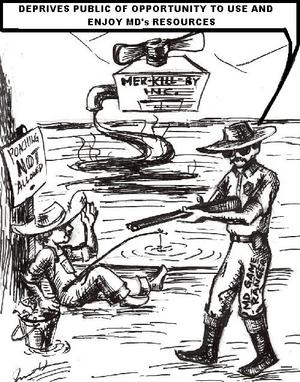 Photo:
If you look in the bottom corner of another panel there is a warning, which states that you should not eat most of the fish that you catch due to mercury contamination. These fish have essentially become poisonous due to the amount of mercury in their bodies. This mercury contamination has lead just about every state to have a fish advisory, stating that people should limit their consumption of fish. Obviously there is a health risk; unfortunately, not enough is being done to prevent it.

The one attempt at limiting mercury contamination in the water is the EPA's very weak Clean Air Mercury Rule. It is so weak, that nine states, not including Maryland, filed a lawsuit against the EPA concerning the new Clean Air Mercury Rule, which attempts to reduce mercury emissions from coal-fired power plants. According to these nine states, the new EPA rule does not do nearly enough to keep mercury, a toxin, from severely damaging our environment and our health.

According to the EPA, coal-fired power plants in the U.S. emit about 48 tons of mercury into the air each year. Although concentrations of mercury in the air are generally low, atmospheric mercury falls to the Earth through precipitation, entering bodies of water where it can transform into methylmercury, which builds up in fish tissue. Eating these contaminated fish is the biggest cause of Americans' exposure to methylmercury, which is highly dangerous to our health. Due to such a large population of contaminated fish, there are mercury advisories in practically every state recommending that people eat no more than one fish per week because overexposure to the chemical is a serious health hazard. The damaging effects of mercury apply particularly to women of childbearing age because of what the toxin does to a developing fetus. A child who is exposed to methylmercury prior to birth can experience brain damage. According to a 2004 EPA study one in six women have dangerous levels of mercury in their bodies so that 630,000 children born each year are at risk.

Though the Clean Air Mercury Rule will help to reduce the amount of airborne mercury, it will not do so quickly enough. The first phase of the plan will not begin until 2010, initially reducing mercury emissions by 10 tons in eight years. In 2018 phase two will begin in which mercury emissions will be further reduced to 15 tons annually upon full implementation. Until the plan starts five years from now there is no push to reduce mercury emissions at all.

To execute this plan the EPA will set a pollution limit for each state, which will place a cap on emissions for their power plants. If a plant exceeds its emissions cap it can buy pollution credits from plants that emit less mercury than they are allowed. This leaves room for some of the biggest polluters to actually pollute even more. And while the condition overall will improve, there will be pockets of heavy mercury contamination that can severely harm your health.

Maryland should refocus its priorities from the Catch a Poacher Program and instate a Catch a Polluter Program that will actually do something to allow the public to truly enjoy Maryland's natural resources.