How the women's bracket fared for the Terps

March Madness, one side of the tournament has coverage for every game, millions of viewers and followers who make their own brackets and follow along. However, many people forget that there is another side to the madness, the women's side. Though the hometown men disappointed with a first round loss to Xavier, the dominant University of Maryland (UMD) women have fared much better, coasting their way into the Sweet 16.

The UMD women have been dominant all season long, suffering only two losses in the regular season to the undefeated and four-time national championship team from the University of Connecticut and a talented Ohio State team. Coming into the tournament the Terps averaged 89.3 points a game, one of the highest averages in the country. Despite being the Big 10 tournament champion, the highest scoring team in the nation with only two losses, the Maryland women's' team received a three seed in the NCAA tournament bracket, in the same bracket as the aforementioned University of Connecticut Huskies, who have won over 100 straight games (yes, ONE HUNDRED). "It's disappointing because we felt like we controlled our destiny, and what we did was win and so to go 30-2, to be ranked top four in the country, I'm not sure I've seen from the men's or the women's side a team ranked top four in the country and receive a 3-seed," coach Brenda Freese said to the Baltimore Sun . The seeding would leave the Terps with a hard road to the finals. 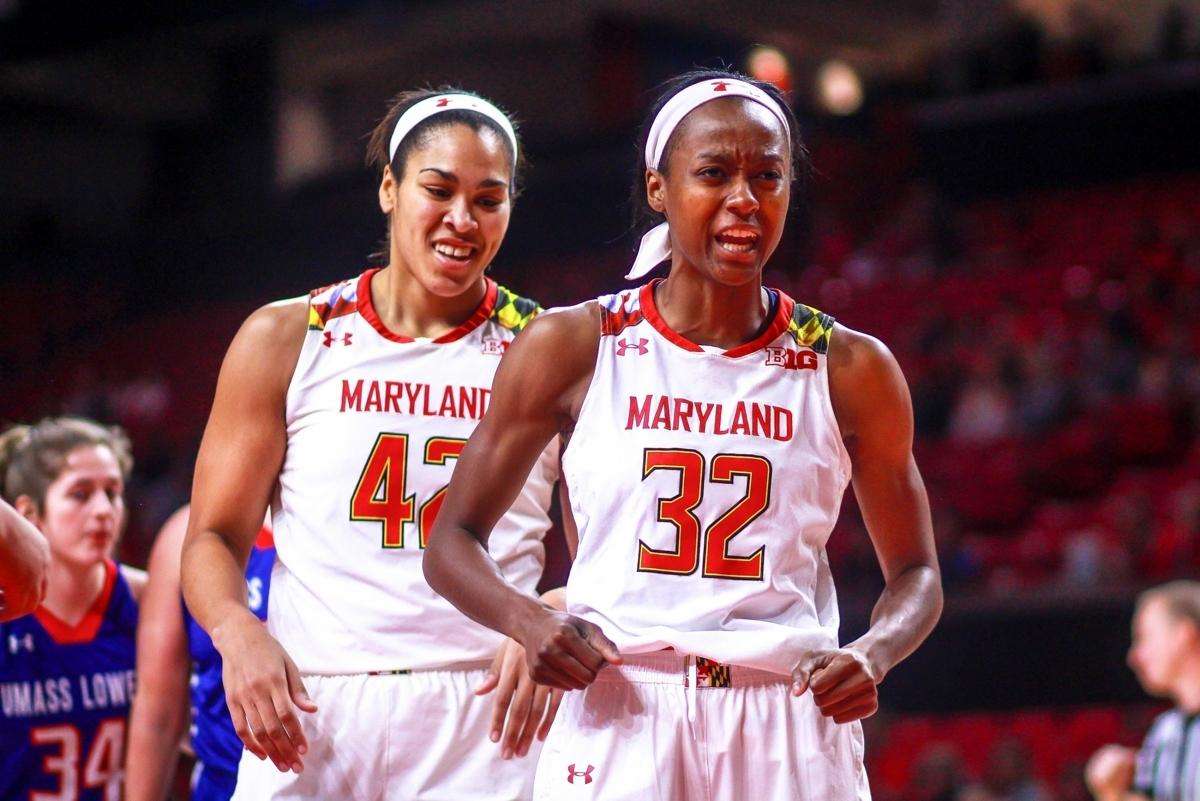 Photo: Seniors Shatori Walker-Kimbrough (32) and Brionna Jones (42) were the leading forces behind a great season for the Terps.

Photo: Seniors Shatori Walker-Kimbrough (32) and Brionna Jones (42) were the leading forces behind a great season for the Terps.

Lead by seniors Shatori Walker-Kimbrough and Brionna Jones, who averaged 19 and 20 points respectively, the Terps cruised through the first round game against Bucknell beating them 103-61, with a stunning 42 point win. In the second round the Terps faced off against West Virginia (WVU) and though they started off slow, they beat WVU by 27 points aided by a three quarter court shot by freshman Destiny Slocum.

In the Sweet 16, the Terps faced off against the 10 seed Oregon who had already upset two teams before. Though Oregon was the underdog they came out strong and rattled Maryland early in the game. They were able to slow the pace of the game down, which stopped Maryland's full court game. The Terps were never able to settle into the game and ended up losing the game 63-77.

Though the Terps fell short and lost their chance to face off against UConn for a second time, they still have plenty to be proud about. They played a strong season and made it to the Sweet 16 a major accomplishment for any team. Brionna Jones and Shatori Walker- Kimbrough were able to end their careers on an amazing season and to cap it off they were names to the first and third AP all American team. Even though the Terps fell short this year, they have dynamic underclassmen who are sure to lead them to another successful season next year and deserve as much as recognition as and more recognition than the men's team for their accomplishments.