MCPS: Not Lead-ing the way

The level of action for lead in water in MCPS must be lowered to prevent lead poisoning.

In the early twentieth century, Benjamin Franklin suggested removing lead pipes in order to reduce illness and disease in children. By 1977, extensive research had proven its toxicity. Yet at that time, 12,000 to 16,000 people per year still suffered from lead poisoning, even though many of those cases were already preventable. With 40 years of additional research showing the clear negative impacts of lead, why is any measurable concentration of lead still deemed acceptable in our drinking water?

An elevated lead level is defined by Maryland law as 20 parts per billion (ppb) or above, as recommended by the Environmental Protection Agency (EPA). Montgomery County Public Schools (MCPS) operates under the same standard, shutting off water sources only when lead levels exceed 20 ppb.

In June of 2017, Maryland lawmakers enacted a law that mandated testing for lead levels in water in all schools to be completed by June 2018 with full results accessible online. On March 16, WTOP reported that 21 schools in MCPS had been tested and 12 schools had come back with elevated lead levels in at least one water source. As of April 19, 63 out of 208 schools had been tested, and only 12 schools in total had shown elevated lead levels.

According to Dr. Laura Anderko, Director of the Mid-Atlantic Center for Children's Health and the Environment, ingestion of lead can be detrimental to people's physiological and mental health and is a serious concern for children under the age of 18. "Lead is of concern because its a neurotoxin which attacks the nervous system. Depending on how much the child takes, it can impact growth and development, the child's ability to learn, and has been linked with violence and emotional and mental health issues," she says.

Out of the 12 schools that have lead levels above the MCPS limit, 10 are in the Down County Consortium (DCC). Compared to the rest of the county, the DCC houses more low income students, and in DCC high schools the average rate of students on Free and Reduced Meal (FARM) plans exceeds 50 percent. The remaining two elementary schools outside the DCC both have FARM rates of at least 80 percent. 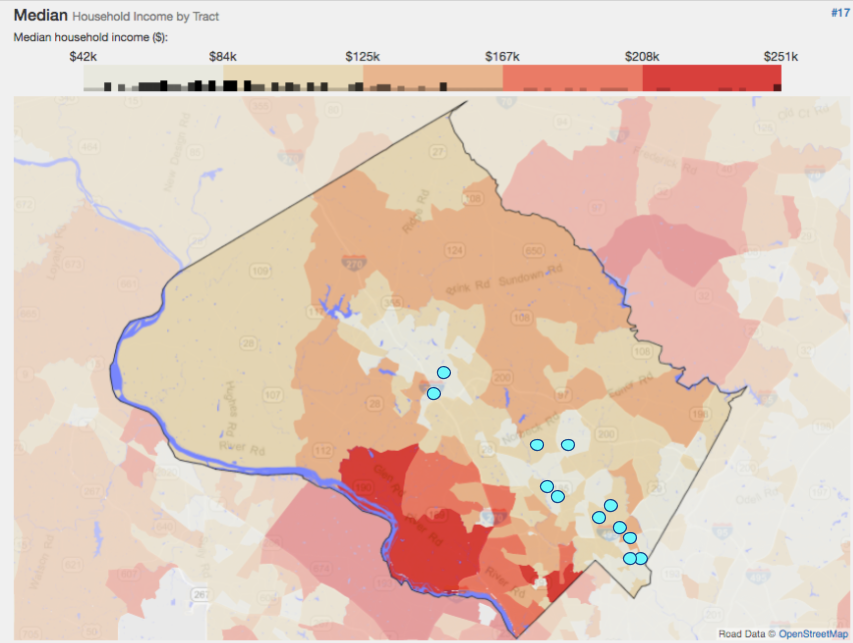 Photo: Schools with elevated lead levels are found mainly in the lower income parts of the county, with 10 out of 12 in the Down County Consortium.

Photo: Schools with elevated lead levels are found mainly in the lower income parts of the county, with 10 out of 12 in the Down County Consortium. Photo courtesy of Rebecca Wessel and Road Data.

As explained in the reports issued following all lead testing, the lead in the water most likely comes from brass piping or lead-containing solder, a material used to fuse pieces of metal together. In 1986 the Safe Drinking and Water Act banned lead piping in the U.S. However, many of the buildings in low income areas have not overgone renovations since this time, as the schools themselves do not have as much money.

According to Anderko, lead is most harmful when ingested orally, so elevated levels in drinking water outlets more of a concern than lead in non-drinking water. MCPS has instructed all water outlets with lead levels above 20 ppb to be shut off. In some cases, the water sources found to have elevated levels were from faucets that do not provide drinking water. However, some water fountains did have levels higher than 20 ppb, with one water fountain in a classroom reaching as high as 42.5 ppb at New Hampshire Estates Elementary School.

Many water sources contained lead levels that are deemed passable by MCPS standards, but are considered elevated by multiple other local standards. The American Academy of Pediatrics (AAP) puts its standard at no more than 1 ppb. Prince George's County Public Schools (PGPS) acts on lead levels higher than 10 ppb, and D.C. Public Schools (DCPS) acts on five ppb. In schools such as Laytonsville Elementary School, water fountains that tested over 10 ppb of lead are still running, while at PGPS or DCPS, those fountains would be shut off.

The reason why EPA standards are set much higher, is because they are put in place with a general population in mind. "The standards for drinking water are set not with children in mind but with adults," Anderko says. For children, it is advised to set standards lower, because they are at a higher risk for lead poisoning. "There's always a risk even with very low amounts particularly for children. Children are far more vulnerable and at risk depending on their age," she continues. For this reason, the AAP has its standards set at 1 ppb of lead.

Eight out of the 12 schools found to have elevated lead levels are elementary schools, which poses added concern. Rebecca Robert, a parent of a student at Rolling Terrace ES -- where elevated levels were found -- and a pediatric nurse practitioner, is in support of lowering the tolerable lead standards for MCPS. "The level of action is what needs to be brought down so that they are in line with AAP. The more we know about lead the more you want lead levels lower not higher. The idea that you wouldn't have brought that down with all we know about lead is unbelievable to me," she says.

Though MCPS prides itself on high academic achievement in relation to bordering districts such as PGPS and DCPS, it is lacking in ensuring the health and safety of its students. Clean drinking water should be an expectation for students regardless of their status, and to ensure it, lead standards must become stricter, eventually matching the AAP's recommendations.

Update on 9/9/18: As of Aug. 3, 2018, 238 out of 13,248 water outlets tested in a total of 208 schools had elevated lead levels. One-hundred-fifty-three of the reported elevated outlets were accessible to students. According to MCPS Environmental Team Leader Brian Mullikin, the county is working on remediation measures, with post-remediation testing to follow. "Remediation measures will be the replacement of the outlet and piping associated with that outlet and any valves associated with that outlet," Mullikin says.

On Aug. 13, the Montgomery County Council of Parent-Teacher Associations (MCCPTA) Vice President of Advocacy Laura Stewart sent a message through the MCCPTA listserv notifying PTA presidents at individual schools about the lead testing and providing a link to the full report. Stewart requested that the information be sent to each schools' listserv. The message also informed readers that they can request outlets testing between 5-20 ppb to be turned off by the school's principal. Additionally, the email stated that a Safe Water committee is in the works within the county-wide PTA. The county plans to look into the effectiveness of the action level of 20 ppb. "We're aware that other jurisdictions are using other levels, and that's part of our further research into this program," stated Mullikin.