He hoists the video camera in a steady hand, its lens as his only source of vision, as he maneuvers his way through Blair's hallways like a hunter scoping out his prey. He comes to a halt as he approaches a classroom door and closely observes its doorknob, the focus of his lens. Twisting and turning into a variety of angles, sophomore Nic Weinfeld searches for the perfect shot. 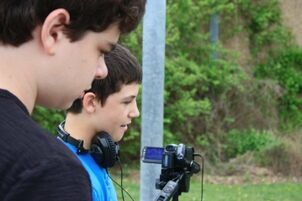 Photo: Coffey and Weinfeld observe their shot before they begin to start shooting for a short film. Picture courtesy of Nic Weinfeld.

Photo: Coffey and Weinfeld observe their shot before they begin to start shooting for a short film. Picture courtesy of Nic Weinfeld.

The filming is a part of Weinfeld's work on his latest short film production funded by Silver City Productions (SCP), a company he co-founded with Bethesda-Chevy Chase (B-CC) Baron Michael Holland. The other company members are Blair sophomores Molly Ellison, Dan Friedman and Nick Coffey and B-CC sophomore Karl Kiser. The company has been working towards a future in filmmaking since its formation in the summer of 2009.

SCP derives its name from Silver Spring, Weinfeld's hometown. The company stays true to its roots, filming and photographing locally in hopes of representing Silver Spring in film festivals throughout the nation.

The concept of SCP was developed after Weinfeld and Holland brainstormed ideas during a get-together at the end of the 2008-09 school year. "We both love the art of filmmaking and decided that it would be a great idea to team up," Holland says. "We both have a good amount of experience and compliment each other's strengths and weaknesses." 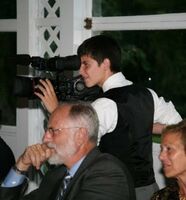 Photo: Weinfeld concentrates on his shot as he films a wedding video on a job. Photo courtesy of Nic Weinfeld

Photo: Weinfeld concentrates on his shot as he films a wedding video on a job. Photo courtesy of Nic Weinfeld

Together, the young entrepreneurs started work on their first job of the summer ¨C a wedding video for Weinfeld's cousin. "My cousin offered me the opportunity to make a wedding video for my resume," Weinfeld explains. "That's how it all started. I got a job and said, 'Wow, I'm good at this. Maybe I should start charging.'"

Ellison, who was a member of the Film Club at Blair in her freshman year, joined the company upon Weinfeld's request. Over the course of several months, the rest of the company roster fell into place. Meanwhile, jobs - including a second wedding video and a music video for underground rap artist and 2005 Blair alumnus Cashflow - began to roll in. The money earned from these projects was channeled into funding the production of short films to display the company's evolving talents to larger audiences. "We started having money for short films and as our films would get better with time, we required more money," Weinfeld says. "The workers are supportive of this and realize that they can't always get paid ¨C the real value is in the art."

Weinfeld views filmmaking as his creative outlet and his experience as a step forward in his growth as an artist. "Filmmaking is just another art form I need to master," he says. "The art is in taking a new approach to something simple and making it our own."

Passion in the picture

Members of SCP are driven by the passion they have for creating art and their undivided love for filmmaking; money is secondary. "It's really just a perfect venue of expression," Friedman, SCP's photography specialist, says. "Money isn't too much of a motivation factor for us ¨C it's just a plus."

Similarly, Ellison claims her appreciation for filmmaking is rooted in the extent of communication it allows and the exposure to its largely social environment. "I love filmmaking because of how you can use it to communicate your ideas and express yourself," Ellison says. "By being in the company, I am able to get hands-on experience and can meet people that I might not meet otherwise." 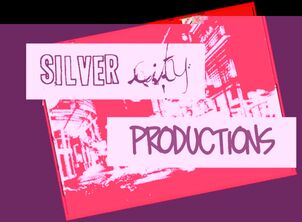 Photo: The Silver City Productions logo emblazons the name of the company over a backdrop of Downtown Silver Spring. Picture courtesy of Nic Weinfeld

Photo: The Silver City Productions logo emblazons the name of the company over a backdrop of Downtown Silver Spring. Picture courtesy of Nic Weinfeld

Each of the company members has experience in media production. Besides being a former member of both the Humanities and Communications Magnet in Eastern Middle School and the Communication Arts Program (CAP) at Blair, Friedman has been working independently on his photography skills since middle school. Others in the company have their own diverse experiences. Ellison, a current CAP student, volunteered for SilverDocs at the AFI Silver Theater over the summer. Weinfeld has participated in the Interlochen Center for the Arts summer sleep-in camp in Interlochen, Mo.

Weinfeld acknowledges that there is some friendly competition between the members of the company. "We definitely all get along really well," he says. "As we're all sophomores in media, there's some inevitable competition, but we work harder for it."

Despite the competition, Weinfeld and his company make sure that they support one another. Weinfeld, Ellison and Holland each look forward to taking their interest in media production to the next level with full-time careers in filmmaking. "We're all really into helping each other and providing assistance when needed on individual projects," Weinfeld says. "It's important to remember that filmmaking is something best done in crews."

Though he is unclear about specifics, Holland feels passionate about filmmaking and hopes to create a documentary in the future. Ellison has been involved in the founding and organization of "Flimheads," a teen film festival set to take place in April 2010. She too hopes to have a future in movie-making. "My dream in life is to be a film director and to be in the film industry," Ellison says. "After high school I want to go to film school so I can learn more about filmmaking and the business."

After participating in the Interlochen sleep-away camp, Weinfeld was offered a $30,000 tuition scholarship to attend the arts school in his junior year. In addition, he has taken on an internship with Discovery Communications headquarters in Downtown Silver Spring to assist the staff in editing the popular television program, Mythbusters. Weinfeld is sure that his future lies in filmmaking, but still feels uncertain about which path he will take. "I'm looking at a lot of different choices for colleges right now," he says. "After that, I'll hopefully be making movies in Hollywood."

With that, Weinfeld pulls a camcorder out of his backpack and turns it on with a slight push of a button. He levels his face with the camera and peers through the lens. His grin spreads to the far corners of his cheeks as he realizes that he's looking at more than a row of lockers - he's catching a glimpse of his future.


Dennis Chae. Whhaazzaaa, I'm Dennis Chae. I love my Baltimore Ravens and shoes. In fact, I collect sneakers and am always looking for a new pair of Nikes. The Ultimate Fighting Championship is probably going to be the greatest thing ever in a year or so. I … More »