Moving on to greater gigs

Shortly after 6 p.m., the band takes the stage at the 9:30 Club. Their sound check is enough to make their front-row fans to erupt in cheers. But they aren't a big rock band performing a gig on a national tour. They are The Agiles, a self-described alternative rock band made up of mostly members from Blair.

Photo: The Agiles perform "Wha-Oh? Oh No!," an audience favorite.

Photo: The Agiles perform "Wha-Oh? Oh No!," an audience favorite.

Juniors Gabe Kompel, Miles Kelly, Conor Donahue and Charles E. Smith Jewish Day School sophomore Yitzy Holton-Henshaw started the Agiles in April 2009. With only a year and a half of gigs behind them, they captured the attention of the Next Big Thing Tour, a battle of the bands competition that offered them a chance to play at the 9:30 Club. Another Blair band, A Place in Time, recently played their first show at Sonar in Baltimore. For these bands, opportunity to play at pro venues while still in high school is an irreplaceable learning experience. 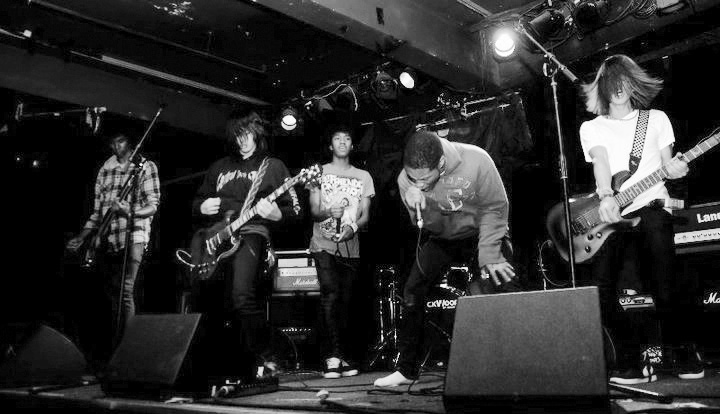 A Place in Time

Photo: A Place in Time rocks out in the middle of their set at Sonar.

Photo: A Place in Time rocks out in the middle of their set at Sonar.

According to junior Jabari Goulbourne, A Place in Time's bassist, the band, which includes junior Duong Glover, sophomore Kevin Nahn, and three other members from Springbrook and Northwood, came together in mid-2009 after several other local bands broke up. A Place in Time started playing small shows at venues in Mt. Airy and Baltimore in the months that followed. Despite the location of their shows, the band was still successful in building up a local fan base.

The Agiles started similarly small. After forming in May 2009, the band played their first concert in the basement of a church that summer. Shows at small venues and local festivals and battles of the bands soon followed.

Despite initially slow ticket sales, Goulbourne says that the show was a success thanks to enthusiastic fans that made the trip to Baltimore. The band says it was one of the biggest shows they've played. It won't be their last, either. A Place in Time already has plans for another Sonar show in February.

Even without another Blair band to support them at the 9:30 Club, The Agiles appear calm in the minutes before they take stage. Donahue manages to squeeze in some last-minute guitar tuning by the bar, able to concentrate despite the loud riffs from the band that is just wrapping up its set. Despite their experience, Koempel says that all of the members get nervous performing. Donahue jokingly announces that he might just pee his pants.

Goulbourne said that A Place in Time doesn't have to deal with nerves before performances, even at bigger performances. "We never get nervous. We all feel like we can do anything when we get up on stage in front of a lot of people who love our music," he says.

If the Agiles were worried, it wasn't apparent by the time they started their 20-minute set. By their second song, the members couldn't help but grin as a group of screaming Blazers in the front row reached for them. Koempel, Donahue and Holton-Henshaw jumped around while playing guitar and Kelly became a crowd favorite when he took a break from drumming to play the accordion.

Photo: The audience at the 9:30 Club sings along to "Little Boy" by The Agiles.

Photo: The audience at the 9:30 Club sings along to "Little Boy" by The Agiles.

At the 9:30 Club, The Agiles thrived on audience participation, as the crowd tossed around beach balls and waved their cell phones when Holton-Henshaw began to sing a slower song. A Place in Time also savors this sort of enthusiasm. "My favorite part about playing shows is seeing the crowd go wild at breakdowns and being able to hear people sing along with to lyrics that we wrote," says Goulbourne. Lead singer Glover agrees, adding that hooking the audience is also part of the fun. "The best part is getting the crowd interested and having fun," he says.

Both bands are excited to have the opportunity to expand their fan base with shows. Koempel said that the 9:30 Club show introduced him to many new people who promised to look up the band on Facebook. Reflecting on their first time at professional sized venues, each band had nothing but good things to say. "It was unbelievable - the best gig we've ever played," says Koempel.


Claire Boston. Claire Boston aspires to one day be as cool as Grace Coddington, Meryl Streep and Zelda Fitzgerald before she went crazy. Claire's interests include wearing neon tights, shunning serial commas and coming up with nicknames that distinguish her from the two other Claires on Silver … More »