Every NBA season there are 6 major awards given out to the best player of those respective fields. The awards are the MVP (Most Valuable Player), ROY (Rookie of the Year), DPOY (Defensive Player of the Year), 6MOY (6th Man of the Year), MIP (Most Improved Player) and COY (Coach of the Year). There are 3 candidates for each award every year. Here we will try to predict both the 3 candidates and the winner of all the awards, which will be given out at the NBA Award show on June 25th.

James Harden has showed all season why he deserves the MVP award. He deserved it last year but with Russell Westbrook's historic season, Harden was an afterthought. Harden currently leads the league in points per game with 30.7 and is 3rd in assists per game with 8.8. His Rockets have already surpassed the 60 win mark and that has been without Chris Paul next to him for almost 15 games this season. Harden has made an extremely strong case for the top award this season.

LeBron is the best basketball player in the world and has been since he entered the league in 2003. Although the Cavaliers have taken a major step back this year both defensively and in the standings, LeBron has continued his strong case for the MVP like he does every single year. Without LeBron, the Cavaliers would most likely not be in a playoff position.

The Pelicans had a slow start to the season. Then Boogie and the Brow put it together and started winning some big games. Then DeMarcus Cousins went down and was out for the season. Without the Pelicans second superstar, Anthony Davis has picked up his play and led his Pelicans to a high playoff position after many thought the Pelicans were done and out. His MVP-like play has allowed the Pelicans to stay afloat.

Rookie of the Year:

Although he was drafted with the 2016-17 class, Ben Simmons has showed why he was a number one overall pick. His leadership and playmaking ability has lead the 76ers to an incredible season and has made them get back to the playoffs for the first time in 6 years. His shot is awful but teams still can't find a way to stop him, that's just how good he really is. 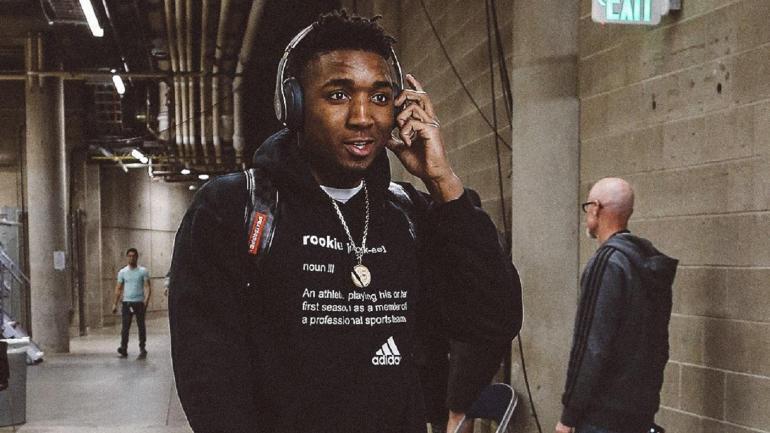 Photo: Rookie of the Year Candidate Donovan Mitchell of the Utah Jazz throws shade at Ben Simmons of the 76ers, who is a ROY candidate despite being drafted in 2016

Photo: Rookie of the Year Candidate Donovan Mitchell of the Utah Jazz throws shade at Ben Simmons of the 76ers, who is a ROY candidate despite being drafted in 2016 Photo courtesy of Sports Canyon.

When the Jazz drafted this guy people wondered what kind of impact he would have. At first it didn't seem like he would do much for them. Throughout the season, Mitchell has been the Jazz's most consistent offensive player. Since the all-star break Mitchell lead the Jazz on a 10 game win streak to put them back in playoff contention. Without Mitchell's offense, the Jazz would be completely lost and at the bottom of the barrel in the western conference.

With the injury of Gordon Hayward on the first game of the season Jayson Tatum has stepped into the role of the Celtics starting small forward. His scoring touch has been extremely consistent all season and he is averaging 14 points this season. He has helped the Celtics cruise into the 2 seed in the eastern conference.

Joel Embiid has been a staple all season in the paint for the Sixers. He has been a menace for opposing teams with his shot blocking and rebounding abilities. Even without practicing with the team he has still fit right in with Brett Brown's system around his teammates.

Drummond has had an incredible bounceback season. He was an all star this season and is leading the league in rebounding with an incredible 16 rebounds per game. He single handedly kept Detroit in the playoff race with no one around him knowing how to play any sort of defense.

The Jazz have been on a tear since Gobert came back from injury earlier this season. Since he came back the Jazz have been one of the top defensive teams in the NBA and he has been the anchor of it all. His stout inside presence along with his ability to step along the perimeter and defend quicker players has lead the Jazz back into the playoffs for the second straight season.

Sixth Man of the Year:

Gordon has been just as good this year as he was last year, if not better. He does everything the Rockets ask him to do. He comes into the game and knocks down big shots in the clutchest of moments. He has stayed healthy all year which is Gordon's biggest problem and he has shown how incredible he can be while healthy.

Sweet Lou is a professional scorer and that's exactly what he does. He comes into the game to score, score and score some more. His run for the all-star team may have been a little ridiculous but even to think that a bench player could make the team is an incredible feat in itself. He has been the Clippers best player this season coming off the bench.

His short stint with the Cavaliers was better than people think. Wade may have not defended in the land but he certainly made some highlight plays with LeBron at his side. Once he got back to Miami, Wade really turned it on. He has been their best player since returning home to the Heat coming off the bench behind Tyler Johnson.

Not having John Wall this season was a blessing in disguise for Beal. He became an all-star and started perfecting his scoring touch. Teams could never figure Beal out and still can't seem to defend him. He has not been as afraid to be more aggressive on the offensive end and has gained so much confidence that every time he puts up a shot, you think it's going to go in.

When the Pacers traded away Paul George for Domantas Sabonis and Victor Oladipo it seemed as though the Thunder had gotten a complete steal of a trade. As the season rolled on, the tables seemed to turn and it looks now like the Pacers had gotten the steal. Oladipo made his first all-star appearance this season and has lead his Pacers to the 5 seed in the east after many thought they would be sitting at the bottom of the barrel.

As I said before, Drummond has had a complete bounceback season. He looked slow and ineffective last season and this season, Drummond has been one of the Pistons lone bright spots. He needs help around him to be better than they are right now but he lead the Pistons to 37 wins basically by himself.

Coach of the Year:

The Rockets are going to finish at least five games ahead of the second place team in the NBA. D'Antoni's fast paced offense has lead this team to the top ranked offense in the NBA along with the 7th placed defense. D'Antoni may have won it last year but you could make the case that his team has been even better than it was last season.

The amount of injuries the Celtics have endured this season has been brutal. He has still lead them to the 2nd top team in the eastern conference with so many young players. Stevens may be the best coach in the NBA and might still be underrated as a coach.

The coach of the Pacers came into the season with extremely low expectations as his team gave away their franchise cornerstone in a trade this offseason. He has coached them into the playoffs with incredible talent around him and a much deeper bench than many think.