This week promises some of the best match-ups we've seen all season. We've trimmed the fat and weeded out the weaker teams; all that's left is unadulterated gridiron action. Through injuries, sideline drama and doubt, these four teams have worked hard for the chance to battle it out for a spot in the first Super Bowl of the new decade. 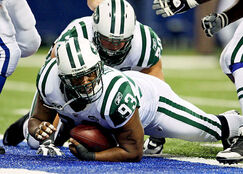 Photo: Marques Douglas scores a touchdown for the New York Jets in the first meeting with the Indianapolis Colts.

Photo: Marques Douglas scores a touchdown for the New York Jets in the first meeting with the Indianapolis Colts. Photo courtesy of The New York Daily News.

Whether it's a new team with an old quarterback, an inspired team finally making a name for itself, a fresh and rambunctious team raring to go or a team that's seem many playoffs in its time, these athletes are pulling out all the stops. Only two can make it to the Championships and we're lucky enough to witness the warfare.

Rose says:
There's no doubt the Jets are on fire. But Peyton Manning has one of the best passing games in the league and the Colts' defense limited the Rams to only 87 yards last week. Indianapolis is powerful against the run, but New York has a potent rushing game to bring to the field. While the reliable 15-2 Colts are the instinctive pick, the Jets have been playing incredibly in post-season and are one of only two teams that beat out Indianapolis this year. The Jets may just surprise everyone and make it to the Super Bowl.
Dennis says:
Indianapolis is going to cut the Jets' playoff run short. Sure Shonn Greene has been putting up some big numbers over the last few weeks and Mark Sanchez is looking like a veteran quarterback. But there's a real veteran quarterback starting this game: Peyton Manning. The Jets aren't airborne enough to stop the Colts' passing game. The AFC crown goes to the Colts once again.
Ava says:
Undefeated or not, I can't pick against the Colts. The Jets are really hot right now and Mark Sanchez has shown he is undoubtedly a playoff quarterback, but he just can't stack up against the playoff experience of Peyton Manning and his team. Sure the Colts might get the wind knocked out of them by this fiery young team with a new coach, but Manning's arm is unwavering and Indianapolis plays like they read each other's minds. There is a definite possibility of an upset, but I'm sticking with ol' reliable.

Rose says:
Against the NFL's highest scoring offense, an injury-laden Minnesota team isn't looking too potent. Both defensive end Ray Edwards and defensive tackle Kevin Williams are facing knee problems that may keep them from playing to their full potential this Sunday. Versatile Offensive Rookie of the Year Percy Harvin is also injured, which may hinder the Vikings' ability to put out a powerful offense against the Saints. Nonetheless, Minnesota still has explosive Adrian Peterson and successful Brett Favre to do some damage. Although New Orleans will need to step up their defense to achieve a victory in this important NFC title game, their home field advantage and Vikings injuries may be enough to propel them to the Super Bowl.
Dennis says:
This season, New Orleans has one of its most complete teams in franchise history. The Saints are equipped to deal some damage on both sides of the ball and will shut the hot Vikings down. This is the most intense of the two Conference championship match-ups because both teams have been consistent NFC powerhouses all season long. If Drew Brees can pull off another game, there may be a Super Bowl victory in sight for the Saints.
Ava says:
This is the first conference championship ever to take place in New Orleans and Saints fans are sure to be riled up for the occasion. With Drew Brees, Reggie Bush and the Vikings' stellar offense on the same field, fans can surely expect a high-scoring game; offense is key in this match-up. Brees and Bush can run the Vikings' defense up and down the field all day long, but Favre won't be able to make up many lost points on the Vikes' side of things. Especially with superstars Percy Harvin and Kevin Williams "questionable" on the injury front, the Saints will take this one at home.