The division playoffs bring us another week closer to the Superbowl and the match-ups are more intense than ever. As we gear up for the conference championships next weekend, teams' momentum, resting time and season-long consistency all come into play. Arizona, Baltimore, Dallas and the Jets have energy from last weekend's wins, but taking on New Orleans, Indianapolis, Minnesota and San Diego will take strategy and strength. 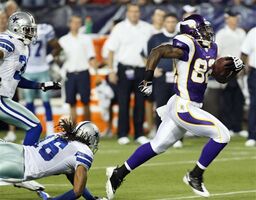 Photo: The Cowboys take on the Vikings in Minneapolis on Sunday.

Photo: The Cowboys take on the Vikings in Minneapolis on Sunday.  Photo courtesy of The Examiner.

Though the end is near, last week was full of surprises. We were reminded that these last weeks are when the action really gets good. Sure, there are exams to prepare for, but there's no better way to take a study break than by watching football. So Blazers, at least for a little while, put the books down, pick up the remote and cheer on your favorite teams.

Rose says:
The Cardinals just don't have what it takes to win this match-up. Against Arizona's 3-4 defense, New Orleans is well-versed in success. Besides, the Cardinals just had a rough overtime face-off with Green Bay in which their weak secondary was revealed. With a top-ranked offense, the Saints pack in a win.
Dennis says:
With Anquan Boldin back in the line up, the Cards' pass attack may be even better than it was last week against Green Bay. New Orleans has been falling off the radar lately and may be a bit rusty after the bye. If the Saints' pass defense falters at all this week, we could see the Cards make a reappearance in the Super Bowl.
Ava says:
Kurt Warner is a great playoff quarterback, and the Saints haven't had a meaningful game in weeks. Second stringers aside, they also haven't played well for a long time and their starters may be a bit rusty. Warner has certainly got the momentum going (379 yards and a whopping five touchdowns last week). The Saints are going to struggle.

Rose says:
The Colts have the obvious edge on this game. With numerous play-making receivers and a quarterback who has just received the NFL MVP Award for the fourth time, Indianapolis can pull off another victory over the inconsistent Ravens. Baltimore just doesn't have a passing game that can compare to the Colts' second-best pass yards in the league. Colts catch the divisional title.
Dennis says:
The Ravens have really found their identity as a run-first offense and they're holding up defensively as well. But the first-seed Colts seem to have fallen out of rhythm in the last couple of weeks, even though they benched their starters. Additionally, Ray Lewis is comfortable playing against the Peyton Manning-led offense and Ray Rice is a threat in any situation. Ravens move on.
Ava says:
I'll take the Colts in a minute! Despite the Ravens' big win against New England last week, Peyton Manning will take care of business. Like New Orleans, however, the Colts have had some time off. But Peyton Manning knows how to deal with lost playing time and the Colts have a quality coaching staff to help them with strategy, which is more crucial now than ever. Indianapolis' veterans know how to turn their A-game back on during the playoffs.

Rose says:
Here are the facts: Dallas is on a roll, but Minnesota hasn't lost at home this season. While both QB Tony Romo and QB Brett Favre have been hot this year, Favre's job was to bring in post-season victory for the Vikings and he's likely to do a great job of it. Although the Cowboys have surged past their opponents in these last few weeks, the Vikings have the power for offensive points and rushing. They'll bring Favre even more glory this Sunday.
Dennis says:
Minnesota has to watch the connection between Tony Romo and Miles Austin if it wants to shut down the 'Boys offense. Adrian Peterson also has to carry the running game on his shoulders once again and reinstate why he was the Rookie of the Year a couple seasons ago. Dallas won't be able to stop a team with star receivers and running backs.
Ava says:
Dallas is the hottest team in the NFL right now, so this will be a very interesting game. The Vikings are a quality team, but Romo is definitely bringing the pressure. The Cowboys are going to tear through anyone who stands in their way. That's not to say that Minnesota won't put up a good fight, but Dallas has been playing consistently in all aspects of the game and will shut things down.

Rose says:
MVP-worthy candidate QB Philip Rivers will make it difficult for the Jets to repeat last week's victory. Although San Diego faces a powerful Jets running game, New York should fear the Chargers' potent passing. San Diego should still manage to conquer the Jets' talented defense and end their crazy post-season ride. Chargers charge to the championships.
Dennis says:
The Jets have been on quite a roll lately and all of a sudden, they look ready for the playoffs. "Revis Island" has been a key factor for New York this whole season and Vincent Jackson's performance against him will have a big influence on the game's outcome. With a Jets running game on the move, an upset in San Diego may be in place.
Ava says:
The Jets are currently running on good luck; the Bengals didn't play well last week and New York squeaked by. The Chargers have been one of the most consistently good teams in the NFL and will definitely come out strong after a week of rest. The Jets can only coast on other teams' mistakes for so long.