Although a new school year means leaving the fun heat of summer and replacing it with a full day of education, it also means that SCO's NFL Prediction team is back! This year we have no returning team members from 2015, but with four new members we're ready to get the season started. Sports editor Ben Yokoyama is joined by staff writers Ryan Handel, Nate Bodner and Ellie Williams to pick every game this NFL season. Every football fan is excited for week one, but with a Super Bowl rematch to kick off the season, the slate is even better than expected.

Ben says: This may be the only game where the Panthers defense is not the best in the stadium, but Cam Newton should squeak out this win.
Nate says: Broncos lost key figures on offense and defense. They won't beat Carolina with a QB who's never started an NFL game
Ryan says: Without the strong leadership of Peyton Manning, the Broncos will crumble. The revamped Broncos offense will be no match for Kuechly and the Panthers D.
Ellie says: Broncos defense will hold up against the Panthers' strong offense, even without Jackson and Trevathan.

Ben says: The Titans are always a disaster. A quick QB replacement with Sam Bradford is an easy fix for Teddy Bridgewater's injury.
Nate says: Yes, Teddy Bridgewater is out for the season. But it doesn't matter. Adrian Peterson and a proficient defense will lead the Vikings to a dub.
Ryan says: Marcus Mariota will make this the year that the futile Titans finally perform, and fragile Sam Bradford will be unable to outduel him.
Ellie says: With two viable options for quarterbacks, the Vikings can take on the Titans' weak offense.

Ben says: Jay Cutler is sooooo bad.
Nate says:Texas has a ton of offensive weapons and the Bears failed to improve off a disappointing 2015 campaign.
Ryan says: The Bears will be no match for the J.J. Watt-led Texans, who are a Super Bowl contender after acquiring Brock Osweiler.
Ellie says: Brock Osweiler and Lamar Miller will lead the Texans to victory on their home turf.

Ben says: Carson Wentz can't carry a team yet, and RG3's success seems to come when he's not married…
Nate says: It's the Browns. Without Josh Gordon. Come on
Ryan says: Look for the Browns to steal one here as Carson Wentz makes too many rookie mistakes in his first NFL game.
Ellie says: The Eagles' solid offense will take advantage of the Browns' spotty defense.

Ben says: The Bills are another team you can never trust, no matter how good their team looks.
Nate says: Coming off an injury ruined 2015 season you better believe the Ravens will come out swinging this year.
Ryan says: Football is won in the trenches, and the Bills' tough offensive and defensive lines will get the job done against the Ravens.
Ellie says: The Bills will crumble under the Ravens' healed offensive. 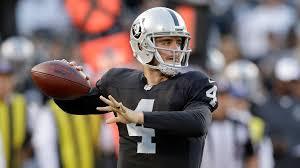 Photo: Quarterback Derek Carr is looking to improve on a good 2015 season.

Ben says: Oakland has improved for so many years. It's their time now.
Nate says: The Saints defense is one of the worst in the league, and Derek Carr and Amari Cooper have an ever growing connection on offense. Raiders all the way.
Ryan says: The Oakland passing attack will smoke the weak Saints secondary to earn the Raiders a week 1 victory.
Ellie says: The Saints' sad defense doesn't stand a chance.

Ben says: If you try to make the argument for Winston, Martin and Evans, you can make a better argument for Matt Ryan, Devonta Freeman and Julio Jones.
Nate says: I don't care what you say about the Falcons. The combined skill of Jameis Winston, Doug Martin and Mike Evans is scary. It's a division game. Anything is possible.
Ryan says: Matt Ryan has been declining for years, while the Buccaneers are a team on the rise.
Ellie says: The Buccaneers will bring it with their strong offense led by Jameis Winston.

Ben says: The Jets have arguably the best D-Line in the league and two great receivers.
Nate says: The combined power and skill of Jeremy Hill and Giovani Bernard are going to wreck havoc among the Jets front seven.
Ryan says: The dominant Jets D-line will stuff Hill and Bernard and force Dalton into costly turnovers.
Ellie says: The Jets have a solid roster that will overwhelm the Bengals.

Ben says: Blake Bortles is the man.
Nate says: Best QB in the league, with all his weapons back.
Ryan says: Aaron Rodgers and the Packers will eke out a win over the suddenly tough Jags.
Ellie says: Receivers Allen Hurns and Allen Robinson will secure the win.

Ben says: They still have a top three defense and Ryan Tannehill is still a disappointment.
Nate says: While the RB situation is uncertain, Russell Wilson and the Legion of Boom will be enough to get a win.
Ryan says: Ndamukong Suh will punish the Seahawks weak O-line and lift the Dolphins to the upset.
Ellie says: The Seahawks' QB will dominate the Dolphins' defense.

Ben says: I hate Ezekiel Elliott, I hate Jerry Jones, I hate the Cowboys.
Nate says: Dak Prescott and Zeke Elliot are going to have the edge over this defense. Say what you want about the Giants spending $200 million in the offseason, but guess what? They did that a few years ago and it didn't help that much then.
Ryan says: With the league's best offensive line and three running backs that are arguably all better than any Giants RBs, the Cowboys ground game will have a hayday against the Giants.
Ellie says: Questionable QB Dak Prescott won't hold up against the Cowboys' revamped D-Line.

Ben says: I think the Lions will be awful this year, but Andrew Luck needs time to get back into his game.
Nate says: Andrew Luck is back. His wide receivers look great. That's a win.
Ryan says: Matthew Stafford will be lost without his favorite target Calvin Johnson as Luck begins a strong rebound from a poor showing last season.
Ellie says: Even without Calvin Johnson the Lions' offense can pull out a win against the Colts.

Ben says: I can't pick against a defense like that playing a young quarterback.
Nate says: With starting QB Tom Brady and starting RB Dion Lewis out, the Pats are set up for a tough loss in Arizona this weekend.
Ryan says: Brady is suspended, but the Patriots still have the NFL's best coach. Belichick will find a way to win against the more talented Cardinals.
Ellie says: The Cardinals won't be able to block the Patriots' excellent passing.

Ben says: I going to pick them every week by the way.
Nate says: Cousins has to prove himself this season. And with arguably the best pass catching corps in the league, I think the Skins can pull out a win at home this week.
Ryan says: Although Bell is out, Roethlisberger, Brown, and DeAngelo Williams are a trio good enough to take down the ‘Skins.
Ellie says: The Steelers can move the ball and the Redskins aren't strong enough to stop them.

Ben says: It's easy for professionals to stop a running back if they know there won't be any passes to go with it.
Nate says: The Rams will have it easy against Blaine Gabbert, who didn't prove himself last year as the starter in San Francisco.
Ryan says: Jeff Fisher does need 7 wins to get to his signature 7-9 record. He'll get one here as Gurley will run all over the lowly 49ers.
Ellie says: The 49ers are no match for Todd Gurley or Aaron Donald.