Follow our prediction team as they give their picks for every game this NFL season!

The injury demon struck early, with stars like David Johnson, Allen Robinson, and Danny Woodhead all leaving Sunday with serious, if not season ending injuries. Will their coaches and back-ups be able to lead their teams to victory this week? 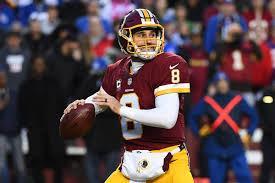 Photo: Can Kirk Cousins and the Redskins rebound this week? See what our team has to say.

Photo: Can Kirk Cousins and the Redskins rebound this week? See what our team has to say. Photo courtesy of SB Nation.

Nate says: After both teams disgusting week one performances, I'm not sure what to make of this game. But give me J.J. Watt over anyone on the Bengals defense.
Ellie says: Both teams flopped week one but the Texans will be missing their starting left tackle and most of their go-to tight ends.
Noah says: The Texans had a disappointing loss in week one but the Bengals were even worse.
Eric says: The Texans had one of the worst debuts in week 1, but the Bengals debut may have been worse.

Nate says: Don't give the Bills to much credit on their nice looking win last week, as it came against the Jets. Cam Newton should be able to pick them apart sunday.
Ellie says: The Panthers need to make up for last year's disaster and should easily overpower the Bills.
Noah says: The Bills frankly aren't good enough to win a football game against a decent team.
Eric says: The Bills won against the Jets last week, but will crumble against an experienced team like the Panthers.

Nate says: One of two teams to not play last week, expect the Bucs to come out strong in their debut.
Ellie says: The Bears put up a good fight last week but Tampa Bay's offense will pose more of a threat than Atlanta's.
Noah says: The Bears came up short against a really good falcons team but the inexperience will catch up to them.
Eric says: The Buccaneers have playoff potential, while the Bears inexperience will cost them another game.

Nate says: Sam Bradford looked very impressive monday night, but the Steelers defense will pose a more serious threat than the weak Saints secondary.
Ellie says: This will be a close game but Roethlisberger always performs better at home.
Noah says: The Vikings showed up in Week 1 against a great Saints offense, and that will translate into another great showing against the Steelers big three.
Eric says: The Steelers and the Vikings are pretty evenly matched, but I believe the Steelers will edge out the Vikings in their offensive game.

Nate says: Tom Brady should tear this incomplete Saints secondary to shreds.
Ellie says: The only thing worse than facing Brady and Belichick on a winning streak is facing Brady and Belichick after a loss.
Noah says: The Patriots will come back from a poor showing last week and demolish the Saints.
Eric says: The Pats had an unlucky game in week 1 and should definitely bounce back against an inexperienced Saint's secondary.

Nate says: Fournette will have another big game for the Jags, but bet on the Titans' Mariota to outduel Blake Bortles.
Ellie says: The Titans are an up and coming team whereas the Jaguars just lost Allen Robinson.
Noah says: The Titans looked good against a great Raiders team last week, but the Jaguars shut down the Texans with 10 sacks.
Eric says: The Titans played an exceptional game against the Raiders, I believe they have the tools and drive to edge out the Jaguars.

Nate says: Kansas City won't make the same mistakes as Washington, so the Eagle's defense won't be able to set up Carson Wentz as nicely. The birds will have a tough time driving the length of the field against that KC defense.
Ellie says: Former Eagles coach Andy Reid is out for blood, and the Eagles defense won't be able to handle it.
Noah says: The Eagles are good but not good enough to beat maybe the best team in the NFL.
Eric says: The Eagles are an underrated in NFL and could definitely steal this one from the Chiefs.

Nate says; Oakland is going to run all over the Jets in their home opener.
Ellie says: Noah says it all.
Noah says: The Jets stink. Game over.
Eric says: The Jets are one of the worst teams in the NFL, they stand no chance.

Nate says: The Chargers looked strong offensively in the second half against Denver, nearly coming back to tie the game late. The Miami defense won't pose as big a threat.
Ellie says: I didn't trust Cutler the first time around, I definitely don't trust Cutler 2.0.
Noah says: Jay Cutler and Adam Gase will work well together just like in Chicago and will pull out a tight victory over the Chargers.
Eric says: The Dolphins were absent in the first, while the Chargers held their own against a strong Broncos team.

Nate says: The Seahawks defense was able to contain one of the best QB's of our generation for the majority of the game last week. I expect them to lock down their lowly division rivals.
Ellie says:The Seahawks are solid NFC contenders while the 49ers are floundering.
Noah says: The 49ers are up and coming but just not there yet against a good and experienced Seahawks squad.
Eric says: The Seahawks outclass the an inexperienced 49ers team.

Nate says: Against a more experienced offense, the Rams defense won't seem nearly as impressive.
Ellie says: The Redskins O line will cost them yet another win.
Noah says: Kirk Cousins looked lost last week without good receiving options and the Rams pounced on the Colts. It will be close but the Rams will pull out the win.
Eric says: Kirk Cousins will have a bounce back week and lead his team to victory.

Nate says: Eli Manning looked incredibly poor last week, while Matt Stafford looked great in a big win. Expect the same from both QB's this time around.
Ellie says: If OBJ plays, there will no contest.
Noah says: It all depends on if OBJ plays. If he plays than the Giants will pull out with little harm. If not than the Giants have more of a test.
Eric says: I faith OBJ is making his debut this week. He is going to push the Giants over the top.