The Redskins recorded their first win of the season, and of the five undefeated teams, two are perennial winners, but there are three big surprises atop the standings (Eagles, Vikings and Ravens). Week four features an intriguing division matchup between the Cardinals and the Rams, while the undefeated Eagles will take their bye week. See what our team has to say this week.

Ben says: Andy Dalton is a proven leader and this team's record doesn't truly show how good they are.
Nate says: Bengals had a tough schedule coming into the season, and they will come out swinging in their first favorable matchup.
Ryan says: The dysfunctional Dolphins barely got past the Browns last week, and they won't stand a chance against the Bengals.
Ellie says: Bengals coach Marvin Lewis will be sure to come up with a plan to break the weak Dolphins.

Ben says: They lose every year and I really thought this year would be different. Hopefully they can pick up their first win of the season.
Nate says: The Jags will grab their first win of the season this week against a Colts defense that has been absolutely decimated by injuries already. And it wasn't even that good to begin with
Ryan says: In a matchup between two of the worst defenses in the league, expect the Jaguars to win a shootout.
Ellie says: The Colts' good red zone offense can hold off the Jaguars, but it's going to be close. 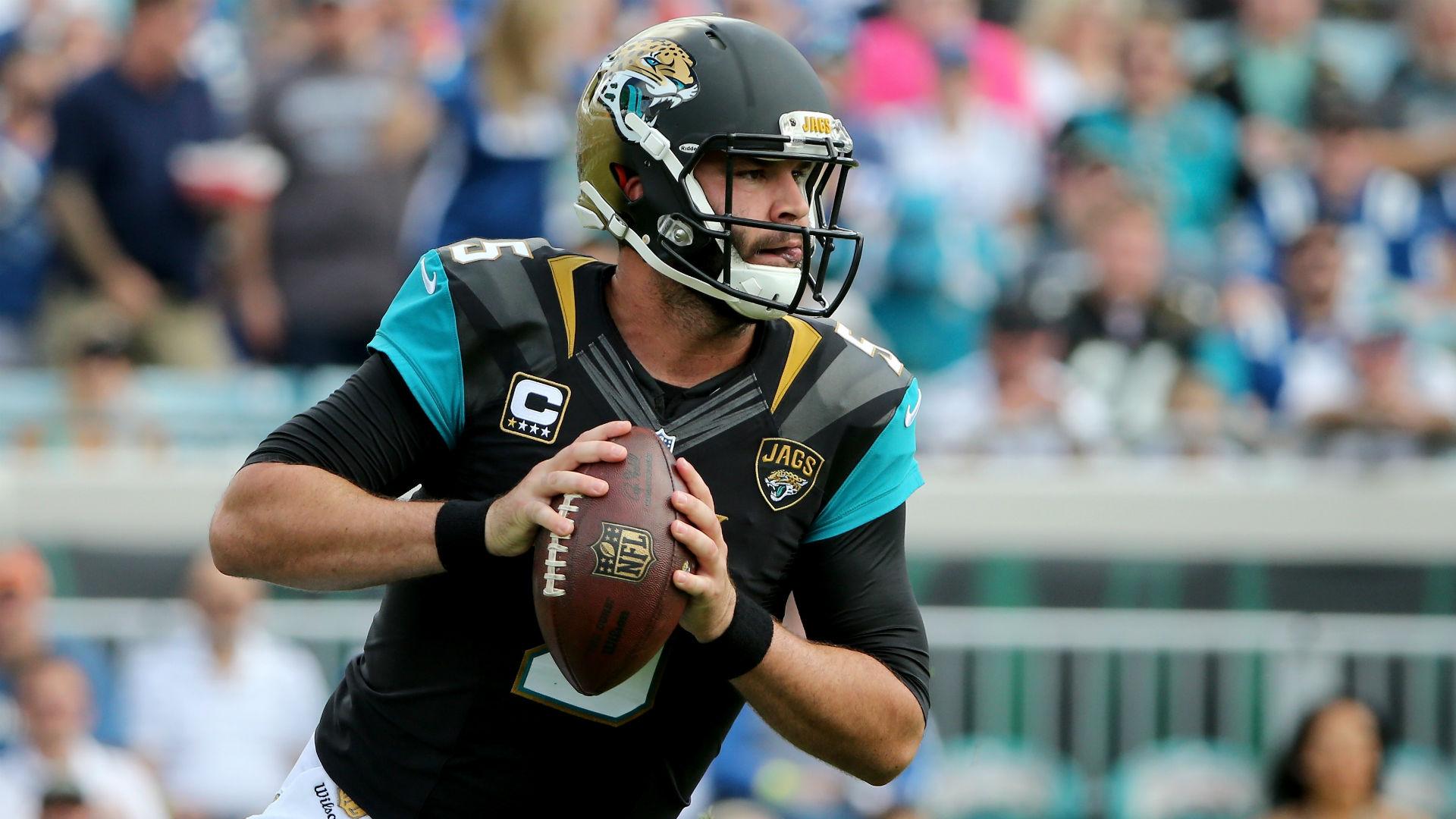 Photo: Blake Bortles and the Jaguars look to take down the Colts playing at home in London.

Photo: Blake Bortles and the Jaguars look to take down the Colts playing at home in London. Photo courtesy of The Sporting News.

Ben says: Easy pick. Rex Ryan can't coach a team and it doesn't matter who's quarterbacking the Pats.
Nate says: Doesn't matter what the Bills did to the Cardinals last week. A road game against division rival New England will surely end in disappointment for Rex
Ryan says: Rex Ryan's luck will run out this week when Jimmy Garoppolo returns for the Patriots.
Ellie says: New England is undefeated and has a rock solid offense.

Ben says: The Texans are still reeling from their shutout loss to the Pats and the harrowing loss of J.J. Watt.
Nate says: Titans do not have enough talent on either side of the ball to defeat the Texans on the road.
Ryan says: The Texans got embarrassed last week and have something to prove against the Titans. Unfortunately for Tennessee fans, the Titans just don't have the talent to compete with Houston.
Ellie says: Houston can beat Tennessee even without Watt, they're still the more skilled team.

Ben says: The Bears have gotten whooped by two rookie quarterbacks and Brock Osweiler… This is an easy one.
Nate says: Bears have nothing going for them so far this season, and nothing will start going this week.
Ryan says: The Lions may not be a very good team, but compared to the Bears they look like Super Bowl Champions.
Ellie says: The Lions are fifth in the league in scoring thanks to Stafford, so the Bears don't stand a chance.

Ben says: I'm not jumping off the Panthers wagon, but I'm hopping on to the Falcons now. Matt Ryan is lighting it up, which isn't hard to do with Julio Jones.
Nate says: Panthers are the best 1-2 team in football, and they've had a heckuva hard schedule thus far. Expect them to bounce back against a poor Falcons defense this week.
Ryan says: Don't be fooled by the Panthers' 1-2 record. They've lost to arguably the two best teams in the NFL right now and are still superior to the Falcons.
Ellie says: The Panthers are going to come back strong this week after a tough loss to the Vikings.

Ben says: They bounced back from a bad loss to the Rams and the Jets are suffering without Brandon Marshall at full health. Jets QB Ryan Fitzpatrick threw six picks against the Chiefs and the Seahawks secondary is even better.
Nate says: With Russell Wilson's position uncertain, the Jets could rebound from a horrendous performance last week.
Ryan says: The Seahawks finally have momentum, while the Jets have quite the opposite after their performance last week.
Ellie says: Ryan Fitzpatrick messed up pretty bad last week and the Seahawks are on the rise.

Ben says: The Ravens have beaten three mediocre teams while the Raiders have put up pretty big offensive numbers so far.
Nate says: The Raiders have been able to compete against solid teams, while the Ravens have played less than fierce competition thus far. Derek Carr and Co will prove too much for Baltimore this week.
Ryan says: The Ravens are proving that last year's injury-riddled season was a fluke, and they are back to their winning ways.
Ellie says: The undefeated Ravens' defense is stepping up, but they aren't ready to take on the second best offense in the league.

Ben says: Finally! I pick the Redskins and they have a good chance of winning.
Nate says: The Browns are godawful. They won't win their first game this week. #HTTR
Ryan says: The Browns have had their first win in the bag the past two weeks and haven't been able to finish. This game they finally pull through for a close win over the mediocre Redskins.
Ellie says: The Redskins are better. Offensively and defensively. They're just better.

Ben says: Jameis Winston has been pretty good other than his performance against a good defense in the Cardinals, but here comes another good defense…
Nate says:Bucs will not be able to fire up their offense at all this week.
Ryan says: After Jameis Winston goes up against the Broncos, Ryan Fitzpatrick's six interceptions may not look so bad.
Ellie says: Broncos QB Trevor Siemian proved himself last week with an impressive win against the Bengals, and the Buccaneers are no Bengals.

Ben says: The Cardinals played an awful game against the Bills last week, bringing them to 1-2. But there is no way a Rams offense can get by this Cardinals defense.
Nate says: Cardinals will bounce back in style this week. The only good team the Rams can beat is the Seahawks
Ryan says: The Rams' game against the Cardinals will much more closely resemble their week 1 showing than their past two games.
Ellie says: The Rams hadn't scored a touchdown until last week so my confidence in them is pretty low.

Ben says: Ezekiel Elliott is fading away, just like I said. Even still, they have running backs to spare and can take down Carlos Hyde and the 49ers.
Nate says: The Cowboys have gotten some lucky wins thus far, but they won't be able to do it again in San Francisco.
Ryan says: The calls for Colin Kaepernick to start are going to get louder as Blaine Gabbert puts up another ugly performance.
Ellie says: Rookie QB Dak Prescott is leading the Cowboys' momentum. They're coming off back to back wins while the 49ers lost their groove early on.

Ben says: Two big offenses go up against each other, but the Saints will bring it home after the Chargers lost Antonio Gates.
Nate says: Drew Brees' 1000+ pass yards over three games will finally mean something this week, as the Saints will win a hard fought offensive battle on the road.
Ryan says: Keenan Allen and Antonio Gates are gone, but Philip Rivers still has Travis Benjamin to light up the Saints defense.
Ellie says: The Chargers were so close last week against the Colts. Both teams have an impressive offense, but New Orleans' defense won't hold up.

Ben says: Playing at home with an unsuspended Le'Veon Bell, the Steelers are ready to make their move toward the playoffs.
Nate says: The hype train has completely left Kansas City, as everything seems to have fallen apart thus far. Steelers, with Le'Veon Bell, should make short work of visiting Chiefs.
Ryan says: The Steelers will flip the script on their 34-3 loss and beat down the Chiefs with Le'veon Bell in the backfield.
Ellie says: Pittsburgh will come back from their fall to the Eagles this week with Le'Veon Bell, Ben Roethlisberger and Antonio Brown all in play.

Ben says: I don't know how the Vikings are undefeated, but playing at home again with their outstanding defense it should be another win for the Vikings.
Nate says: Vikings defense will be enough to propel Vikings to another win.
Ryan says: If the Vikings' defense can shut down Cam Newton and the Panthers, it can definitely shut down the Giants.
Ellie says: The Giants offense doesn't have enough tools to bring down the Vikings' strong defense.